By Laurel White, Wisconsin Public Radio - Dec 14th, 2020 01:34 pm
Get a daily rundown of the top stories on Urban Milwaukee 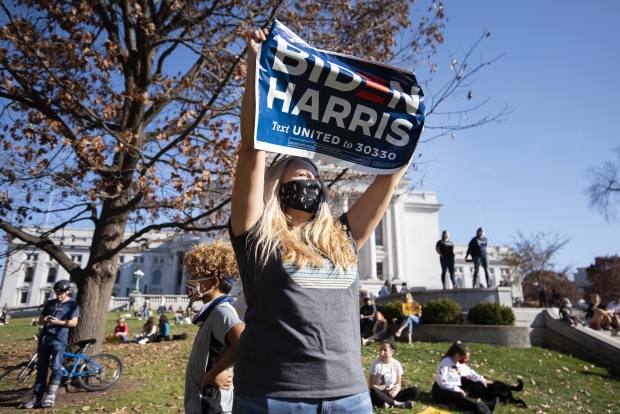 Martia Rinde of Madison holds up a sign after former Vice President Joe Biden was projected as the winner of the 2020 presidential election Saturday, Nov. 7, 2020, outside of the Wisconsin State Capitol. Angela Major/WPR

Wisconsin’s 10 presidential electors cast their votes for President-elect Joe Biden on Monday, taking one of the final state-level procedural steps in a tumultuous election year.

The 10 Democratic presidential electors met at the state Capitol Building at noon, as is required under state law, to cast their votes for Biden and Vice President-elect Kamala Harris.

The process, which is typically obscure and happens without much public interest, was under a spotlight this year following a flurry of lawsuits from President Donald Trump and his allies over election results.

Ben Wikler, chair of the Democratic Party of Wisconsin and one of the electors, lauded the ballots being cast for Biden as a sign that “democracy won” in 2020.

“Every American who doubted, today makes it real — your vote counted, your vote mattered, your vote was powerful beyond measure,” Wikler said. “Your vote changed the world.”

The electors’ votes came less than an hour after the Wisconsin Supreme Court ruled against a lawsuit from the president seeking to overturn the results of Wisconsin’s presidential election. Certified results, including the findings of  recounts in Dane and Milwaukee counties, show Biden defeated Trump by a margin of roughly 20,600 votes in the state.

Shortly after the electors’ ballots were cast, Gov. Tony Evers, another elector, made a quiet, informal statement of victory.

Wisconsin has one elector for each of its eight Congressional districts and two statewide electors. Electors for each political party with ballot status in Wisconsin are chosen in October by politicians and party officials.

The Democratic electors voting Monday were:

State law requires presidential electors to meet at noon on “the first Monday after the 2nd Wednesday in December” to cast their votes. After the electors’ ballots are cast and certificates are signed, Evers and Secretary of State Doug LaFollette will sign off and Wisconsin’s paperwork will be forwarded to the Vice President of the United States, federal archivists in Washington, DC, and the chief judge of the Western District of Wisconsin federal court.

Congress is scheduled to meet Jan. 6 to count all 50 states’ electoral votes. Those votes may be challenged by members of the U.S. House of Representatives or U.S. Senate, and some GOP members of the House say they plan to do so. However, the votes cannot be rejected unless a majority of both chambers vote to do so.

Biden’s inauguration is scheduled for Jan. 20.