How We’ve Handled the Tosa Protests

More than 75 protests and lots of misunderstandings. How city officials have responded.

By Wauwatosa Mayor Dennis McBride - Dec 5th, 2020 02:12 pm
Get a daily rundown of the top stories on Urban Milwaukee 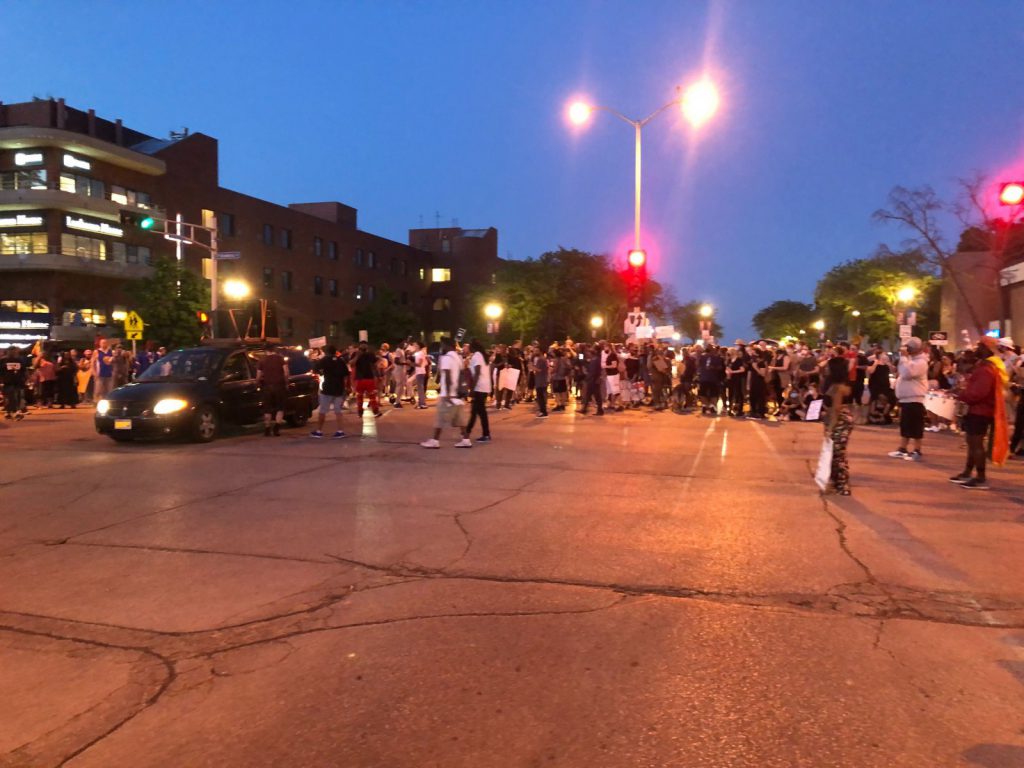 In my seven months as Mayor, the City of Wauwatosa has struggled through a pandemic, economic recession, and social unrest. During that time, people of varying political beliefs have engaged in protests. Some have spread misinformation about those protests and the City’s response. This has not served the Milwaukee community well.

On May 25, a Minneapolis police officer murdered George Floyd. On June 5, I issued a statement apologizing for Wauwatosa’s history of racism and expressing the City’s commitment to racial justice and equity. After the Floyd murder, Wauwatosa became the site of protests – about 75 so far – because Wauwatosa police officer Joseph Mensah killed three men of color while on duty.  Milwaukee County District Attorney John Chisholm declined to prosecute Mensah after shootings in 2015 and 2016. The third shooting occurred at Mayfair Mall in February 2020, before I took office.

On July 7, The People’s Revolution protesters forcibly closed the Cheesecake Factory at Mayfair. Some were arrested, and TPR tried to shut down the Wauwatosa Common Council meeting that night.

On July 14, the Common Council directed the Police Chief and City Administrator “to facilitate [Mensah’s] transition” from the Wauwatosa Police Department (WPD). The vote was 14-1; one alderwoman chose not to participate. I signed that resolution the next day. Protests continued for the next four months while we negotiated Mensah’s departure.

On August 7, TPR protested at Mensah’s home. One protester fired a shotgun. The District Attorney charged several people with felonies. Congressman Jim Sensenbrenner demanded that the City bring in federal agents to keep the peace and others criticized us for not responding to the ongoing protests more forcefully. I publicly rejected those demands, saying they would increase tensions, and defended the right to protest – lawfully – under the First Amendment to the U.S. Constitution.

On October 7, District Attorney Chisholm declined to charge Mensah in the February shooting, finding he had acted in self-defense. At the request of WPD and Governor Tony Evers, I issued a Declaration of Emergency under Wisconsin law. Evers sent in the National Guard to protect lives and property.

When we began preparing for Chisholm’s decision in July, we didn’t expect National Guard assistance. Our planning took on more urgency in August after Kenosha police shot a Black man. Local and outside protesters were confronted by white supremacists from out of state and when deaths, serious injuries, and $50 million in property damage occurred. The situation was only brought under control when a curfew was imposed and Governor Evers sent in the National Guard.

In the weeks before Chisholm’s October 7th announcement, WPD received credible threats of violence and vandalism, including burning down Mayfair Mall and warnings of outside agitation. In fact, during our five-night emergency period, outsiders did appear and tensions rose. Most of the protesters were peaceful, but WPD arrested a man carrying materials used for making Molotov cocktails, protesters threw bricks at police and pulled dumpsters into North Avenue and tried to set them on fire, and some business and apartment windows were smashed. A few protesters engaged in looting. On the second night, some of those arrested were taken to West Allis for booking. A standoff between armed protesters and counter-protesters began, and 25 National Guardsmen were deployed to keep the peace.

Some people disagree with the Emergency Declaration. But more people, of all political persuasions, have supported what we did. Beforehand, we had two options: “business as usual” or preparing for possible trouble. We don’t know what might have happened if we had not prepared; what we do know is that during the five-night period, unlike Kenosha, no one was killed, no one was seriously hurt, no serious property damage occurred – and the protests continued each day until curfew time.

On November 17, the Common Council approved a settlement under which Mensah resigned from WPD. Protesters, including some lawyers and state legislators who should know the law better, had been demanding that the Mayor, Common Council, and Wauwatosa Police & Fire Commission (PFC) fire Mensah and Police Chief Barry Weber without a hearing. But the Wisconsin Statutes give the PFC – not the Mayor or Common Council – total authority over the firing and discipline of police officers and chiefs and require due process before discipline is imposed. Those same lawyers and legislators are still misleading the public by saying the Mayor can fire the Chief. Again, only the PFC can do that; I only have authority to bring charges and would not do so without Common Council backing. Even then, any charge would have to reach the high threshold of “just cause,” which is unlikely under Wisconsin statutory and case law.

Legal constraints often frustrate people. But to comply with our oaths of office, elected officials must ensure the rights of the accused and avoid the financial liability the City would face if we acted otherwise.

In mid-November, a pro-Trump group announced it would rally at Mayfair on November 21. I immediately spoke to a WPD captain. He asked the organizers not to proceed with this “MAGA” rally, which seemed to be a provocation near Mensah’s most recent shooting.  The organizers refused. WPD then made it clear that if the rally proceeded, it would not be allowed on Mayfair property, which is privately owned, and would have to follow the same rules as other protests.

Some people demanded that the MAGA rally not be allowed. But as stated in ACLU guidance, on city streets and sidewalks, people of all beliefs may exercise their rights of free speech and assembly if they don’t obstruct traffic and otherwise obey the law. The rally proceeded. Some participants, like participants at earlier TPR protests, carried guns. At a press conference, I said people should not come to political rallies with guns and I wished the organizers had called off the rally, which took place the day after a mass shooting at Mayfair, to recognize that our community is suffering.

I’ve spent my entire life working for racial justice. I despise white supremacists, especially the so-called “Proud Boys” who flashed guns at the rally. Their hate speech is contemptible. There is no moral equivalence between a hate group and groups that advocate for the rights of all people. Nevertheless, under the U.S. Constitution, the government — local, state, or national — cannot pick and choose what speech deserves more protection based on the content of the speech. (See Reed v. Town of Gilbert, 576 U.S. 155 (2015).)  In National Socialist Party of America v. Skokie, 432 U.S. 43 (1977), the Supreme Court held that under the First Amendment, even the Nazi Party – which was represented by the ACLU – had to be allowed to march through Skokie, Illinois, which had many Jewish residents. As Justice Oliver Wendell Holmes wrote in U.S. v. Schwimmer, 279 U.S. 644 (1929), “if there is any principle of the Constitution that more imperatively calls for attachment than any other, it is the principle of free thought — not free thought for those who agree with us but freedom for the thought that we hate.”

Some asked of the MAGA rally: Why no curfew? Why no National Guard? A curfew was not needed at 11:00 a.m. For five of the 75 BLM protests this year, a night-time curfew was imposed only after the District Attorney decided not to charge Mensah and the City received prior threats of arson. No curfew was imposed on 70 other nights. Though the MAGA rally was of great concern to the City, there were no prior threats of arson and nearby police departments stood ready to help WPD. By itself, people carrying guns in Wisconsin, an “open carry” state, is not something that would legally merit calling in the National Guard. Otherwise, the Guard would have been present at every protest this year.

On November 27 and 28, TPR rallied on the same site as the MAGA rally, joined by another group the second day. The WPD was present at all three rallies. At the MAGA rally, one person was arrested; at the TPR rallies, no one was arrested. This underscored the point made by the City all year: if people act lawfully and peacefully, their rallies and protests will be unimpeded.

The George Floyd murder, Presidential election, and pandemic have heightened existing tensions in the Milwaukee community. Undeterred, Wauwatosa has purchased body cameras for WPD, banned chokeholds, commissioned an outside firm to review WPD’s operations, and provided implicit bias training for police, other City employees, and elected officials. We’re working on many other reforms, not just in WPD but in all City departments.

Wauwatosa is moving forward. We will not be deterred by any group that seeks to divide us. A crisis is a challenge, but also an opportunity. Guided by law and a moral compass, we will never stop working to make our community a better and more welcoming place.