Response team connects people to treatment after a non-fatal overdose.

By Edgar Mendez, Milwaukee Neighborhood News Service - Nov 20th, 2020 11:13 am
Get a daily rundown of the top stories on Urban Milwaukee 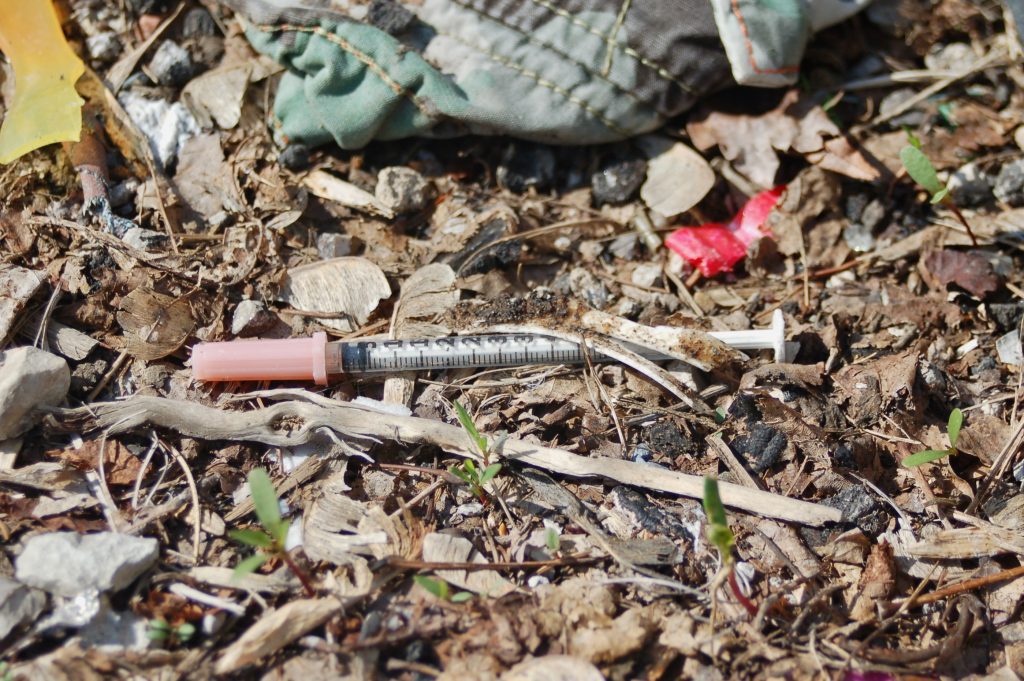 Milwaukee County has likely already surpassed its prior all-time high of 418 drug overdose deaths in 2019, and reaching 500 cases this year seems like a foregone conclusion. File photo by Edgar Mendez/NNS.

Molinski, a peer support specialist for West Allis Community Medical Services, arrives each weekday at a fire station on Milwaukee’s South Side and reviews a list of individuals who survived drug overdoses the day before or over the weekend.

Then she and peer specialists from Project WisHope and CleanSlate Milwaukee, along with personnel from the Milwaukee Fire Department, hit the streets with the goal of connecting those individuals to treatment and recovery services that could save their lives.

“We’re knocking on doors, seeing how many people open it and want help from us,” Molinski said.

MORI, which launched in June 2019 and is funded through a grant from the National Association of County and City Health Officials, deploys a rapid-response team to homes or hospitals in hopes that people who overdosed are scared enough to try to change.

“The reality is they need more than just being brought back,” Molinski said. “We are there to provide the best options based on their circumstances, and if they are ready for help, we give them a direct ride to treatment.”

Those who are not ready for treatment are connected with other resources, including needle exchange programs and HIV testing. The overall goals of the program are to decrease overdose fatalities and emergency department usage and to increase access to evidence-based treatment.

Families not left behind

In addition to services for individuals who survive drug overdoses, a grant allows the MORI program to also provide services for the families of those who died, according to Courtney Geiger, a grant specialist for the Milwaukee Health Department. A certified social worker now works full time at the Medical Examiner’s Office, reviewing cases and providing resources to victims’ families.

Leaders of the MORI program and other initiatives to reduce drug overdose deaths are fighting a growing battle. According to data provided by Karen Domagalski, operations manager for the Milwaukee County Medical Examiner’s Office, there were 408 confirmed drug overdose deaths from Jan. 1 to Oct. 17, 2020, with another 67 suspected cases pending toxicology reports. The county has likely already surpassed its all-time high of 418 drug overdose deaths in 2019, and reaching 500 cases this year seems like a foregone conclusion.

“The projections of deaths this year are pretty dismal,” said Ald. Michael Murphy, chairman of the City-County Heroin, Opioid, and Cocaine Task Force. He ties this year’s increase in fatal overdoses to the COVID-19 pandemic.

“I’ve been hearing a lot about depression and lack of mental health resources being made available to people due to COVID, which compounds the issue,” he said.

Although there is no concrete data link between COVID-19 and the rise of overdose deaths this year in Milwaukee County, the pandemic has negatively affected many individuals’ mental health and increased isolation — both recipes for relapse, Molinski said.

A closer look at the grim numbers

The number of drug overdose deaths in the county has grown substantially over the past decade, from 149 in 2010 to 401 in 2017 and 418 last year, according to an unpublished overdose data brief provided by the Milwaukee Health Department.

Data from the Medical Examiner’s Office shows that of the 408 confirmed victims so far this year, 69 percent were men. The majority were white (58 percent), while 28 percent of the victims were Black, and 9.5 percent Hispanic. In addition, seven Native Americans died of overdoses; eight  individuals classified as multiracial and two Asian/Pacific Islanders also died of overdoses.

Fentanyl, a synthetic opioid that advocates say is commonly used as a cutting agent for cocaine and other drugs, was a factor in nearly three-fourths of the deaths. Also more common were cases where more than one drug in combination was listed as the cause of death, according to the data.

‘You had an overdose that almost killed you’

The county, along with the Medical College of Wisconsin and Froedtert Hospital and other partners, is working on another initiative to reduce drug overdose deaths, said Michael Lappen, administrator of the Milwaukee County Behavioral Health Department and vice chairman of the City-County Heroin, Opioid, and Cocaine Task Force.

That effort, supported by a federal State Opioid Response Grant, involves a similar rapid effort to reach those who were brought to Froedtert after suffering a drug overdose.

“It’s an aggressive attempt to try and tell people, ‘You had an overdose that almost killed you,’” Lappen said. “‘Please go out and get some help.’”

The county, in partnership with the House of Correction in Franklin and others,  also is supporting a program aimed at reducing overdose deaths among those who’ve been incarcerated. That program involves participation in treatment programs, voluntary injections of vivitrol, which block the effects of opioids, and follow-up services upon release, Lappen said.

As she travels in a Ford Taurus, rebranded as a community paramedic vehicle, Molinski tries not to let the grim reality of the situation in Milwaukee County affect her work.

“If we stop and look at the data alone, of course, we would be overwhelmed,” she said.

But those numbers won’t capture the many successes they have experienced since June, she said. Some days she’s able to persuade three people to get treatment, she said. That’s good enough for Molinski, who describes her job as the best in the world.

“What keeps us going is knowing how many people have gotten help that otherwise would have died.”

One thought on “Overdose Responders Struggle Against Rising Deaths”