The Republican Push For Autocracy 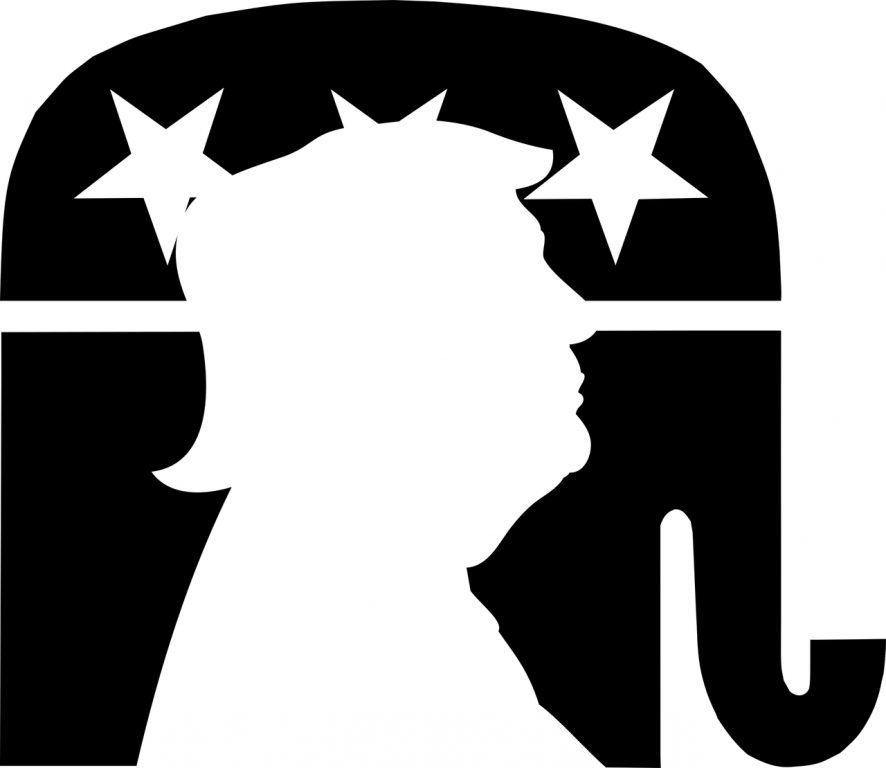 A recent briefing paper helps quantify the shift by the Republican Party away from democratic norms to ones embraced by authoritarian parties. The paper comes from the V-Dem Institute, based at the University of Gothenberg in Sweden. It is based on the institute’s large database of policy positions and organizational structures of political parties around the globe.

The illiberalism index is built on the answers to questions such as whether leaders of this party:

The next chart plots illiberalism of the two main American political parties since the 1970 midterm election, Democratic in blue, Republican in red. The lower the value, the more a party’s rhetoric reflect the values of democracy. National elections are shown as circles. 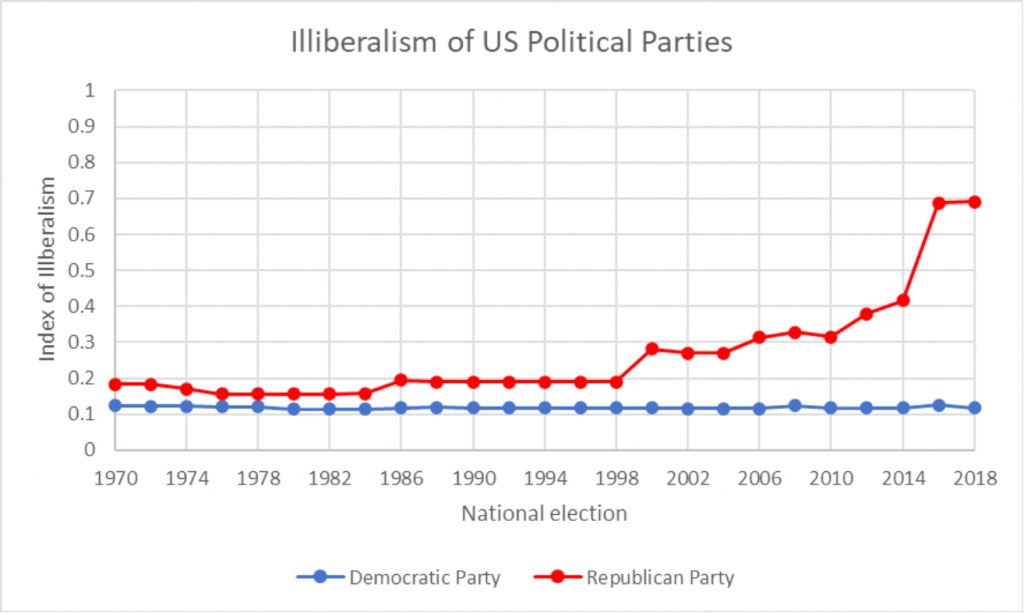 Illiberalism of US Political Parties

The impact of Donald Trump is reflected in the Republican ratings for the 2016 and 2018 elections, but this drift towards autocracy started earlier, around the start of the new century. It is reflected in the gerrymandering following the 2010 census and the party’s moves to make registering and voting more difficult on the theory that the people discouraged would likely vote Democrat. The V-Dem Institute found that the Republican Party had become “far more illiberal than almost all other governing parties in democracies,” while “the Democratic Party was rated slightly less illiberal than the typical party in democracies.”

The next chart compares the trajectory of the Republican Party to four political parties that have become far more authoritarian in recent years–Law and Justice in Poland, the Indian People’s Party (BJP), Fidesz in Hungary, and AKP in Turkey. As all four became more autocratic, so did the nations they dominate. It is perhaps not surprising that several of their leaders endorsed Trump in the recent election. 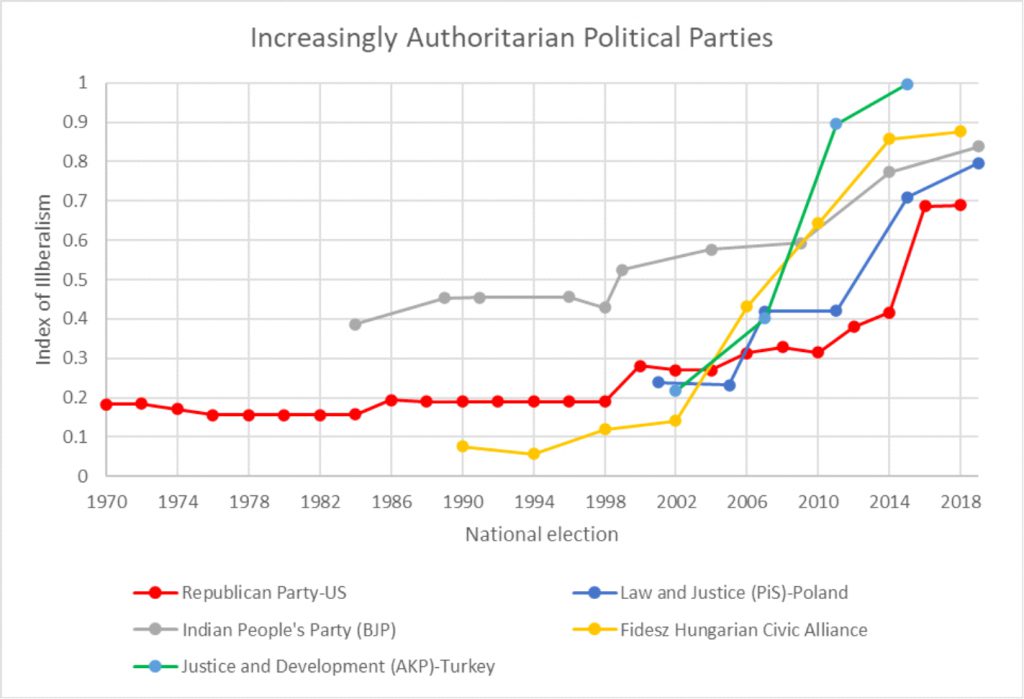 One mark of autocrats is that they do not like elections, especially elections they could lose. Trump and the modern Republican Party certainly fit that mold, as illustrated by his refusal to acknowledge the results of the November election and work with president-elect Biden to assure a smooth transition.

Rather than encourage Trump to respect the vote count, most Republican politicians, including those in Wisconsin, either defended Trump’s efforts to reverse the election or ignored it. For example, Sen. Ron Johnson of Wisconsin recently told reporters “there’s nothing to congratulate [Biden] about.”

State Rep. Joe Sanfelippo of New Berlin went further in suggesting that the voters be overruled. According to WISN, he said “You either have to toss this election out and have a whole new election, or we have our delegates to the Electoral College vote for the person they think legitimately should have won.” WISN quotes him as saying, “Democrats have created a cloud of suspicion over this election because they refuse to follow state election laws,” without, apparently, specifying the laws he claims that Democrats refuse to follow.

However, perhaps the most audacious attempt to reverse the vote came in the form of a lawsuit called Langenhorst v. Pecore. It asked a federal judge to throw out all the votes from Milwaukee, Dane, and Menomonee counties. If successful, this would have given Trump a huge majority of the votes from Wisconsin. It would also have removed any pretense that the United States is a democracy.

The plaintiffs’ brief in Langenhorst contains considerable discussion of voter fraud in general, including references to articles in right-wing media, such as the New York Post and Fox News. It does not, so far as I can tell, include any evidence of specific fraud in this election. It passes on several claims by people who asserted that they received absentee ballots they did not request, a violation of the rules if true, but not fraud. The closest the brief comes to specificity is a list of three people who submitted absentee ballots, but then died before election day.

Perhaps realizing that none of this would be compelling to the court, the brief then promises an “expert report” that identifies “persons who cast votes illegally by casting multiple ballots, were deceased, had moved … along with evidence of illegal ballot stuffing, ballot harvesting, and other illegal voting.” In other words, the authors presently have no evidence of illegal voting, but hoped they could find it.

A hearing before Judge William Griesbach was scheduled for the morning of November 16. But on November 16, all three plaintiffs submitted notices of voluntary dismissal. And thus Langenhorst v. Pecore suffered the fate of the many other lawsuits aimed at reversing the vote and giving Trump a second term.

Get a daily rundown of the top stories on Urban Milwaukee
Was the lawsuit a Trump creation? Neither he nor his campaign are listed among the plaintiffs. Instead, the plaintiffs are three individuals from northeastern Wisconsin. That choice seems to reflect an attempt at judge shopping. The home counties of the plaintiffs, as well as the inclusion of Menomonee County as a defendant has the effect of directing the case to the Green Bay Division of the United States District Court for the Eastern Division of Wisconsin. Currently, William Griesbach is the only judge in the Green Bay Division. Nominated by President George W. Bush, Judge Griesbach has a reputation as a conservative. For example, when a three-judge panel voted 2-1 against the Wisconsin gerrymander, he was the dissenter.

One piece of evidence that this case was actually brought at the request of Trump is that James Bopp is listed as the lead attorney. In October of last year Bopp, a long-time right wing operative, signed onto the Trump campaign. Rather than Trump or his campaign, this brief affiliates two organizations with Bopp and his firm: True the Vote and Validate the Vote Project.

When all is said and done, this aborted lawsuit has all the hallmarks of a Trump project, particularly the underlying assumption that only fraud could explain his defeat.

The proposal in the brief—that presidential election results from Milwaukee, Dane, and Menomonee counties should be excluded from the electoral count—would effectively end the United State as a democracy. To the extent that Trump was affiliated with this effort, it should end the question of whether he merely plays at being a dictator. It suggests he seriously wants to be a dictator.

One thought on “Data Wonk: The Republican Push For Autocracy”