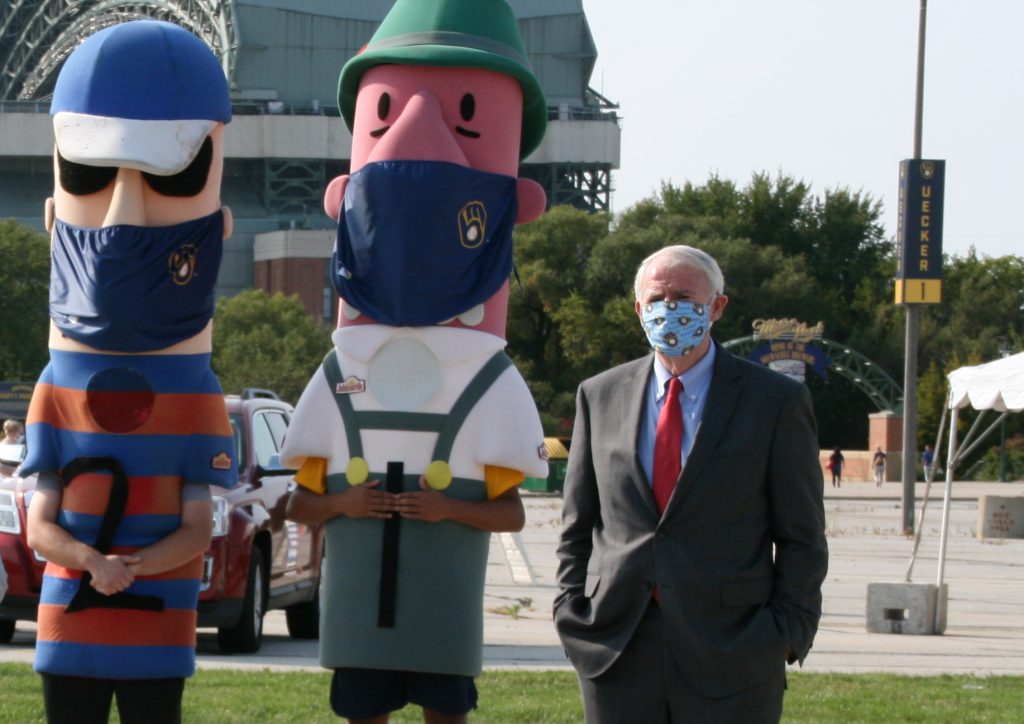 “What a long strange trip it’s been,” Mayor Tom Barrett declared at the opening of his remarks Wednesday afternoon before the Milwaukee Press Club.

Barrett, as he often does, opened by quoting a musical artist from his youth, in this case the Grateful Dead. But unlike his usual stump speeches that include a narrative about fighting back and a list of accomplishments, he spent much of the hour discussing the challenges the city is facing.

Some challenges or losses are obvious and didn’t take up much time: the loss of a Democratic National Convention boost or a potential Milwaukee Bucks championship. But others have bubbled up subtly in the background, even before the pandemic took hold – notably a surging homicide rate and looming financial challenges for the city – and were discussed at length.

Wisconsin on Tuesday reported more new COVID-19 cases than every state but Texas, and has a surging per-capita spread that places it among the worst in the nation.

Barrett said Wisconsin was doing well until a Wisconsin Supreme Court ruling in May voided much of Governor Tony Evers‘ authority. “I really do view it as a jukebox for the Republican Party. Republican leaders put a quarter in and the Supreme Court plays the song Republicans want them to play,” he said.

His criticism wasn’t aimed solely at Republicans at the state level. Barrett said President Donald Trump failed to use his soapbox to elicit more unified behavior in the wake of the COVID-19 challenges, which has eroded a sense of community.

“You might think you’re Superman or Superwoman. Or that the government does too much or too little,” said Barrett. “But geez, why can’t we just come together and wear the damn masks? To me it’s a patriotic act.”

“We need our President to help guide us, and we literally haven’t seen that,” said Barrett.

The city continues to go it alone on a local health order. “Our approach has never been to be punitive,” said Barrett of the business-focused restrictions. But he reiterated a claim from last week that enforcement was moving from education to citations. “You either understand there is a pandemic now or you don’t.”

In response to a question, he didn’t rule out further restrictions as a result of rolling back to early versions of the city’s order. “I can’t say point-blank we are not going to go further back,” said Barrett. “I hate seeing these numbers.” The city and county both have higher levels of new cases and hospitalizations than at any point in the pandemic.

As he has done for weeks, the mayor also pushed for a new federal relief package. The city’s CARES Act funding, which goes to fund the health department, testing sites, safety grants and a variety of other programs, expires at the end of 2020. Barrett said the city would be unable to operate the Miller Park and other COVID-19 testing sites without the money.

Even before COVID-19 rocked government finances across the country, Milwaukee was facing fiscal challenges. By 2023 the city, according to actuarial estimates, will need to set aside an additional $60 million to $90 million annually to fund its pension system. Eighty percent of those costs are estimated to go to cover public safety employees. But even before the city gets to 2023, it is facing challenges with its 2021 budget.

The city’s contract with the police union includes automatic raises and covering fringe benefit costs expected to grow in 2021, resulting in a budget that would currently cut police funding by $400,000 compared to 2020, but lose 120 officer positions over the course of the year.

The issue is growing more acute because state shared revenue, after adjusting for inflation, is down approximately $100 million per year since 2003 and the city, by state law, cannot raise the property tax rate beyond the value of new construction. Other regulations affect how the city must bargain with the police and fire unions.

“We do not have the flexibility to control many of the costs in our public safety organizations,” said Barrett. “The fiscal relationship between local and state government is broken. That’s a major issue the Legislature has to address when they reconvene in 2021.”

“Mathematically it simply doesn’t work,” he said. “I’ve said it to [the Legislature] for years, ‘you’re going to see fewer police,’ and they don’t believe me. It’s not a philosophical argument, it’s a mathematical one.”

The mayor said the city must also reckon with racial justice alongside the health and economic hardships of the pandemic.

He said he still has concerns about what happened on the Milwaukee-Shorewood border on May 31st and at 6th and McKinley on June 2nd. The city faces legal claims from both incidents.

“I made it very, very clear that I don’t think rubber bullets should be used in the situations they were used in, nor the tear gas,” said Barrett. “I didn’t like what I saw and I let the then-chief [Alfonso Morales] know it.”

The city also faces a legal challenge from Morales. He was demoted by the Fire & Police Commission in August, retired and now has a legal claim against the city. “I am not happy with a lot of what has occurred at the Fire & Police Commission,” said Barrett, before declining to discuss specifics of Morales. He did praise outgoing executive director Griselda Aldrete. The executive director spent less than a year on the job before opting out of the necessary reappointment process following Barrett’s April re-election and facing an uncertain Common Council vote.

Barrett said the new police chief would need to understand the city’s financial reality and the practical challenges the city faces.

A looming issue could make things more challenging. A federal requirement to proactively report undocumented residents in custody to Immigration and Customs Enforcement would prevent the city from accepting an already-awarded COPS grant that would fund a 30-officer recruiting class in 2020. An FPC-imposed standard operating procedure prevents warrant-less cooperation on the issue and Milwaukee Police Department officials are requesting the Department of Justice waive the requirement. But even if the federal government does, the council might not accept the grant. Barrett doesn’t want that to happen.

“Saying no to that $9 million does not put a single penny into prevention programs, into health programs,” he said. “It simply makes it harder for us to respond to calls from the constituents we represent.” The grant would pay for the officers, including fringe benefits, for three years to work on combatting violent crime.