One in Walker's Point, one in Riverwest, both with a civil rights theme. 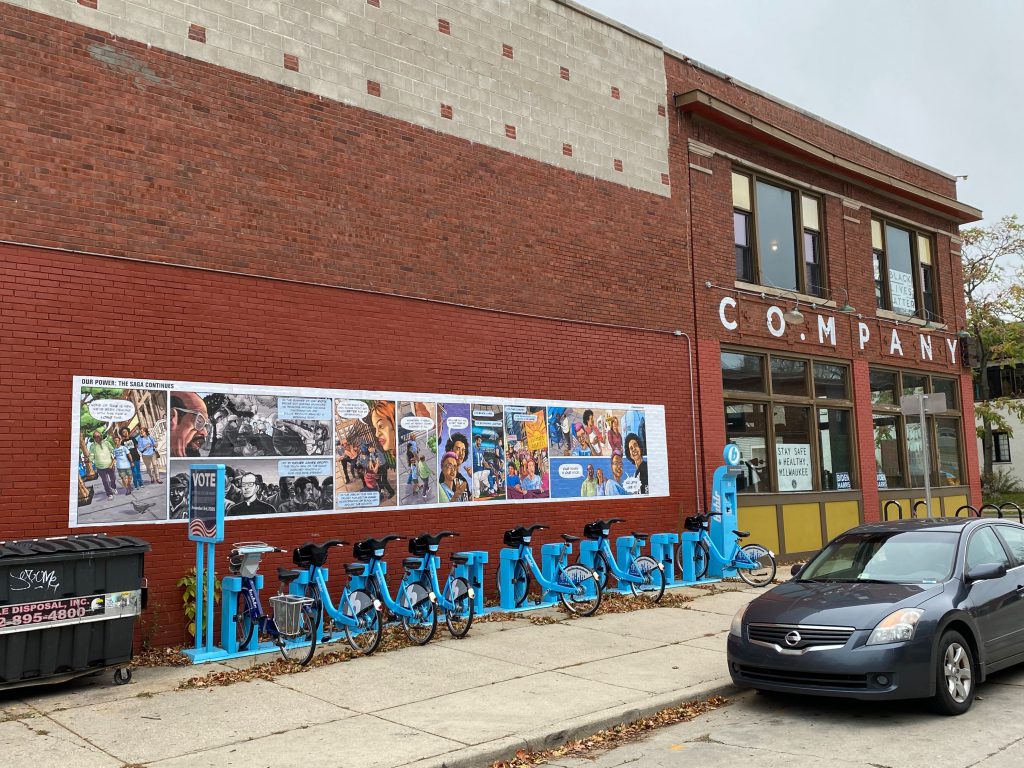 Mural on the side of Company Brewing. Photo by Graham Kilmer.

Organizers with March for Our Lives have installed two massive comic murals in Walker’s Point and Riverwest encouraging Milwaukeeans to vote in the coming election. The large wheat paste murals, one 15-by-25 feet and the other five-by-30 feet, are pasted on the side of Grove Gallery at 832 S. 5th St. and Company Brewing at 735 E. Center St. The murals will stay up for as long as the wheat paste will hold, ideally until election day, November 3.

In the comic strip, a young Black woman listens to an elder talk about the Milwaukee housing marches in 1967 and mass incarceration born from the war on drugs and its lingering effect on the Black community. Not accepting these effects as normal, the young woman signs a ballot and joins a line of other young people who put their ballots in a voting box. In the final panel, the elder says, “Our power is in our voice.” The young woman replies, “So let’s use it.”

March for Our Lives is a youth-led gun violence prevention group born out of the Florida shooting. Dawn Sinko, who oversaw production of the murals working from Los Angeles, said the goal was to inspire morale in activists. “The idea of this piece is that it’s not hopeless,” said Sinko. “It’s obviously taken a lot longer than people would have liked to make change, but you have to keep standing up. It’s a positive thing you can achieve when you do that.”

The group had planned to hold live events for voter registration during this year but had to switch to a digital campaign because of the coronavirus pandemic. Milwaukee was the last stop in a tour of art installations that visited cities like Denver, Phoenix, Philadelphia and Houston. The comic was designed by Jamal Igle, who has designed comic books for Marvel and DC.

The mural was printed in 15-foot strips at West Allis Blue, a print shop in West Allis. Printing and installing the long strips only took a couple of days. Mark Naber, the vice president of West Allis Blue, said that the low-cost materials for the mural suited the project’s quick deadline and short duration. The pigment aqueous ink is waterproof and resists fading from the sun, and the wheat paste will provide a barrier between the paper and the elements.

Installation was done by a team of Milwaukee locals assembled by a March for Our Lives posting on Craigslist. Steve Roche, a community organizer, said that taking part in the installation was empowering and it allowed him to build new connections with other activism-focused people. “These are new friends I have from every event. We carry these strengths and relationships beyond installations we did,” said Roche. “These are relationships where we can lean on each other and tap each other for support or help with different things in the future.”

Roche said that an eight-by-12 foot comic mural will be installed at a later date. In addition, some 500 11-by-17 inch posters have been pasted onto street poles and walls around the city. 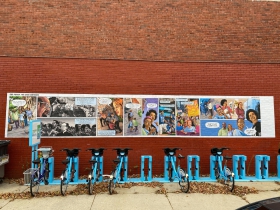 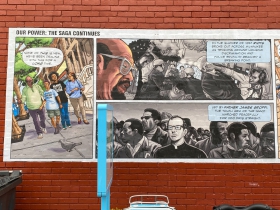 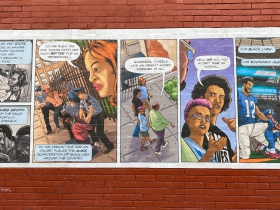 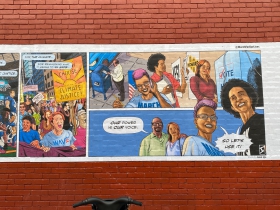 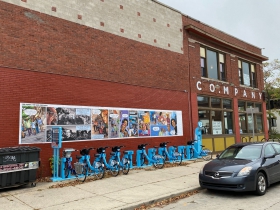 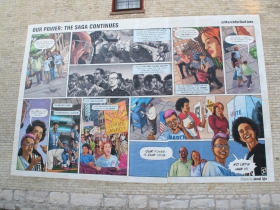 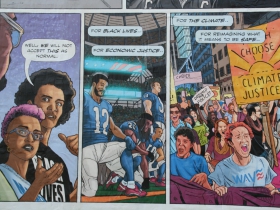 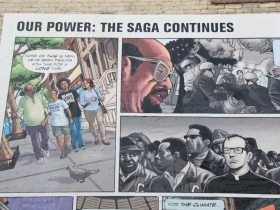 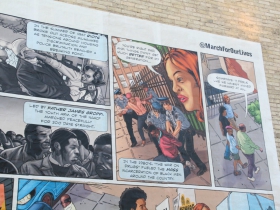 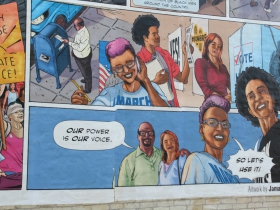 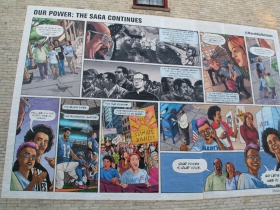