By Tamarine Cornelius, Wisconsin Budget Project - Oct 7th, 2020 12:27 pm
Get a daily rundown of the top stories on Urban Milwaukee

The disclosure that President Trump pays next to nothing in income taxes has highlighted the fact that the federal tax system is stuffed full of loopholes only available to the ultra-wealthy. But you don’t have to look to the federal system to find a tax code tilted in favor of the rich and powerful. Wisconsin’s system is also loaded up with a collection of special-interest tax breaks that siphons revenue away from where it is needed most, and instead directs it towards a small number of wealthy, well-connected individuals and big corporations.

Wisconsin’s tax code is a major driver of economic inequality. The richest residents of Wisconsin pay the smallest share of their income in taxes of any income group, leaving Wisconsin residents with low and moderate incomes to make up the difference. Taxpayers in the top 1% pay just 7.7% of their income in state and local income taxes, compared to 10.1% paid by taxpayers in the bottom 20 percent. 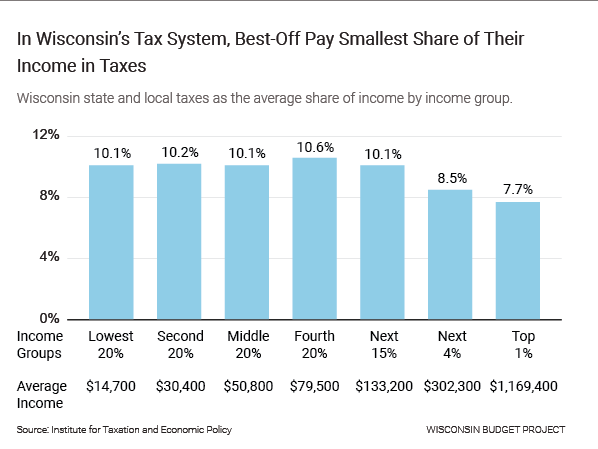 In Wisconsin’s tax system, best-off pay smallest share of their income in taxes.

Wisconsin tax breaks that allow some wealthy and powerful people to pay less than their fair share of taxes include:

In Wisconsin, as at the federal level, lawmakers have written the tax code so as to allow the wealthy and powerful to sidestep paying the taxes that fund government services, including schools, and modern transportation networks. These loopholes drive up taxes for people who live paycheck to paycheck, and also help starve communities of the revenue they need to provide critical public services.