$1.2 billion budget down slightly, with less for capital spending, parks and Sheriff's office. 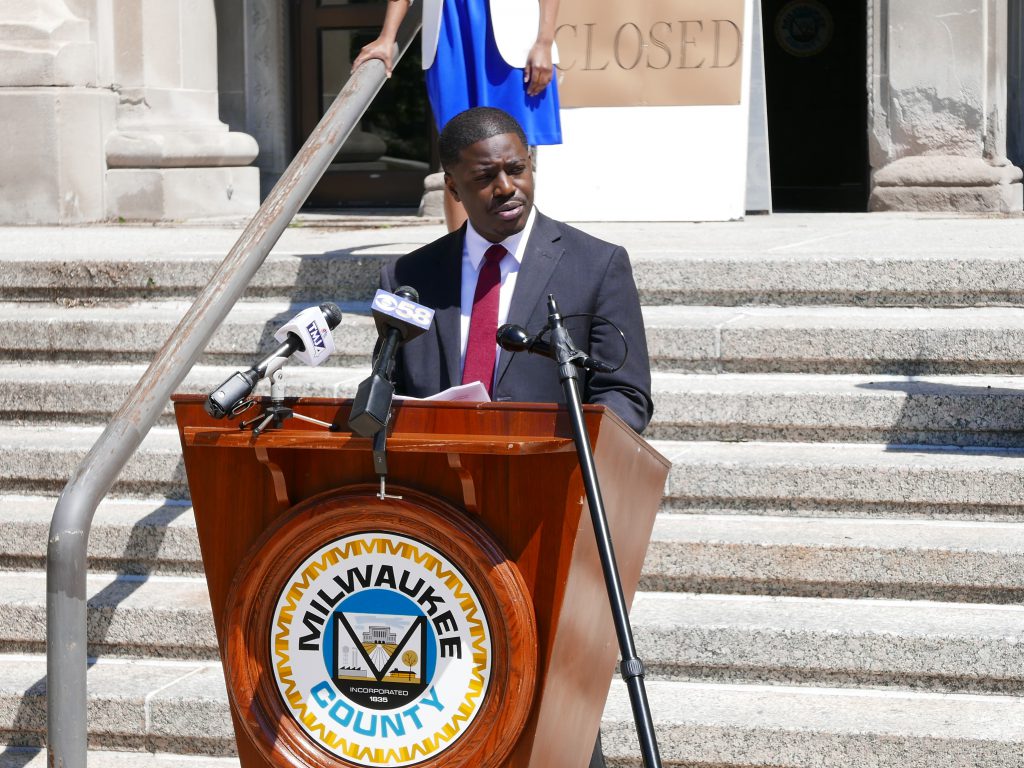 The budget shows a number of ways the county has been affected by the ongoing COVID-19 pandemic and the economic crisis. But it also shows the ways that Crowley’s administration is building its goals for racial equity into its annual budget.

In 2019, Milwaukee County declared racism a public health crisis, but the county board and County Executive Chris Abele offered few specifics on how to address this. Crowley’s administration has now developed a strategic plan for the county to reach its goal of becoming the healthiest county in Wisconsin through racial equity.

“MKE County acknowledges that years of intentional, institutional and systemic racism have worked to the advantage of white residents and to the disadvantage of people of color,” Crowley said when he presented his budget to the Board of Supervisors “We also acknowledge that we have the power to make change.”

The budget, which is a blueprint for the county government in 2021, aims to connect the county’s broader goals for racial equity with line items in the budget. County departments analyzed their 2021 budgets with a racial equity lens that helps them “critically assess the impacts of budget decisions on communities of color, focusing primarily on the role County policies, processes, and power structures play in creating systemic inequities,” according to the budget.

Milwaukee County has had a structural deficit for more than a decade. And like so many previous budgets, this one by Crowley’s administration balanced the budget for 2021 with some cuts and an increase in the property tax levy.

A major piece of the county’s financial woes stems from the continually rising cost to operate the government due to inflation and the declining state revenue it receives. If state aids had kept up with inflation over the last decade, the county would have an additional $44 million in state revenue in 2021. Meanwhile, the amount of revenue county taxpayers send to the state (through sales and income taxes) over that period has increased by nearly 30 percent.

Early in the budget process, the county’s Office of Performance Strategy and Budget projected a potential $42 million budget gap for 2021. The county already has an estimated annual structural deficit of $16 million. And this year, it was compounded by lost revenues caused by the pandemic.

In September, the Milwaukee County Comptroller projected these losses due to the pandemic: $10 million in sales taxes, $3 million in property taxes, $2.2 million in investment earnings, $1.6 million in lost revenue from the Potawatomi Hotel & Casino. And the Parks Department was projected to come in $6.5 million below budget due to less fees and other revenue generated and the House of Correction coming in $3.8 million below budget (due to the pandemic it cannot accept inmates from other jurisdictions, which was a source of revenue).

The county has long sought the ability to increase the local sales tax. This would require legislation at the state level, though, and the Republicans who control the Legislature have shown no sign of letting it happen. And because of the pandemic, the county built its 2021 budget with a $7.3 million decrease in sales tax revenue.

Even during a non-pandemic year, the county is challenged by rising costs and declining or stagnant revenue and aid from the state. With rising costs, the county is faced with an annual budget gap that arises simply from attempting to run the county as it currently is. This is why for the past decade the county has built an ever larger backlog of capital projects and maintenance it cannot afford to finance.

Part of the closing the gap this year was a reduction in spending on capital maintenance and projects. The county will only cash finance $16.9 million of a total of $80.3 million in capital projects this year, with the rest of money borrowed, adding $800,000 to the county’s long-term debt of $117.1 million.

The major projects Crowley highlighted in his budget include: a $10 million taxiway extension at Milwaukee Mitchell International Airport; $7 million for the 2021 Bus Replacement Program; $6.2 million to reconstruct County Highway Y or Layton Avenue from 27th Street to 43rd Street; $4.7 million for relocation of the Youth Services Administration and Tenant Improvement; $4 million for the new African Elephant Exhibit at the Milwaukee County Zoo; $3.3 million for the second phase of the development of the new Forensic Science Center; and $1.6 million for the Underwood Creek Parkway Replacement.

Despite budget deficits and the fiscal challenges posed by the pandemic. Crowley’s budget has mid-year salary increases built in of 1 percent for county employees making less than $100,000 and .5% for those making more than $100,000.

Also, keeping in line with the county’s goal to improve racial equity, Crowley’s budget has $376,000 earmarked for salaries with the goal of improving racial and gender pay equity within the county.

Under Crowley’s budget, the Milwaukee County Sheriff’s Office would see a $1.3 million or 2.7% reduction in 2021 from 2020. A significant chunk of this reduction comes from eliminating six full time positions within the department. This reduces personnel costs for the department by nearly three quarters of a million dollars.

The budget also includes $1.3 million in funding for salary increases for members of the Milwaukee County Sheriff’s Association. The Sheriff’s office is currently negotiating a labor contract with the union, and that funding would be made available pending approval of the contract by the Board of Supervisors.

The Sheriff’s office is also reorganizing, moving a number of bureaus and functions under the umbrella of the Investigative Services Bureau.

The Parks Department took a hit this year, as it has for many years. The budget for the department was reduced by $1.2 million in 2021, which is approximately a 3% budget reduction.

The budget, however, does include $40,000 for a workforce development program called “UpLift” which is intended to increase diversity in the Parks department. It was paused in 2020 when the pandemic hit and hiring was frozen.

Parks does anticipate generating some new revenue this year by raising fees at golf courses and boat launches, and slip rentals at the marina. These fee increases are projected to produce approximately $225,000 in additional revenue.

The transit system’s improved budget situation is thanks to the large infusion of capital it received from the CARES Act after the start of the pandemic. According to Crowley’s budget, “If not for [CARES Act transit Aid] being made available to Milwaukee County for transit, MCTS originally projected a budget gap of over $12.1 million for 2021 due to total expenditures increasing by $2.5 million (1.6%) and decreases in revenue and tax levy in the amounts of $5.3 million and $4.9 million, respectively.”

Still, this budget was developed with the assumption that ridership would rise back above the “record low levels” experienced in 2020. If it doesn’t, and the CARES Act funds run out, “mid-year corrections may have to be pursued.”

Department of Health and Human Services

The Department of Health and Human Services (DHHS) saw a reduction in Crowley’s proposed 2021 budget.

According to Crowley’s proposed budget, these expenditure decreases were made possible by subsuming two county departments — the Department on Aging and the Department of Veterans Services — within DHHS. This merger is an expansion of the county’s “No Wrong Door” policy that allows people accessing one DHHS service to connect with all other services the department offers.

“We want to make sure that anybody, whether you’re aging, whether you’re a veteran or anyone else, when you touch Milwaukee County Services that you get seamless access to all the other services,” Crowley said.

The move was criticized, however, by the chairman of the Commission on Aging, who charged that the plan to merge the departments lacked transparency and input from the senior community.

As the county continues to decrease the number of young people it places at the state-run youth prisons — Lincoln Hills School for Boys and Copper Lake School for Girls — the county is seeing its expenses decrease. Crowley’s budget has $1 million budgeted from these savings that would go towards local community-based services for youth. These services include credible messengers, an Achievement Center and youth engagement programs.