With one week to go before the state’s current statewide mask order expires, Gov. Tony Evers issued a new order Tuesday, along with a new public health emergency order as COVID-19 outbreaks persist on college campuses.

“We continue to learn more about this virus, but what we do know is that we are facing a new and dangerous phase of the COVID-19 pandemic here in Wisconsin,” Evers stated, announcing the two new orders. “We are seeing an alarming increase in cases across our state, especially on campus. We need folks to start taking this seriously, and young people especially — please stay home as much as you are able, skip heading to the bars, and wear a mask whenever you go out. We need your help to stop the spread of this virus, and we all have to do this together.”

The new mask order requires state residents age 5 or older to wear face coverings indoors or in an enclosed space with anyone who is not part of their household.

The new health emergency order, Executive Order #90, and the new face covering order both take effect immediately, the governor’s office stated. They expire after 60 days “or with a subsequent superseding order,” according to the announcement.

Executive Order #82 took effect Aug. 1 and remains in effect, but it expires next week at the end of 60 days. That order was the vehicle for the current mandatory mask order, which expires next week as well. The governor’s office stated that the original mandate reduced the number of new COVID-19 cases, but the reopening of college campuses has produced a new surge.

The announcement Tuesday cited “unprecedented, near-exponential growth of the COVID-19 pandemic.” The number of new cases for the day was 678 on Aug. 31. On Monday, Sept. 21, there were 1,792 new cases — 2.6 times the number three weeks earlier.

People in the 18-24 age group have tested positive at five times the rate of any other age group, which the governor’s office statement said “appears to be driven by in-person social gatherings.” Eight Wisconsin cities were among the top 20 in the U.S. with the fastest-rising number of confirmed COVID-19 cases, according to the governor’s office, and six of the eight have University of Wisconsin System campuses.

Even with the surge in that age group, however, “it is important to remember that this increase in cases is not confined to college campuses,” stated Department of Health Services Secretary-designee Andrea Palm. Students traveling between high-infection-rate communities and their hometowns risk spreading the virus in other parts of the state.

“That is why it is imperative we take action to curb transmission now — to protect residents of Wisconsin in every corner of the state,” Palm stated.

“Wisconsin’s lawless governor continues to rule by fiat and it must end,” said Assembly Speaker Robin Vos in a statement Tuesday. “This latest order is obviously illegal. Wisconsin Statutes clearly state the powers given to the executive branch during a public health emergency are limited. There is already a court challenge and undoubtedly, there will be more. No one branch of government can rule outside the letter of the law and go unchecked, even during a pandemic.”

Rep. Scott Allen (R-Waukesha) declared that “much of the growth is in positive tests among college students who have not sought treatment for a COVID-related ailment, but are being tested far more frequently than the general population. COVID-19 cases are stabilizing or declining otherwise.”

That’s not what the DHS data shows, said Dr. Patrick Remington, professor emeritus in the Department of Population Health Sciences at the University of Wisconsin School of Medicine and Public Health.

“Yes, the rate of infection among 18-to-24-year-olds has skyrocketed,” Remington told the Wisconsin Examiner. “The incidence of COVID-19 is increasing in every age group in Wisconsin in the last 30 days. Just because we’re seeing a tremendous spike in college-age young adults does not mean that we’re not having an increasing risk of transmission in other age groups — including people over 60.”

Remington also rejected Allen’s attempt to differentiate between “a positive test” and illness from COVID-19. 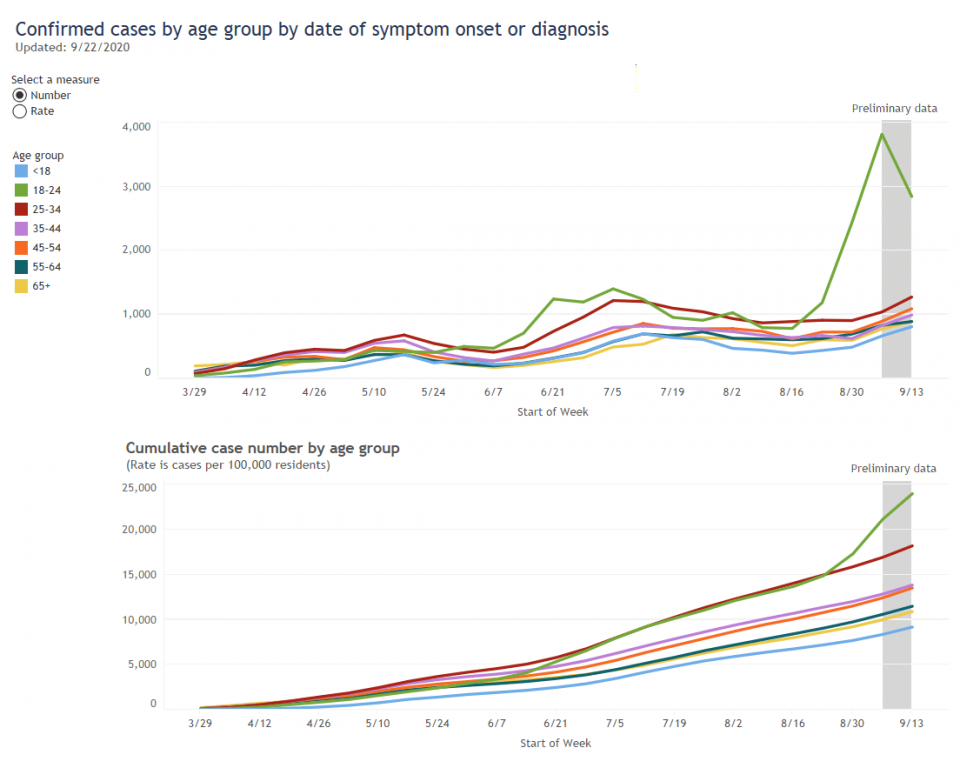 “Positive tests demonstrate infection, and from what we know about COVID-19, that is an illness,” Remington said. Although some people, especially younger adults, might show mild symptoms or none at all, “it’s a viral infection that causes inflammation, that causes damage in the lungs and other organs, regardless of whether people are having symptoms. I don’t think we should be cavalier about that.”

It may be years or even decades before the long-term effects of the virus are fully known or understood, he added.

Even if people in that 18-24 age group are less likely to experience severe effects — which is by no means certain — “there’s good evidence that young adults are as capable of spreading COVID-19 to their parents, their grandparents and friends as well as a person of any other age.”

The new order seems likely to trigger a new round of conflict between the Legislature’s Republican leadership and the governor’s office over the power of the state’s chief executive to combat a public health hazard.

At the time of the Aug. 1 order, Senate Majority Leader Scott Fitzgerald (R-Juneau) threatened to call the state Senate into session to overturn it. That never happened; some Republican lawmakers indicated there were not enough votes to block the order.

That order is the subject of a lawsuit filed by the Wisconsin Institute of Law and Liberty, which claimed that the governor had no right to issue it. WILL, which has previously challenged the Evers administration on other issues, argues in its suit that the governor could only declare a new health emergency if the pandemic had first gone away completely.

In a statement Tuesday, the conservative law firm reiterated that argument.

“The declaration of a third COVID-19 emergency — in effect a continuation of the earlier emergencies — by Governor Evers represents a gross abuse of power,” WILL stated, claiming that “to interpret the law otherwise would allow one-person rule by the Governor for what could be a virtually unlimited amount of time whenever the vague statutory definition of a ‘public health emergency’ or ‘disaster” can be said to be present. The result would be the total breakdown of our constitutional order.”