By Isiah Holmes, Wisconsin Examiner - Sep 17th, 2020 02:26 pm
Get a daily rundown of the top stories on Urban Milwaukee 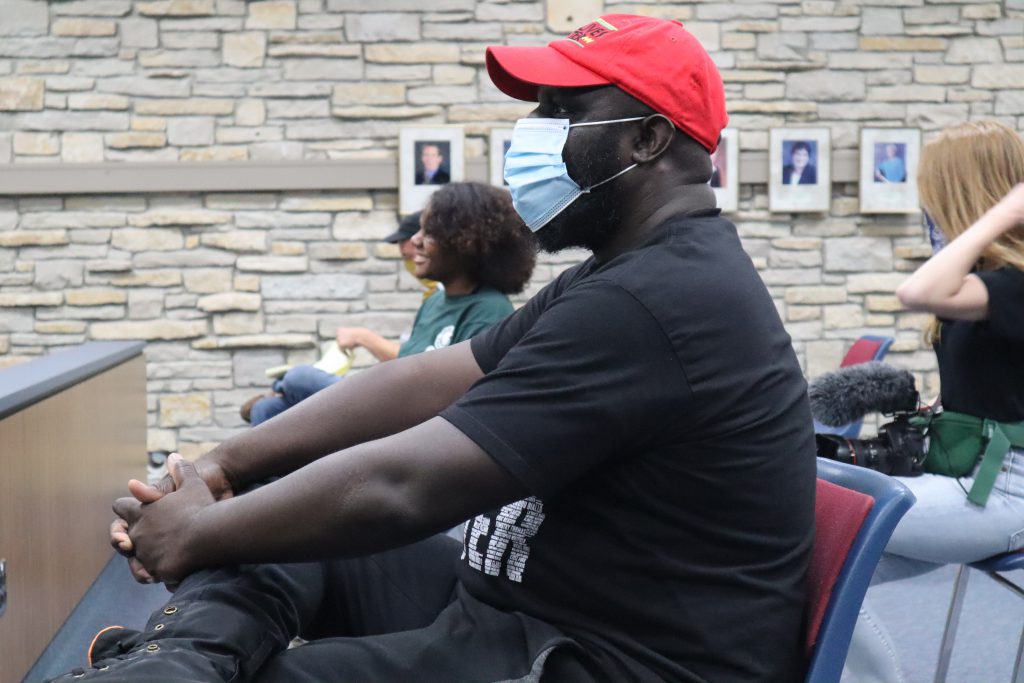 John Larry, chair of Wauwatosa’s Ad Hoc Committee on Policing and Systemic Inequalities, did not hear about the Wauwatosa Peace Officer Association’s (WPOA) attack on his character and on the committee itself, until days after the police union issued its statement. “What the president of this police organization attempted to do was taint my character and who I was as a person,” Larry said.

The union denounced Larry, saying he has direct ties to The People’s Revolution (TPR), a group that has been leading Black Lives Matter protests mainly in the Milwaukee area. In Wauwatosa, their focus has been on three shootings by a single Wauwatosa police officer.

John Milotzky, president of the WPOA, which functions as the Wauwatosa Police Department’s union, issued a press release which was first reported by the Milwaukee Journal Sentinel. “His [Larry’s] actions alone are cause for concern,” said Milotzky. “But then connect those actions with his affiliations with three people that were criminally charged regarding the attack on Mensah. So it’s the combination of both of those are what is really disturbing to us.”

Milotzky was talking about an incident which occurred on August 8 at the home of Officer Joseph Mensah. Marchers from TPR and local residents held a demonstration outside the officer’s home. Mensah has been the focus of protests in Wauwatosa over recent months, after he shot and killed a third person during a five-year period. Protesters have pointed out bits of the department’s questionable past, and how it responds to demonstrations in the present as further reasons change is needed.

During the protest at Mensah’s house, one of the protesters fired a gun. No one was injured, but Mensah and the police department made public statements denouncing the threat of violence and a heated public debate ensued.

Larry was not at the protest at Mensah’s house

Rep. David Bowen (D-Milwaukee), who was at the protest at Mensah’s house, said that Mensah himself had threatened protesters and that the claims of violence by protesters were exaggerated.

WPD Chief Barry Weber made appearances on conservative talk radio shows calling Bowen a liar, and pledged that WPD would more aggressively police the demonstrations. “The Wauwatosa Police Department will not stand by and allow this type of intimidating, aggressive, dangerous, illegal behavior to occur, especially under the guise of peaceful protests,” Weber said in a press release on August 11.

In recent weeks police have used a variety of escalating tactics against the protesters of TPR. Larry says that the fact that he wasn’t present during the Mensah incident makes the WPOA’s association of him with the event misguided. “The president of this organization is attempting to basically label the People’s Revolution as a violent group of people — and in doing so, saying that I am a part of this violent group of individuals protesting. So, therefore, I am violent as well … and I should have no say or position on this committee, because what it does is hold the police accountable.”

Milotzky didn’t stop at calling for Larry’s removal. The WPOA has called for the entire ad hoc committee, which was formed in July, to be disbanded. “We’re not interested in working with a committee that has those affiliations with the people that attacked one of our officers,” Milotzky said.

Three people who were part of the demonstration that day have been arrested in connection with the incident at Mensah’s house. Witnesses, including Bowen, assert that the officer was the aggressor, and that no one tried to shoot at him directly. WPD has not responded to Wisconsin Examiner’s requests for comment to confirm whether the Mensah incident is still under investigation.

Milotzky went on to state, “the WPOA demands a detailed plan of action to immediately disband the ad hoc committee. This plan should identify measures to exclude members of The People’s Revolution from any proceedings pertaining to Officer Mensah, Chief Weber, and any other member of the WPOA. And it should also include actionable recommendations for holding The People’s Revolution and its members accountable should they compromise public safety — and the safety of police officers — in the future.”

The WPOA president also called out Attorney Kimberley Motley in his statement, noting that she is representing Bowen in relation to the Mensah incident as well as representing the families of those killed by Mensah. Milotzky condemned what he described as Larry’s “associations” with Motley, Bowen, and the marchers of TPR.

Larry is the third person of color whose integrity has been attacked by local police officials and the ad hoc committee is the second city body meant to address equity and police issues that those officials have said should be dissolved. “They did the same to Sean Lowe, who is the chair of the Equity and Inclusion Commission,” said Larry.

Lowe spoke during a public listening session held in Wauwatosa in July, that centered on race, inequality, and police issues. Shortly afterward, Chief Weber called on Lowe to be removed from his position, and urged the city to question why the commission was even needed. The chief also criticized the commission for having multiple people who “[harbor] negative feelings toward the police.” Weber, who called Lowe’s speaking during the session “abhorrent,” had also just lost a battle in City Hall over a choke hold ban for officers. The ban, which was recommended by the Equity and Inclusion Commission, ultimately passed.

“I think there’s a huge disconnect in understanding,” Lowe told Wisconsin Examiner, “not only in Wauwatosa but across this country with the wants and needs of the community, versus the wants and needs of the police department. And I feel that they really need to sit down with a diverse set of community leaders and talk through some of this. Because you can be in support of Black Lives Matter, and be in support of good policing. And good community policing. It doesn’t have to be an either/or situation. You could back good quality police officers, and still go out and protest against violence and injustice.”

Lowe asserts that going to a couple of protests, or being associated with TPR, is not grounds to bar someone from service to local government. “I think it’s really a moot point,” he said. “Even if 100 people were members of The People’s Revolution, that shouldn’t disallow them from serving on any citizen-led ad hoc committee, running for office, or serving in any community. Period. People who are protesting around this country are some of the most engaged citizens in our communities right now. We should welcome and value them looking for service opportunities.”

When asked what his ties to The People’s Revolution are, Larry said, “I support their agenda to obtain justice for all Black and Brown people. But specifically, right now, the family of Antonio Gonzales, the family of Jay Anderson, Jr., and the family of Alvin Cole.”

Those are the three people killed over a five year period by Mensah, with Cole holding a special place in Larry’s heart. “I taught Alvin Cole when he was in third grade at a school in the city of Milwaukee,” Larry said. He described Cole as an intelligent kid who was particularly good at math, and made attempts to improve his life despite mistakes he may have made along the way.

Larry urges the public to “look at the commonalities” between the people WPD has attacked in recent weeks. “Sean and I are both residents of Wauwatosa. We’re both Black. We’re both male. And we’re both intelligent. And we both have a position of power, in a sense, on committees here in Wauwatosa, which is a predominately white city.”

Rather than any affiliations with a group of protesters, Larry feels the problem for the police union is the two men’s roles in organizations that “hold police accountable for better policing. Especially with Black and Brown people who are residents here, as well as guests. Black and Brown guests that come to Wauwatosa to shop, to stay at hotels, to visit family members that they may have, who reside here.”

In recent weeks racist letters arrived in Wauwatosa mailboxes from people who claim to be Wauwatosa residents, urging that the suburb be kept free of “Black people and their lack of morals.”

In his own statement, Bowen said he’d “like to remind the WPOA that the ad hoc committee was formed by the duly-elected Wauwatosa Common Council, because they saw that there were issues in their city that needed fixing, and that those issues would be best addressed by working hand in hand with diverse community members. Meanwhile, the statement the WPOA released today is petty, irresponsible, and implies that they would rather ignore the community and maintain a broken status quo than be part of the solution.”

Mayor Dennis McBride said in a statement to Wisconsin Examiner, “The Common Council created the ad hoc committee of the Council’s Government Affairs Committee, and it will be up to the Council to decide whether the committee will continue and in what form.”

Bowen concluded his statement by saying, “I sincerely hope that the WPOA leadership will take a long, hard look at the message that they are sending to their own officers, people of Wauwatosa Milwaukee, and beyond, and to reconsider their obstructionist ways. Change is coming, and history has its eye on the actions that you choose to take or not take in this critical moment.”