No need to walk them all, though it’s so scenic you might be tempted. 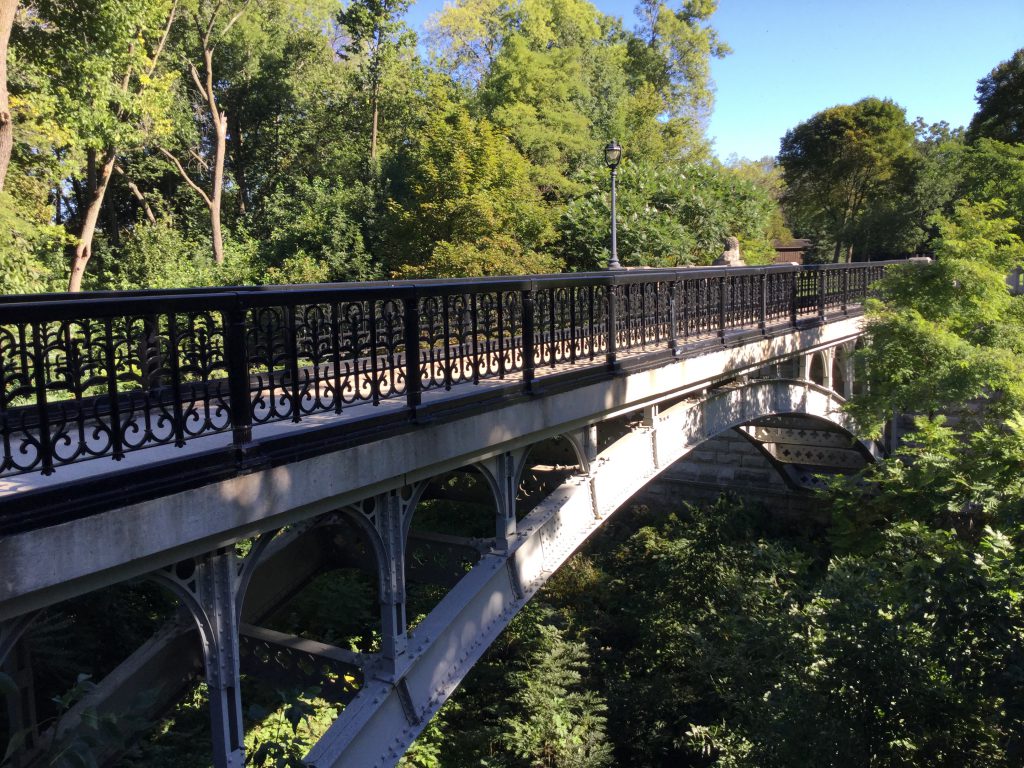 One of the Lake Park Lion Bridges. Photo by Cari Taylor-Carlson.

Distance: About one mile
Start: The entrance to Lake Park at the corner of E. Newberry Blvd. and N. Lake Dr.

Lake Park may not be the largest park in Milwaukee County, but it’s arguably the most scenic. When you turn east off Lake Drive, take a moment to notice the elegant entrance, designed by Frederick Law Olmsted. Instead of a straight line, the road bends and swirls creating an artful doorway into this urban park.

Lake Park, 138 acres in size, sits on a mile-long bluff overlooking Lake Michigan. It has something for everyone young and old, tennis courts, an eighteen-hole, par-three golf course, a bike/walking trail, a playground, free concerts on Monday and Wednesday evenings during July and August, and the popular Fourth of July celebration.

We can thank Gustav Lueddemann who purchased the northern section from the U.S. government in 1849 and built his home there. He kept the forest intact as well as his promise to open the land to the public, which soon became known as “Lueddemann’s on the Lake.” This northern section has the oldest trees in the park, again, thanks to Lueddemann, who may have saved those trees from the early settlers’ voracious appetite for timber in the 1800s.

By 1860, local leaders saw a need for a series of parks for citizens who couldn’t afford the manicured gardens of the wealthy. These parks, or green areas, became known as “Gardens of the Poor.” In 1889, the city fathers created the first Parks Commission. After they began purchasing land, they hired landscape architect Olmsted to design Lake Park, Riverside Park and Washington Park. Olmsted, known for designing Central Park in New York City, believed natural beauty was a necessary restorative for city dwellers living in cramped spaces. To this end, he designed Lake Park with open meadows interspersed with paths that led through shrubbery, forests, and ravines, coupled with views of Lake Michigan. He wanted the park to be a place for both contemplation and activity, which explains the tennis courts and the playground, as well as rustic paths through ravines and forests.

In 1993, Lake Park was entered in the National Register of Historic Places and in 1996, Lake Park Friends was incorporated “to raise funds for the restoration and enhancement of the park in the spirit of Frederick Law Olmsted.” That would include current efforts to remove invasive plants such as garlic mustard, an endless struggle reminiscent of Sisyphus rolling that rock uphill.

In the summer of 2016, another species arrived, hordes of Pokemon Go players. Litter, congestion, and confrontation with neighbors followed, until all “Go” stops were removed from Milwaukee County Parks. Pokemon Go, and the controversy soon evaporated.

Before you leave the parking lot, note the lawn bowling area, well-tended grass surrounded by a white fence. Men in white have been rolling small white balls here for more than 100 years. The game looks easy, until you notice each time someone rolls a ball, it starts in a straight line and ends in a wiggle as it heads towards the target, a smaller white ball called a “Jack.” The closer the ball gets to the Jack, the more points awarded the player.

Across the parking lot, the Lake Park Golf Course, six holes, opened in 1903, expanded to eighteen holes in 1930. In 1911, the Milwaukee Sentinel described the game as “a pasture pastime for a handful of wealthy eccentrics.”

Get a daily rundown of the top stories on Urban Milwaukee
Also adjoining the parking lot is Lake Park Bistro at the site of the former park pavilion, where Sunday morning breakfasts were a happy tradition for many local families who enjoyed the view of Lake Michigan along with their bacon, eggs, and toast. In 1995 Milwaukee County rented the upper part of the pavilion to Joe Bartolotta who established the Bistro with the stipulation that the first floor remain open to the public. As so it has, with a new name, the Marcia Coles Community Room. Walk around the bistro toward Lake Michigan to see the Grand Staircase, completed in 1908, to give walkers access to the bottom of the bluff and for the intrepid, an opportunity for some intense stair climbing exercise.

Return to the parking lot and follow the bike trail at the south end. You will come to Waterfall Ravine and a plaque to remind us of the original inhabitants of this land, Native Americans from the Mid-Woodland Culture, two thousand years ago, who walked a path down the ravine to the shore of Lake Michigan. This ravine, originally cut all the way to Lake Drive, until it was partially filled in to create a meadow and the golf course.

In the 1930s, a lannon stone waterfall was installed along with steps into the ravine, and in 2010, the waterfall was reconstructed. Now Lake Park boasts a thirty-foot waterfall, the highest in Southeastern Wisconsin.

Further down the paved path stands a larger-than-life statue of physician and Brigadier General Erastus B. Wolcott seated on a magnificent steed. The statue was erected at the urging of his wife, Laura Ross Wolcott, who may have been the more interesting partner, as she was only the third woman to earn a medical degree in the country. Erastus was, as noted on the concrete base, “Surgeon General of Wisconsin in the Civil War and for thirteen years afterward he lived a blameless life— eminent in his profession — a lover of humanity who delighted to serve his fellowmen, his city state and nation.”

Continue to the Lion Bridges, constructed in the 1890s to span the two lighthouse ravines. The lions, first designed in plaster, were carved by Otto Lachmund, a stonecutter, a monumental task as there are eight, yes, eight lions!

In 2014, a 32,000-pound semi with a 53-foot trailer took a wrong turn, barreled into the park, and attempted to cross the first Lion Bridge. According to news reports at the time, the driver said, “My GPS told me to go this way.” The driver, who was from Indiana, was cited for reckless driving and failure to obey signs. Apparently, he neglected to notice Ordinance 47.10 which states, “No unauthorized vehicles in park.”

At the second bridge, turn right on the brick path to see the North Point Lighthouse, built in 1855. In the 1870s, its front yard disappeared into the lake, thanks to erosion. Sixteen years later, the current lighthouse was constructed several feet behind the original. If you wish, you can climb eighty-four steps to see one of the best views in Milwaukee. The lighthouse is open weekends, year-round, from 1:00 p.m. to 4:00 p.m.

Return to the path, cross the second Lion Bridge, note the rain garden in a low area of the meadow, and continue to Wahl Avenue. Turn right on Wahl and right again where you will see north and south ravine trails leading to Lincoln Memorial Drive and the lake. Turn right again on Lake Drive and continue to the turnaround at the terminus of Locust Street, one block past the entrance to the park. If you look closely, to your right you will see a prehistoric effigy mound, perhaps used for ceremonial purposes or a burial ground. This Lake Park mound is likely a survivor from a group of mounds, perhaps part of a stone age village that occupied this site. This is the last surviving effigy mound in Milwaukee.

In This Is Milwaukee, Robert Wells wrote, “A picnicker could sit on the side of an Indian mound and eat a liverwurst sandwich without realizing he was in the presence of a monument to a vanished time.”

Retrace your steps to the park’s entrance and follow the road back to the parking lot.] 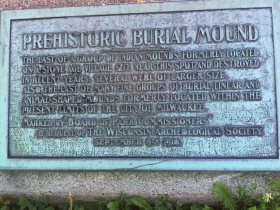 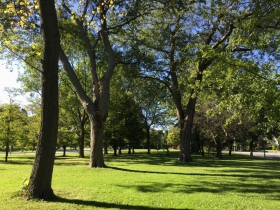 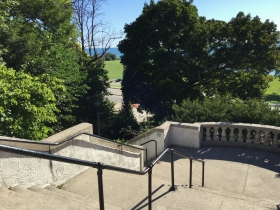 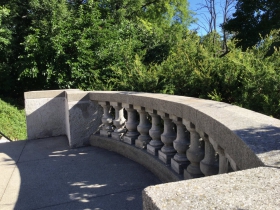 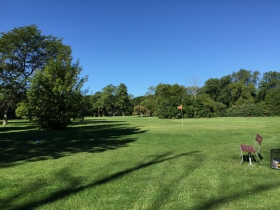 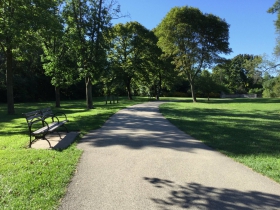 One thought on “Milwaukee Walks: Lake Park Has 138 Acres”