Policing Protests Is More Than ‘Law and Order’

Police officials and experts say responding to protests is a complicated job. 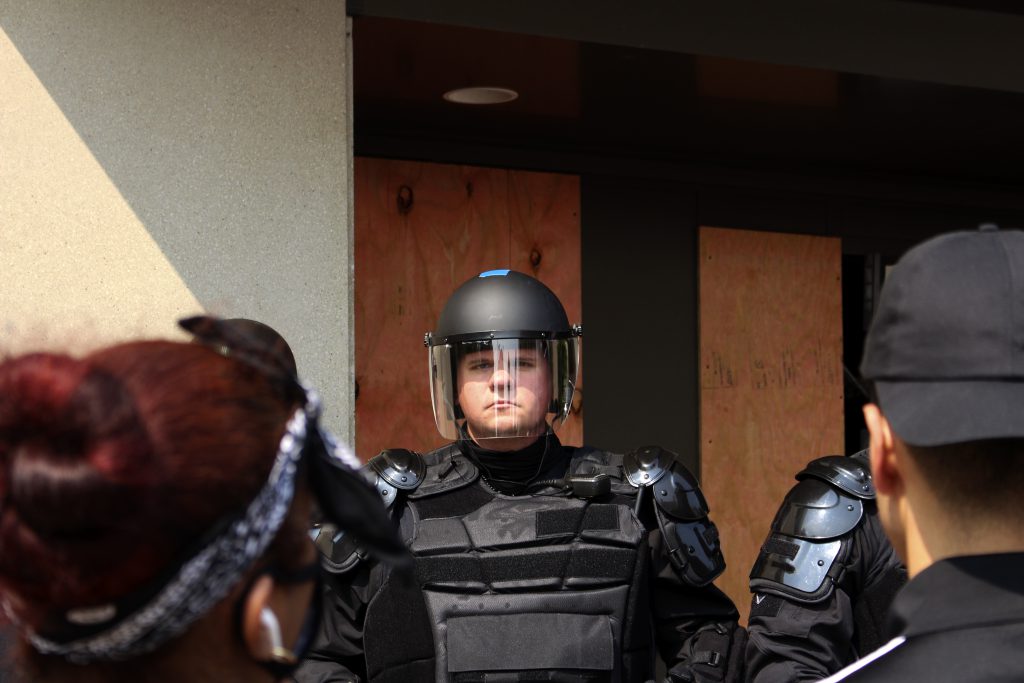 After highly visible acts of police violence this summer, protests for racial justice spread across the country, including in Wisconsin — sometimes resulting in violence and property damage.

In late June, protesters in Madison tore down two statues outside the Capitol building. In August, protesters in Kenosha burned down buildings following the shooting of Jacob Blake by Kenosha police. During the Kenosha protests, a 17-year-old white vigilante killed two people.

Following these incidents, state and federal Republican officials condemned the actions of Democratic governors and mayors, saying it was their “weakness” that allowed the violence and property damage. Democratic Gov. Tony Evers, meanwhile, asked President Trump not to come to Kenosha, saying Trump’s presence only served to stir up division and potential violence. 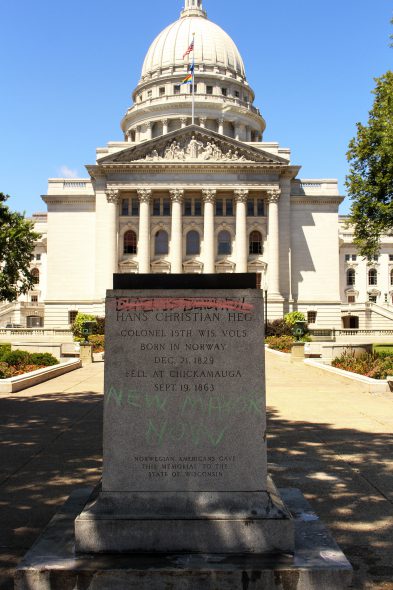 The pedestal that held a statue of Colonel Hans Heg. Photo by Henry Redman/Wisconsin Examiner.

“It is a sad state of affairs when Governor Evers asks the president of the United States to stay out of Wisconsin,” Sen. Ron Johnson said ahead of President Trump’s visit to Kenosha. “Throughout this rolling tragedy, I’ve pleaded for calm but also for political leadership that provides the resolve and manpower to end the rioting and allow the safe reopening of downtown Kenosha.”

“Those people did not have to die, and because of Tony Evers’ actions, they’re dead,” Vos said on WISN. “People are literally dead because folks have had to take to themselves to try to protect their own property.”

After the statues of Civil War Colonel Hans Heg and “Forward Wisconsin” came down outside the Capitol in Madison, Vos asked why the police didn’t immediately respond.

“How come it didn’t happen in the first place that within a matter of hours, we’re able to deploy the police, so it never happens in the first place?” Vos asked. “That’s really where it seems like that the priorities are upside down.”

Trump, after falsely claiming he ordered the National Guard into Kenosha, also blamed Democratic leadership for the unrest following the Blake shooting. In the days after the shooting Trump refused to condemn Rittenhouse.

If Trump hadn’t acted, he said, there “would be no Kenosha right now.”

“Kenosha has been very quiet for the third night in a row or, since the National Guard has shown up,” Trump tweeted. “That’s the way it works, it’s all very simple.”

Except it’s not that simple. Policing experts and police officials in the state say that responding to protests is a difficult, dynamic and nuanced job that requires balancing First Amendment rights with public safety.

“I’m speaking in general terms here but a unified command post with multiple agencies represented, they’re seeing a much larger picture than just statues coming down,” says Brent Plisch, an assistant chief with the UW-Madison police department. “As horrible as property damage is, there’s more complex issues at present that may create different priorities.”

Republican officials are asking for an overwhelming show of force from law enforcement to tamp down riots, but protecting public safety isn’t always quite so simple.

“In a lot of situations when police escalate the situation — show up in riot gear or micromanage the crowd — it can be counterproductive,” says Tom Baker, a former police officer and doctoral candidate in criminology at the University of Missouri-St. Louis. “Another word for these protests is demonstration — the people organizing and on the street are trying to demonstrate something to each other, to politicians, to their community. It’s not just them engaged in this drama. It’s also the police officers playing a role. Police departments recognize that if we go in heavy-handed, it may reinforce the messages.”

As the protest movement has evolved over the summer, some departments have adjusted their tactics — often staying less actively engaged to keep the situation from escalating. But, Baker says, it’s not a binary choice between sending in riot police or leaving the crowd alone. Often there are a lot of factors at play when making these strategic decisions.

It’s also important, according to Baker, for these decisions to be made locally. Local officials understand the history of an area’s activism. For example, both Madison and Portland have a community history of activism dating back decades.

Local officials understand this context better than any outsider — whether a senator from Oshkosh, an Assembly speaker from Burlington or a president from New York.

Besides being familiar with the history of a place and its particular protest groups and leaders, local officials know the local terrain. Baker says. In Madison, protests have largely taken place near the Capitol — an unusual street layout on a tiny strip of land. That geography plays into the decisions police make.

“It’s about striking a balance,” Baker says. “It’s also overly simplistic to say police should stay out of the way. It really is going to depend on the totality of the circumstances, including the geography, the history with the community and, ideally, long ahead of time a good professional police department will have ties with the community to know when things are getting out of control.”

Sometimes responding with a large number of forces is required, he says, but police officials need to be cognizant of what that means.

“There are instances where the police do need to intervene and stop something, it’s this balancing act,” Baker says. “You need to weigh the costs and benefits of using policing powers. In the end it’s a coercive act. They’re not asking nicely, it’s this implicit threat that violence will be used. It’s a blunt instrument.”

Baker, who studies individual interactions between police officers and members of the public, says that it’s a reasonable strategic decision to allow some property damage when sending in officers to intervene poses a greater risk to the safety of the protesters and officers. Every decision, he says, comes with a cost-benefit analysis and sometimes protecting a statue costs too much.

“Allowing a certain amount of criminal activity because the act of stopping someone may escalate things and make things worse,” he says. “The stuff I study, which is these individual encounters, I see a lot of times where the officer holds the line and it’s an escalation. There need to be opportunities to let off some steam, maybe destroying a statue is needed.”

Rather than the blunt instrument of rolling into a protest in MRAPs with tear gas and batons, it’s often more useful to use a scalpel, according to Dr. Ed Maguire, a professor of criminology at Arizona State University. Maguire’s research includes a report published in the aftermath of the protests in Ferguson, Missouri that served as a catalyst for the current Black Lives Matter movement.

If the police are perceived as having overreacted to a protest, especially when the police themselves are the focus of that protest, all that accomplishes is escalating and reinforcing the protesters.

Often, Maguire says, in a large group of protesters there’s a small contingent who are likely to start acting violently or damaging property. What police need to do is respond with precision to stop those people from behaving dangerously while allowing the majority of the group to continue to protest.

“If you have people throwing harmful objects, lighting fires, those people need to be arrested and prosecuted,” he says. “We’re often not seeing that, we’re often seeing [police response be] both too soft and too hard. Too hard in that they’re using enforcement action against people they shouldn’t be and they’re too soft in not taking action against people who need to be.”

“I think the typical police thinking is, if it’s a 100% peaceful protest the police will respond in a peaceful manner,” he continued. “As soon as you have a little bit of violence, the police thinking is completely binary. We’re seeing riot responses before we have a genuine riot, which can end up fueling a riot. The hard part of all of this is what to do when you have a large group of largely peaceful protesters and some people engaging in riotous behavior. It would be great if these protests embraced Ghandian behavior; we know that’s not the case. Even peaceful movements will have some people who embrace more radical tactics.”

In Madison this summer, Plisch says, some historical strategies have had to be adjusted. In the past, UW police would attempt to engage with protesters and arrive at the event early in order to speak with people.

Plisch says that the campus police often work with student organizations to develop safety plans for the protest.

This summer, because the tensions between police and protesters have been so high, that effort to engage hasn’t happened.

But, even without that initial back and forth, he says the responding departments and local civil authorities are working with a lot of information to strike a delicate balance.

“It’s a way more complicated topic than you need a lot of boots on the ground or in the opposite direction … The complications are mind boggling when it comes to these types of events,” Plisch says. “I can’t understate the complexity that goes into planning and preparing for and being a part of any demonstration, peaceful or not peaceful.

“I think the tactic is no longer acceptable, with a dozen or so agitators, you can’t just use chemicals like pepper spray or OC on the whole crowd,” he continued. “There’s timing of when officers become available to intervene, they’re also out doing other things in the community, there’s tactical considerations regarding other priorities, intelligence that says this is just a small event compared to what’s going to happen at a different location.”

Plisch says that another complicating factor is how a peaceful protest can turn violent “on a dime,” but that watching for flashpoints is more important than rolling in with force, as the conservative political discourse has pushed for this summer.

But this summer that tactic has backfired. Evidence of police overreaction poured in from across the country and police officers in Kenosha were caught on tape expressing support for armed militias in the streets — including Rittenhouse.

Those actions, Maguire says, have the exact opposite effect on tamping down riots. In his report, “New Directions in Protest Policing,” Maguire writes that any crowd is mostly made up of “moderates” who simply want to express their discontent and the cops should avoid radicalizing those moderates, since responding too harshly aligns those moderates with the group’s more radical members.