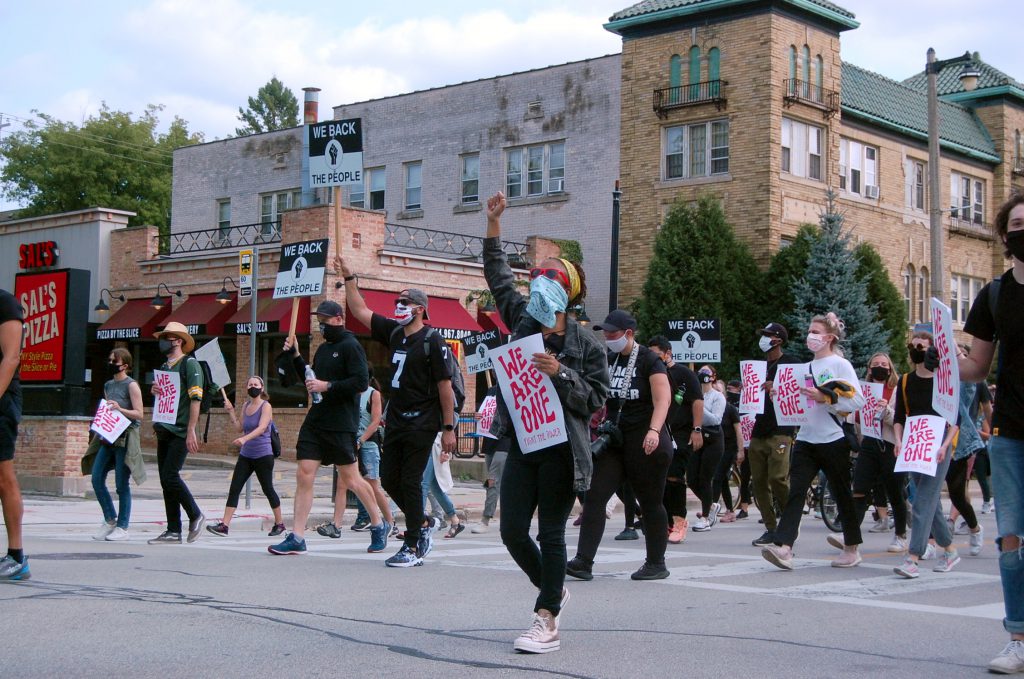 A group of around 100 Black Lives Matter protesters marched from the North Point Water Tower to the northern edge of Shorewood on Sunday to bring awareness to racial inequality in Milwaukee.

The march left the fountain by the North Point Water Tower at 3 p.m. and marched west on North Ave. until turning north on Oakland Ave. The group stopped at the Draft and Vessel beer hall (4417 N. Oakland Ave.) before turning back and walking to the water tower via Downer Ave. The walk to Shorewood and back was almost six miles.

Protesters chanted “No justice, no peace,” and “Black lives matter,” as they passed through the college neighborhoods in the Upper East Side. They chanted different variations, including  “Black trans matters,” “Black women matter,” and “Black boys matter.” Some protesters held signs with “We are one” printed on them and handed them out to pedestrians in front of homes and stores.

“Right now, it’s about everyone coming together,” said Darius Smith, who co-organized the protest with veteran Charles McCoy. “My goal is to bring awareness, show people that may not have the same mindset out here that I’m ready for change, racism is a thing and white silence is violence,” said Smith.

Smith said organizing his own marches is about personal accountability. “I’m only responsible for myself and the things that I do and say. I know the things that I want personally for myself,” he said. “I want to let people know there’s other ways to get their voices heard other than anger.”

Before the march started, TaMara Moore was selling t-shirts with “Black Lives Matter” and “No justice no peace” printed on the front and back of them. Moore had driven from Street Talk Tees in Ohio to sell shirts and partake in the protest.

“We created the shirts to keep the message out for everybody,” Moore said. “So even if it’s not a protest or rally, if you’re wearing these shirts and people see you in the neighborhood, they’ll think something needs to change.”

Moore said his reception in Wisconsin has been warm. “Kenosha was phenomenal,” he said. “We went two days after the violence, and we were shocked by the damage there. But the turnout was unbelievable. It was our biggest and fastest sell out in the whole time we’ve been doing this, which is four months now.”