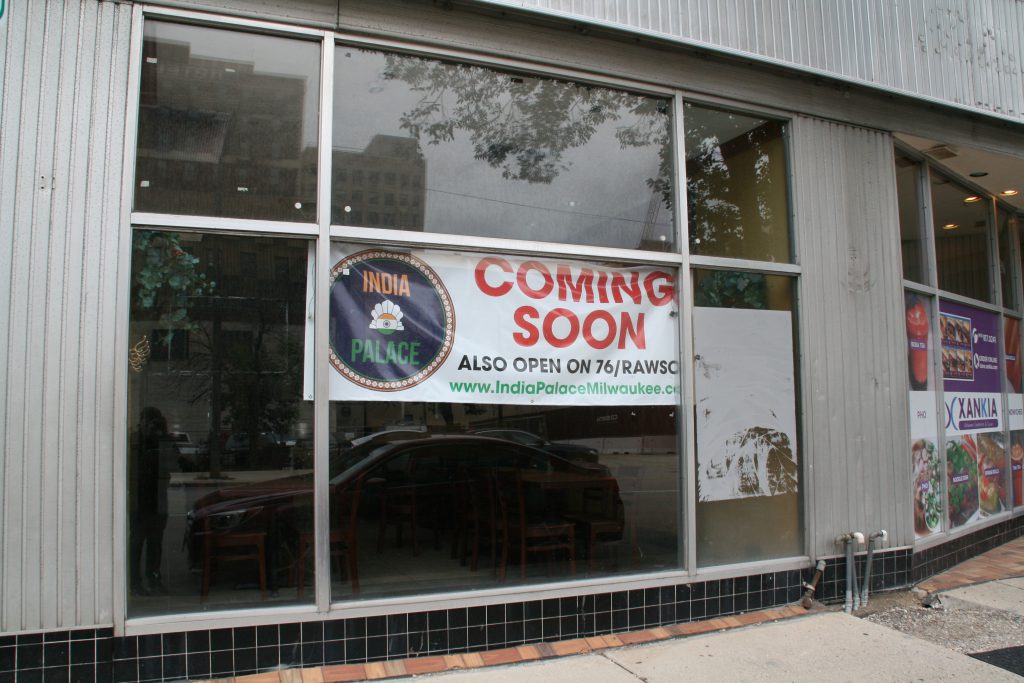 India Palace Downtown, a restaurant that will specialize in Indian cuisine and serve beer and liquor, is coming to the old Shah Jee’s downtown location (228 W. Wells St.) that closed for good at the beginning of 2020. This marks the second location under the India Palace name, with the first located at 7107 S. 76th St. In Franklin. The restaurant will be owned and operated by Deepak Dhiman (operator of India Palace’s Franklin location) and Jagdish Patel (owner of Indian Kitchen & Grill food truck that operates in Waterford and Waukesha). Milwaukee Record’s Matt Wild reports:

According to a license application filed with the city …

The Wells Street India Palace has a bar and bar seating on the east wall; the entire location can hold 50 people. A proposed opening date of August 2020 has already passed, so we’ll keep our eyes peeled for an updated date.

Chuy’s Red Tacos, a new food truck specializing in birria (a Mexican stew traditionally made with lamb or goat) tacos, will make its Milwaukee debut on September 15 at 4511 S. 6th St., outside of the Farmhouse Paint Bar & Banquet Hall. The truck will be owned and operated by Jesus and Thaime Nanez, the owners of the Farmhouse bar. OnMilwaukee’s Lori Fredrich reports:

As for those birria tacos, Nanez says guests will be able to enjoy them filled with a choice of beef, chicken or a uniquely delicious vegetable-based filling made from hibiscus flowers.

In fact, vegan and vegetarian diners will be well cared for at Chuy’s, which will offer vegan cheeses and vegan-friendly housemade beans.

Tacos will be available made with guests’ choice of corn or flour tortillas and topped with cilantro and onions, notes Nanez. But guests can also request additions like mashed avocado, lettuce, tomato, sour cream, fried onions, jalapenos…

guests can also expect to find a treat sometimes referred to as a “quesabirria,” a variation which adds melted cheese (either traditional or vegan) to the mix, creating what could be described as a cross between a birria taco and a quesadilla. And those can be prepared as dorado tacos with tortillas which have been cooked on the griddle for a longer period so that they’re crispier on the exterior.

Vegan beans, rice, quesadillas, burritos and nachos will also be served, with menu pricing expected to range from $2.50 for basic tacos to around $8 for burritos. Drinks will also be available at The Farmhouse bar, including wine, beer, coffee, palomas, margaritas and mango, strawberry and traditional Micheladas.

…all customers are asked to wear a mask when not eating and to maintain social distancing at all times.

Once open, Chuy’s Red Tacos hours will be Tuesday through Sunday from 11 a.m. to 10 p.m. Both socially distanced dining and carry-out are available. Delivery will be launching in the coming weeks.

Don Davey, who played five seasons for the Green Bay Packers and went on to play as defensive lineman for the Jacksonville Jaguars, is opening a Firehouse Subs franchise in Menomonee Falls at N92 W16135 Falls Pkwy with his business partners Eric Erwin and Scott Anthony. This is the fifth restaurant opened by the trio since 2012.

This Firehouse Subs location closed a few months earlier in 2020, but Davey and his partners made the decision to breathe new life into the business.

“When this restaurant closed a few months ago, we knew we had to find a way to reopen the doors and continue to serve the Menomonee Falls community,” Davey stated in a press release. “As a Wisconsin native, I’ve been dedicated to sharing our delicious food, heartfelt service and commitment to giving back with my home state.”

Firehouse Subs will officially open on September 15 and will operate Sunday through Saturday from 10:30 a.m. to 9 p.m. Orders can be placed online, through the Firehouse Subs app or by calling in.

Teriyaki Madness, a fast-casual chain based out of Denver, Colorado, has plans to open five locations in the Milwaukee area by the end of 2020. Teriyaki Madness serves made-to-order bowls of Asian-inspired stir fry featuring items such as Orange Chicken, Spicy Tofu or Salmon Teriyaki served over rice, noodles or steamed vegetables. The restaurant also offers a catering service. BizTimes’ Maredithe Meyer has the scoop:

The company announced Thursday that its first area franchise location will open in mid-September at 920 S. Moorland Road in Brookfield, followed by additional locations in Hales Corners, Wauwatosa, Germantown and Pewaukee.

The Brookfield location will be located in a multi-tenant building, where Summit Credit Union has a branch location…

In March, Teriyaki Madness submitted plans to the City of Wauwatosa for a restaurant at 12345 W. Capitol Drive, but it seems a new site was since chosen. The company’s website pins an unspecified location at the corner of West Harwood Ave. and West State Street in the Wauwatosa Village as ‘coming soon.’

The restaurants will be operated by Restaurant Sherpas, an affiliate of Teriyaki Maddness that runs the company’s franchise locations.

Teriyaki Madness in Brookfield will hold grand opening events and promotions from Sept. 16 to Sept. 19. 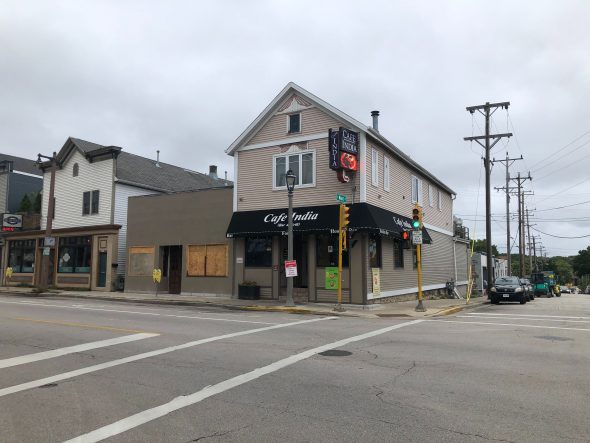 Cafe India, a popular lunch buffet specializing in traditional Indian entrees and cocktails, is well underway expanding its Bay View location at 2201 S. Kinnickinnic Ave. According to owner Rakesh “Ryan” Rehan, the expansion is expected to be finished by the end of this month. Urban Milwaukee  reports:

According to documents submitted to the city, a building permit was applied for in March 2019, but according to owner Rakesh “Ryan” Rehan, design changes and the COVID-19 pandemic slowed down the construction process.

The permit describes the expansion as a 1570-square-foot building addition with associated level two alterations to the 4893-square-foot, mixed-use building in which Cafe India currently operates. According to the permit, the expansion will provide additional dining, two toilets and storage room for Cafe India. The upper residential unit of the building will remain as is. The permit was issued to Thomas Stachowiak, the president of Stack Design Group, an architectural firm located in Milwaukee.

According Rehan, the building add-on will replace an outdoor patio area. He notes that having a dining area he could utilize for more than three or four months out of the year seemed like a better business plan.

With the additional space, Rehan plans to host special events for holidays such as Diwali (the Hindu festival of lights) and will have TV’s installed for screening sports games and Bollywood films. He also plans to install a karaoke machine and new sound system.

The brunch spot’s dining room remains closed because of the pandemic, but it has set out more patio tables — distanced — where customers can pause to eat after picking up their takeout orders. Tables are set up alongside the building and in the garden, which is strung with lights for nighttime dining.

Orders are taken in advance online at exploretock.com/unclewolfies. During dinner hours, customers can order in person at the back door, or they can call (414) 763-3021. Cocktails and beer are available from the walkup. (At breakfast and lunch, the walkup window is at the front door.)

BelAir Cantina, a Mexican-fusion restaurant with five Milwaukee-area locations and one Madison location, has reopened its Brookfield restaurant at The Corners (250 High St.) after completing a 3,000-square-foot addition. The restaurant reopened on September 4 in the new space, and will close off its former restaurant space for additional renovations with plans to reopen again in October.

Get a daily rundown of the top stories on Urban Milwaukee
According to a press release, BelAir was the first dining establishment to open in The Corners. The expansion is a joint venture between BelAir and Brookfield Corners, LLC, and is bringing the size of the restaurant up to 8,150-square-feet, expanding its guest capacity while allowing for better social distancing safety measures. 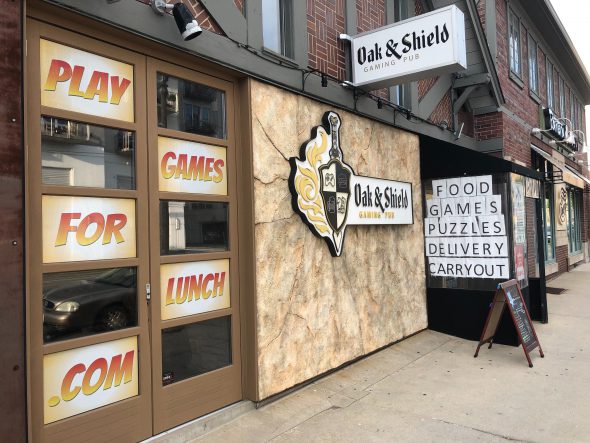 Oak & Shield (600 E. Ogden Ave.), a pub that allowed guests to play board and video games while enjoying gaming-themed food and drinks, has closed its doors for good. A heartfelt statement posted to the pub’s Facebook page by owner Gordon Lugauer confirms the closure. The post reads:

I had held out great hope that our efforts to create and promote our safe-as-possible physically-distant dining experience would be the key to that puzzle. It hasn’t been. Even after opening for in-person dining, the pub is losing money and sales are not increasing – indeed, sales have decreased ever-so-slightly… it is my responsibility to make the call and I can shirk it no longer. The time is now. This adventure is over. The Oak & Shield is closed.

Oak & Shield was opened in 2018 as a joint venture between the pub and Board Game Barrister, a table-top gaming retailer with multiple locations throughout Milwaukee. Guests could try out board games at Oak & Shield free of charge, the idea being that they would eventually buy a copy for their homes at Board Game Barrister if they enjoyed the experience. Oak & Shield reopened for in-person dining on August 21 after temporarily closing due to the pandemic.