Bus route planned in 2019 finally gets county board committee support.

It’s likely the Milwaukee County Transit System (MCTS) will soon operate a new bus route through the City of Milwaukee and to the southern end of the county to the MK2 Amazon Distribution Center.

$100,000 was budgeted for this new bus service — Route 81 — in former County Executive Chris Abele’s 2020 budget. But during the county board’s budget process, supervisors voted to have the funds held until the transit system investigated other ways the money could be used to connect county residents to jobs. 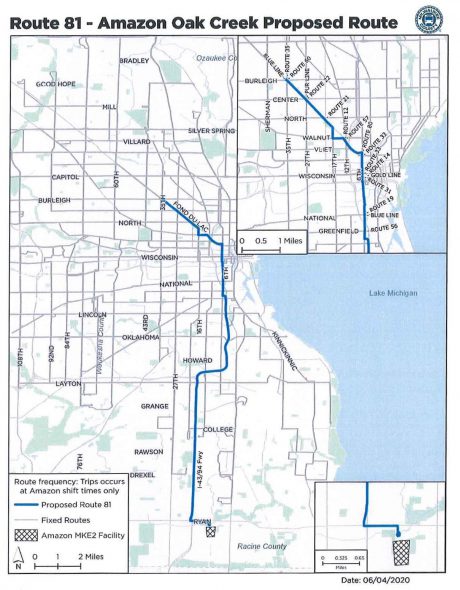 Now the board’s Transportation, Public Works and Transit Committee has voted to approve moving the funds back to MCTS so the system can run a new service to the fulfillment center. Dan Boehm, managing director of MCTS, said the fulfillment center is expected to hire more than 1,000 employees.

In March, the transit system came back to the board with a report explaining that there are some gaps in MCTS service that could be exploited to connect residents to jobs. A major finding of the report was that traditional transit strategy whereby services were tailored to connect to isolated business parks is not an effective policy for connecting residents with jobs. These routes are expensive, serve very few residents and ultimately don’t have a good record with job retention.

The report suggested two alternatives for spending the $100,000. One would have used the money to market and promote existing job opportunities along MCTS routes. The other suggested expanding late-night service for people that get off work late at night, during the system’s lull in bus service. But this plan would have required the cash-strapped transit system to invest significantly more money than $100,000 to effectively address it.

MCTS has always supported the route to the Amazon Fulfillment Center, which has been in development for approximately the last two years. The author of the March report said the proposed Amazon route would be less productive than standard fixed-routes. But the report distinguished it from those that serve solitary, suburban business parks as this route includes partial use of the freeway — cutting down travel time — and serves two shift changes, doubling the potential ridership that a remote business park might see.

The newly proposed Route 81 that went before the committee Wednesday would actually serve four shifts. Boehm said the system has been working with Amazon’s transportation division to understand their shift change times. The new route, he said, would have “Two different trips in the morning. And then as you’re bringing some late night employees back into work, you would be taking those morning folks (back) home.”

Route 81 will begin near N. 30th Street and W. Fond du Lac Avenue. It will run along Fond du Lac until it hits N. 6th Street. Then it will follow 6th Street down to the southern end of the city where it will hop on to I-43/94 for the rest of the trip to the Amazon facility.

While traveling along Fond du Lac Ave. and 6th St., the route will intersect with more than a dozen other MCTS bus routes.

“We want to give opportunities for those that live in our community that are non-drivers to have the ability to work with these new jobs,” Boehm said. The route, he said, will help with Amazon’s hiring efforts, and “it’ll help close the loop on getting people those opportunities.”

The county board will vote on the route later this month.

The route is expected to cost $200,000 to operate in 2021. As county officials work on the 2021 budget, expenses and revenues for this new route will be budgeted for, according to MCTS.

4 thoughts on “Transportation: County Would Run Bus To Amazon Facility”