Celebrating diversity. Paid for by Chris Abele. "We are who we celebrate." 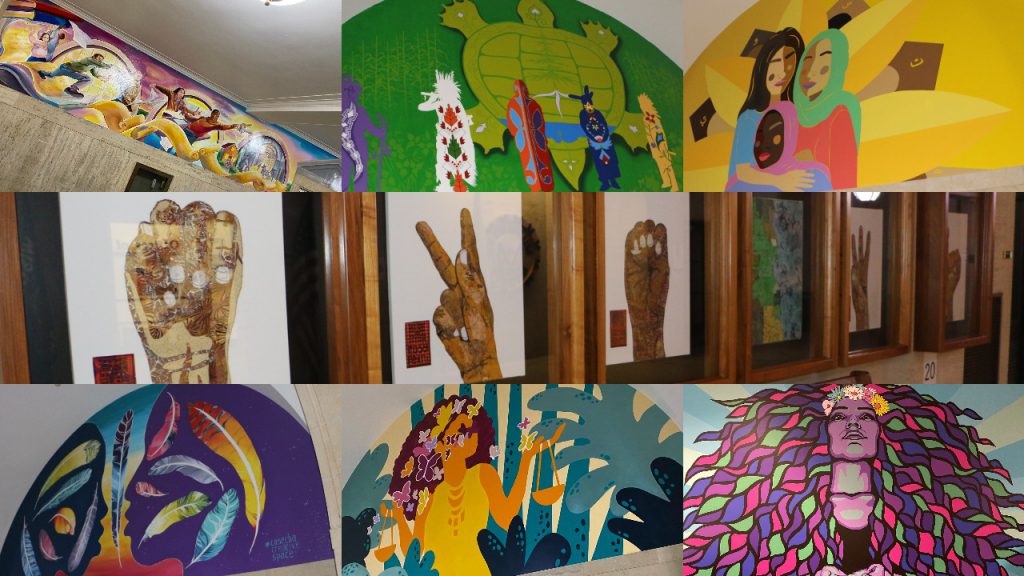 Murals in the Milwaukee County Courthouse.

A group of murals painted at the Milwaukee County courthouse were showcased Tuesday during a virtual press conference.

The murals are intended to brighten up the courthouse, as well as celebrate and better represent the diversity of Milwaukee County.

County Executive David Crowley said the murals are a “splash of color in an otherwise gray building. They represent the hopes and ambitions of marginalized communities as we seek to undo generations of systemic racism that have left them behind.”

There are seven murals, each done by a local artist or art collective. They range from representations of marginalized communities to pieces meant to invoke the past and potential future of Milwaukee.

The work was paid for by former county executive Chris Abele. He said the artists were chosen to represent “a broad spectrum of diversity that reflects the diversity of this community.” He felt it was important for people in the courthouse to see a “broader vision” of the county’s culture and communities. “We are who we celebrate.” he noted. 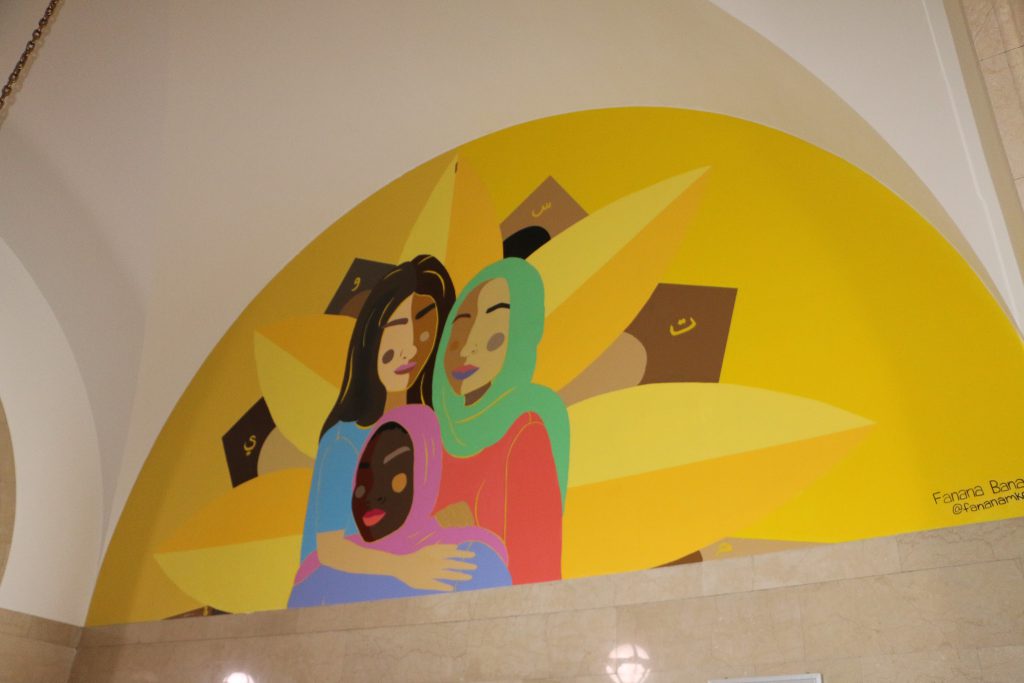 This piece is by the art collective Fanana Banana. Nayfa Naji, one of the co-founders of the collective, said the three figures in the mural are set against a “minimal Middle-Eastern pattern in the background.” And, she said, “Each component of this design is minimal in facial characteristics and broad in skin tone colors to allow the diverse viewers of Milwaukee County to feel represented.” And the arabic letters framing the figures, if put together, say “equal and importance,” Naji said. 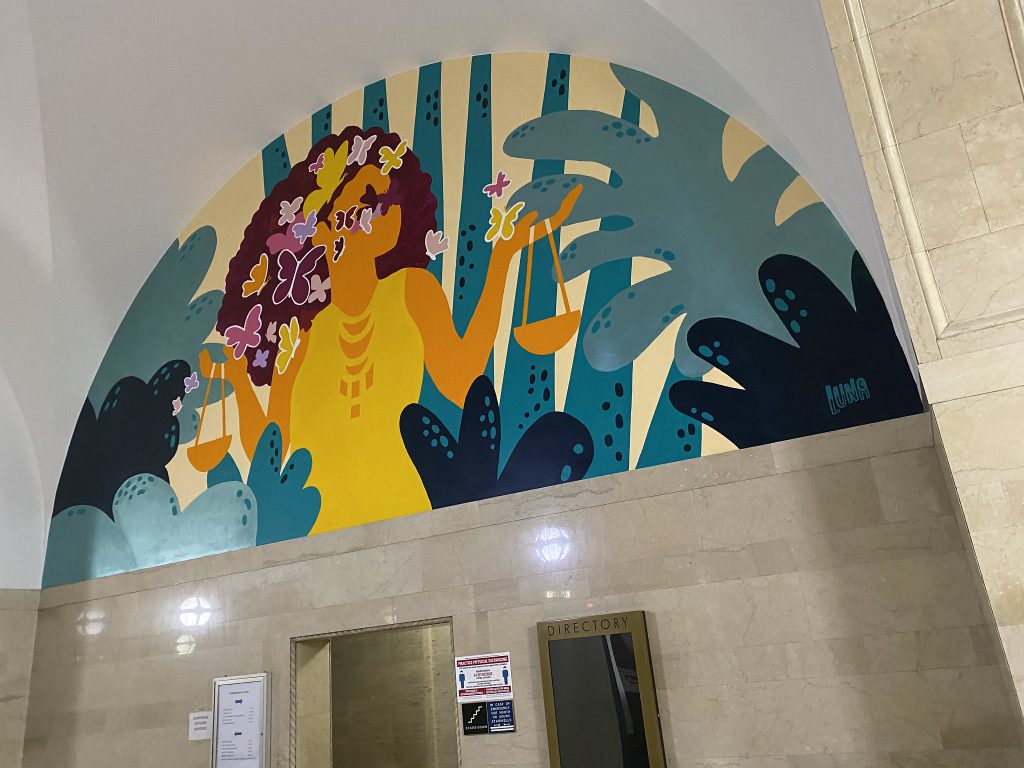 Latinas Unidas En Las Artes or LUNA, contributed this mural to the courthouse. LUNA is an art collective that aims to increase representation of Latinx artists in Milwaukee. The collective decided to produce a new take on “Lady Justice”, the historical personification of blind justice and fairness before the law, and portray her as a woman of color. The piece uses butterflies as a blindfold. And, Katie Avila Loughmiller, co-founder of LUNA, said the foliage in the  piece is supposed to represent a forest or jungle setting Lady Justice is making her way through. 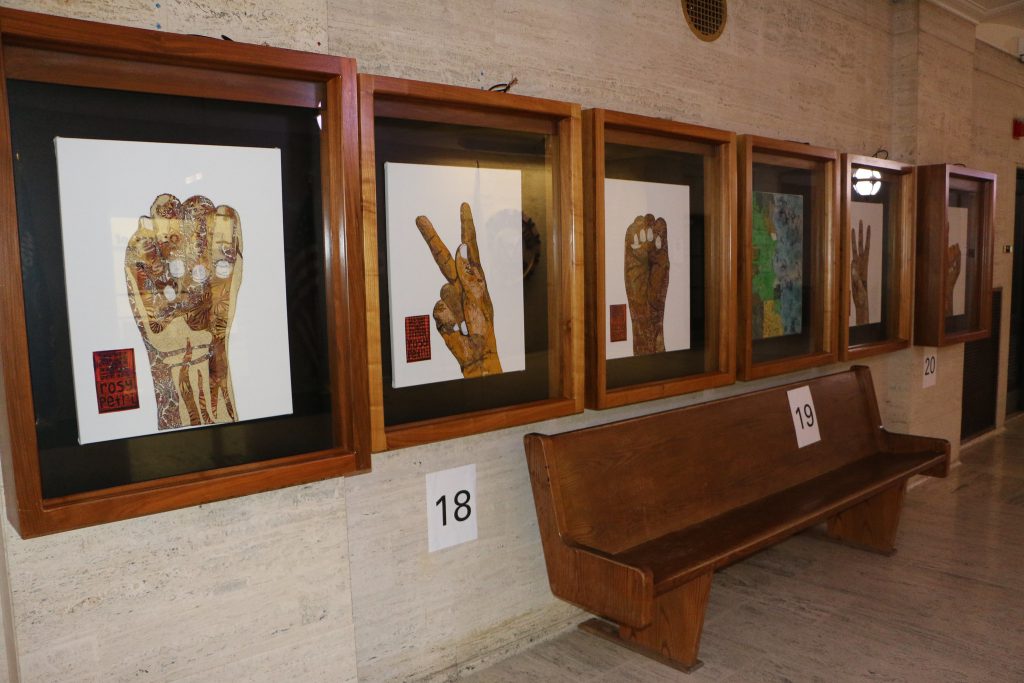 Rosy Petri, who is a 2020 Mildred L. Harpole artist of the year, designed this piece, which she said attempts to hold “the multiple truths of our city.” The series spells out MKE WI in American sign language and the hands “cover a spectrum of skin tones,” Petri said. They are meant as a “reminder that we all belong to the culture of Milwaukee,” adding that, “Whether we like it or not we are in this together, so we get to decide what Milwaukee will become.” 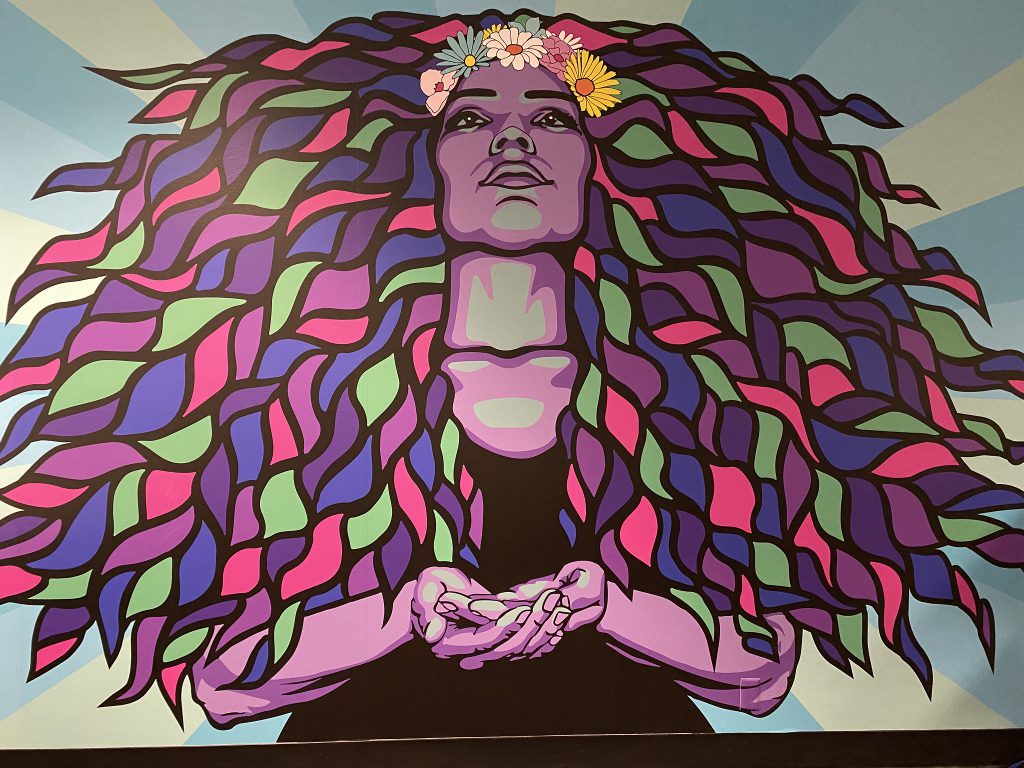 This piece by Black Paint Studios is in the county executive conference room. It’s called “The Goddess of Fierce Protection” and it was first painted on the side of Planned Parenthood’s Wisconsin Headquarters. In a statement, the creators said the goddess is “proud, she radiates light, she’s peaceful and fierce all at once.” 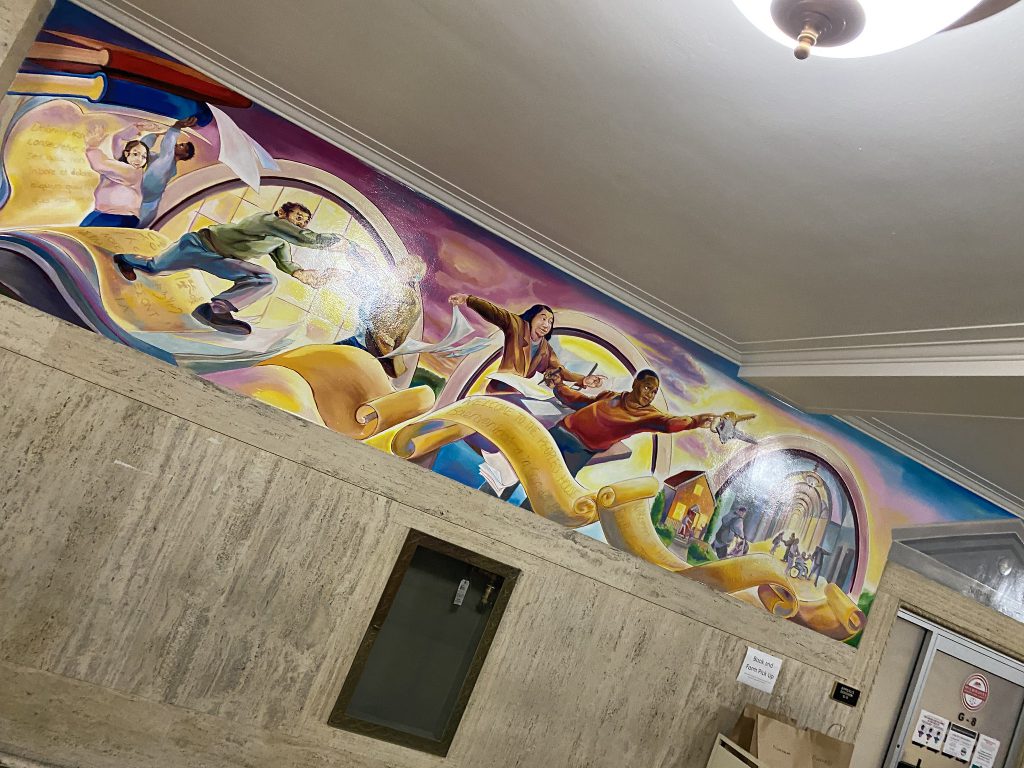 Tia Richardson painted this mural called “The Restoration of Compassionate Law”. Its imagery came out of a workshop that Milwaukee County employees participated in that discussed problems in the county and ways to improve them. “The mural acknowledges the system for what it is,” Richardson said. “The parts that have trouble working together and how it can be better.” The mural is inclusive of many cultures, she said, for example, the scroll has the words “Welcome to the people’s house,” written in several different languages. 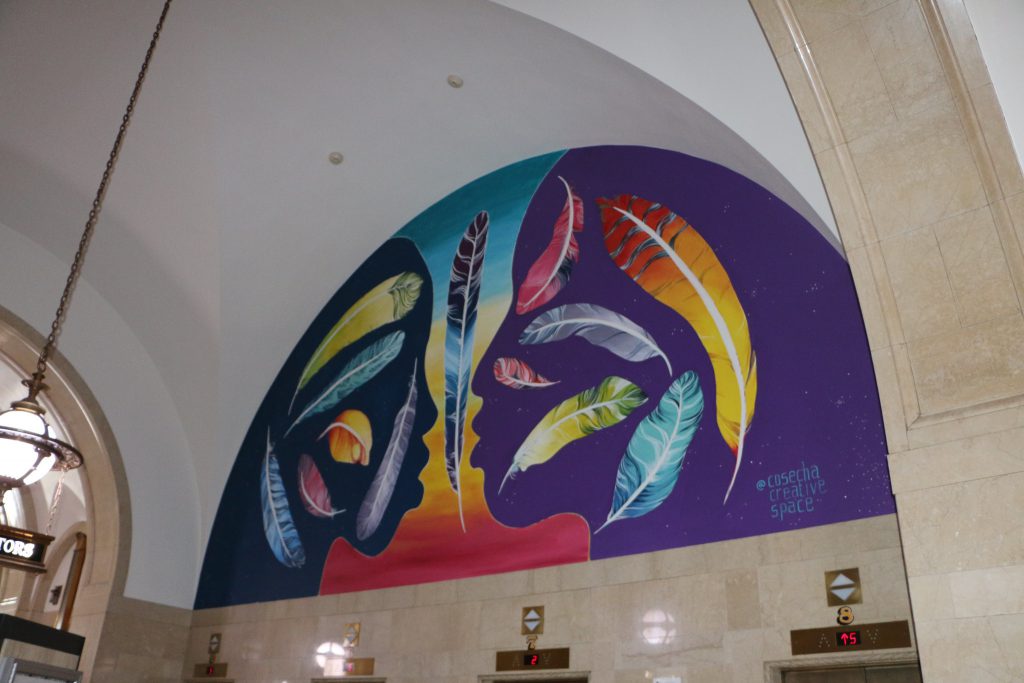 This piece, “The Feathers of Ase”, is by artist CK Ledesma of Cosecha Creative Space. The piece is built around an idea from the Yoruba people of western Africa called Ase, an idea about the ability to manifest change in the world. “This piece invites the manifestation of racial equity and social justice within all spaces that we inhabit,” said Daniel Shuyler-Ledesma, also of Cosecha Creative Space. 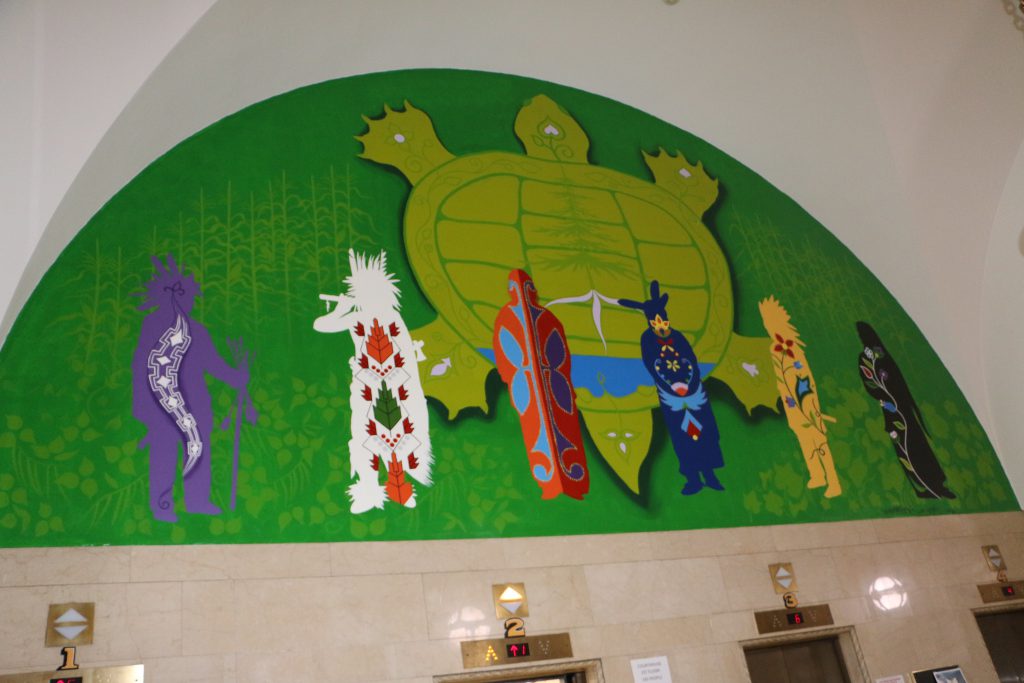 This piece by artist Scott Hill is a representation of the six indigenous nations that live in Wisconsin. Hill said the piece is about “unity and coming together.” The turtle in the mural represents Turtle Island, which is the name indigenous people used to refer to North America. There are six figures with their own unique designs representing the six nations, Hill said, but being set against the turtle, the mural shows that “we all have a connection to mother earth.”