Republicans Angry Yet Asleep on Policing

Unwilling to meet yet offering legislation to micro-manage police reforms in Milwaukee and Madison. 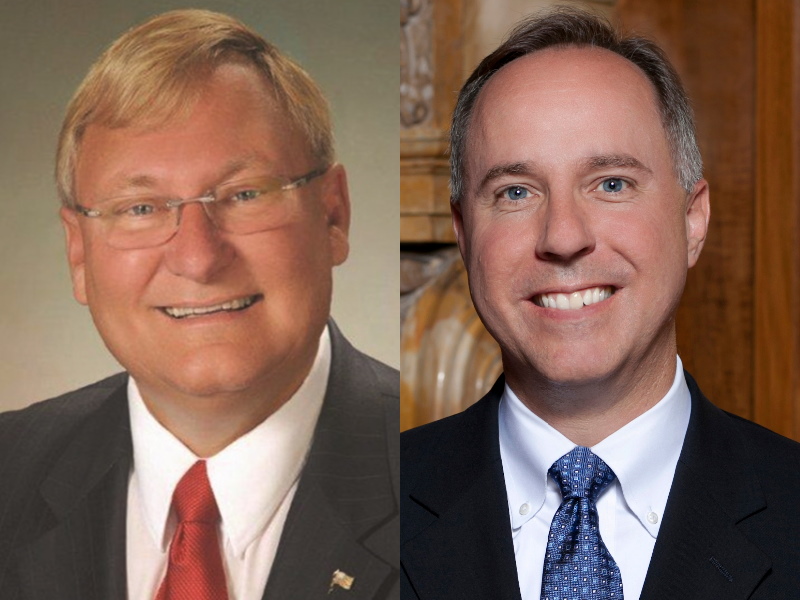 You might call Republican state Sen. Van Wanggaard of Racine the poster boy for the party’s approach to police defunding and other issues. It is not a pretty picture.

Wanggaard is a strong supporter of the police. He was a Racine police officer from 1972-2001, earning lifetime health insurance coverage and a fine pension. After serving 29 years, he collects a pension of at least $33,000 per year. Meanwhile he was elected to the Legislature in 2010, which he allows him to double dip from the government trough: he currently earns $52,999 as a legislator plus a “per diem” for each day the Legislature is in session which averages more than $6,000 annually per legislator (the allowed payment and has risen significantly under Republican leadership).

Wanggaard spent several years as a union board member, helping negotiate higher benefits for employees like himself. Yet he supported Act 10, which cut back such benefits for all public workers except for police and fire fighters in Wisconsin.

Wanggaard’s opposition to union rights that once benefitted him and his support of big cuts in state shared revenue to cities like Racine led to his recall from office in 2012. Why would he have supported a cut of some $2 million in state revenue to the city he represented? As a commentary in the Racine Journal Times suggested, Wanggaard had voted with Republicans on a redistricting plan that assured “he would never again have to face the wrath of angry voters of Racine.”

Which is just what happened. The Republicans gerrymandered a long-time swing district based in Racine into one with that was largely suburban and rural and Wanggaard reclaimed his seat in 2014, waltzing to victory with 62 percent of the vote.

Since then, Wanggaard has not only supported Republican budgets that steadily cut state shared revenue to cities like Racine and Milwaukee, he has threatened even greater cuts, raising concerns from Milwaukee business leaders.

Since Wisconsin created the first income tax, more than a century ago, the state has operated under an approach where much of the money collected was sent back to cities through state shared revenue. In return, cities in Wisconsin were not allowed to pass any local sales or income taxes. But state shared revenue has declined drastically in the last 20 years, dropping from $250 million to Milwaukee in 2003 to $229 million in 2019 during a period when the biennial state budget has grown from $23 billion to $37 billion, as Urban Milwaukee has reported. Had the city’s state aid gone up as fast as inflation it would now be $100 million higher; had it gone up as fast as the state budget it would be $152 million per year higher.

This has left Milwaukee facing disastrous budget choices each year, and the city has been steadily cutting the budget for the Health Department and other departments while maintaining the police budget, until it suffered a small cut in last year’s budget.

And so the current call for “defunding” the police department, at least in Milwaukee, comes after health and social services spending has been sacrificed for nearly two decades in order to fund police. A proposed 10 percent cut in the police budget is arguably an attempt to restore some balance. However the pandemic has cut city revenue so much that the police budget may need to be cut simply to balance the overall city budget.

But Wanggaard has concocted legislation to give cities like Milwaukee no power over their police budget. It would prevent cities from ever reducing their police department’s budget: for every dollar cut from the police budget the state would deduct that amount of shared revenue.

The irony of this was noted by Mayor Tom Barrett. “It is the Legislature that is more responsible than anyone for the fiscal challenges we have and which impact the police budget,” he noted. Last year’s cut of 60 police officers “was a fiscal decision, not a philosophical decision, driven by the Legislature’s refusal to recognize that we need more money in the city,” he charged. “And that will continue to cause us problems in this year’s budget as well.”

The Wanggaard bill is one of eight he has proposed that would dictate many changes in how cities handle the police and their police oversight board, including some that seem designed to give police unions more power. Much of the language targets only Milwaukee (defined by population as a city of the first class) and Madison (defined by population as a city of the second class), the state’s two big Democratic-leaning areas, who have been left with almost no power in the Legislature due to gerrymandering.

Barrett says some of the proposals “are good” (one bill has language to bar chokeholds by police), but some “meddle in local affairs” and “are very very destructive”.

Meanwhile the Legislature has barely met this year and Assembly Speaker Robin Vos has made clear the Republican leadership won’t convene again till next January. The nation and this state face the worst pandemic in a century, the worst economy since the Great Depression, and the tensest standoffs between police and protesters since the 1960s and Republican legislators have blown off Gov. Tony Evers’ repeated calls for a special session to take on these matters.

But every once in a while Vos and Republicans have interrupted their long vacation from legislating to offer angry quotes accusing Evers of “playing politics”, of being responsible for the deaths of people in Kenosha, of mishandling the COVID-19 and more. What praise they’ve offered has been for Wanggard’s proposals, but they weren’t excited enough to consider these bills until about six months from now.

2 thoughts on “Murphy’s Law: Republicans Angry Yet Asleep on Policing”