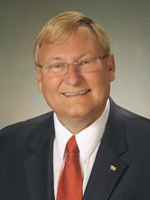 Is there any member of the Wisconsin legislature whose stand on public unions is more vulnerable to the charge of hypocrisy than state Sen. Van Wanggaard of Racine? As a member of the Republican majority, Wanggaard has backed all the measures to cut back union rights and compensation. But prior to becoming a legislator, Wanggaard served nearly three decades as a police officer and several years as a union board member, who helped negotiate higher benefits for employees like himself.

Wangaard downplays his union roots: his 2010 campaign bio was quite long and detailed, but omitted any mention of his union jobs. He was a Racine police officer from 1972-2001, earning lifetime health insurance and a fine pension. After serving 29 years, he would have earned around 62 percent of his final average salary, which for a Traffic Investigator (his last position with the department), would have been in the neighborhood of $54,000, an insider with the Racine Police Department estimated. That would put Wanggaard’s annual pension at around $33,000. In an interview, Wanggaard conceded this was an accurate estimate.

Wanggaard is now double dipping from the government, earning $49,943 as a legislator plus $88 “per diem” for each day the legislature is in session. (The average legislator earns an additional $7,700 per year from this.) He could also earn an additional pension, but this would require him to freeze his retiree pay and Wanggaard says he preferred to continue collecting on his pension, so he is forgoing all state benefits that accrue to legislators.

All told, Wanggaard has done well as a government worker. Yet he supported Act 10, which cut back such benefits for the many public workers in Wisconsin. Wanggaard says he actually worked closely with Gov. Scott Walker to modify the bill and make its language less draconian. “I looked at the original bill and said ‘oh my goodness,’” he says. Whatever changes Wanggaard championed, the final legislation has put many public worker unions out of business.

“A lot of people saw that as a betrayal of his union roots,” says Randolph Brandt, a retired Racine Journal Times editor who helped lead the Committee to Recall Wanggaard. Brandt wrote an impassioned op ed for his old newspaper accusing Wanggaard of “laughing at…the citizens of Racine” and imploring voters to recall Wanggaard and punish him for “his hypocrisy.” Yep, you can be a lot more hyberbolic once you’ve retired from the newspaper biz.

Wanggaard has called the measures to trim worker benefits and collective bargaining “reforms that are working and saving taxpayers money.”  As to Brandt’s claim that his stance today is hypocritical, Wanggaard says its a different time, and the era of double digit increases in health insurances requires governments to rein in costs. Still, that’s a curious stance from someone who has lifetime, government-paid health insurance.

Wangaard’s old police union is endorsing his opponent John Lehman. According to Todd Hoover, president of the Racine Police Association,  their decision came because Wanggard favored measures that have restricted collective bargaining for police, and because Wanggaard’s support for reduced revenue sharing to cities will result in layoffs of police officers. When Wanggard was a police officer, Hoover says, “we had some pretty decent benefits. Now they’re disintegrating.”

Wanggaard is one of four state senators facing a recall this June, and his district is the one where Democrats have the best chance of scoring a victory. Lehman, who had held the district for one term (2006-2010), lost a close race to Wanggaard, who took office in 2011.  This has been a swing district that is fairly evenly divided: in 2010 Walker carried it with 54 percent of the vote, but in 2008 John McCain won just 44 percent of the vote against Barack Obama. A Democratic poll by Public Policy Polling, taken in mid April, showed a statistical dead heat, with Wanggaard at 48 percent and Lehman at 46 percent. (The margin of error was nearly 4 percent.)

One reason Lehman is running stronger than other recall challengers is because he has by far the strongest support among Democrats. The PPP poll showed he had the support of 86 percent of Democrats in the district, suggesting a very polarized race.

There’s been little coverage of the campaign, mostly some reporting by Fox 6 in Milwaukee, which hasn’t touched on Wanggaard’s background as a union rep. But that issue has certainly been bubbling up in Racine.

Lehman has accused Walker and the Republicans of “rewarding the rich” while “union-busting.” He calls Wanggaard’s policies “extreme.” Wanggaard told Fox TV that “John wants to expand everything and he wants to go back to the failed policies that he was a partial architect of with the Doyle budget before.”

Wanggaard has so far raised more campaign donations — about $151,000, compared to nearly $104,000 for Lehman (of which $11,300 came from unions). If money is the measure of who will win the June elections, it could be a big day for Republicans.