Is The Stock Market Betting on Biden?

Two theories on why stock values are rising amid an economic downturn.

In recent months, the stock market has seemed totally untethered from the nation’s economy. While unemployment reaches new highs and the number of jobs hits new lows, stock indices are returning to their pre-pandemic levels. A variety of explanations have been advanced, none totally convincing. An examination of the data suggest two other hypotheses which together may help explain why stock values seem out of sync with the underlying economy. 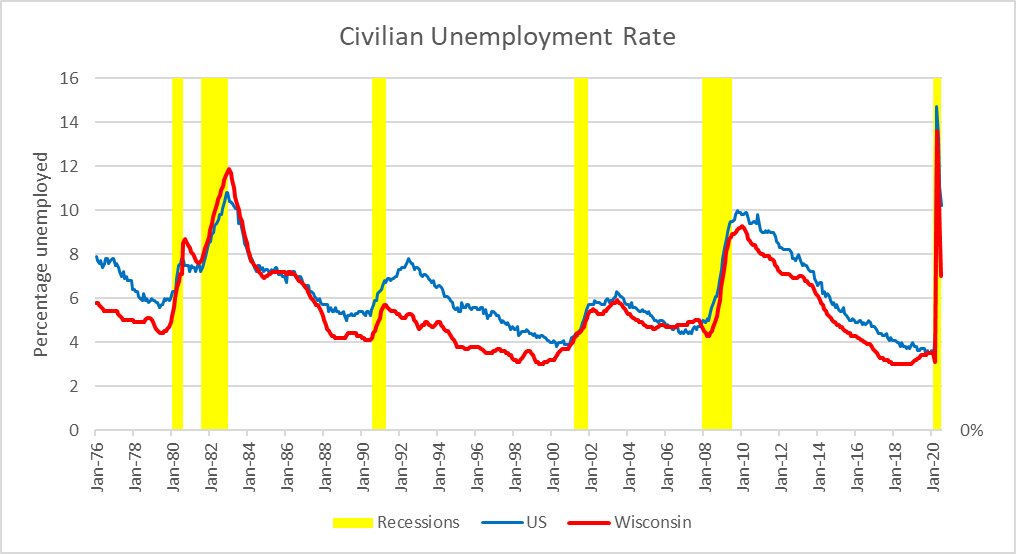 The next four graphs show employment in four major sectors: manufacturing, construction, leisure and hospitality, and retail, based on data from the Bureau of Labor Statistics. It starts in January 2007, shortly before the Great Recession and runs to July of this year. US jobs are shown in red, with the scale (in thousands) on the left. Wisconsin jobs (in thousands) are shown in blue, with the scale on the right.

The first graph below shows the number of manufacturing jobs. Note that the manufacturing sector, even before the pandemic, had not regained the jobs lost in the Great Recession. 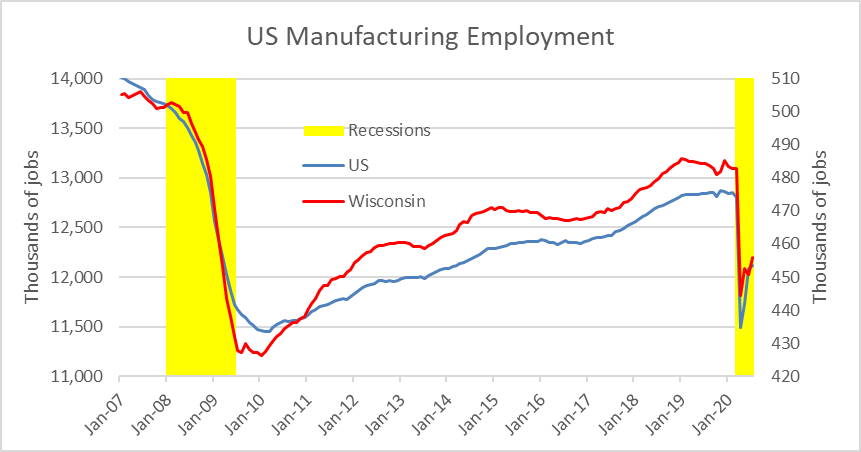 The next graph shows construction jobs. Compared to the other four sectors, the loss was considerably less,

The next graph shows the number of jobs in the leisure and hospitality sector. While this sector lost relatively few jobs to the Great Recession, it was particularly hard hit by the pandemic. 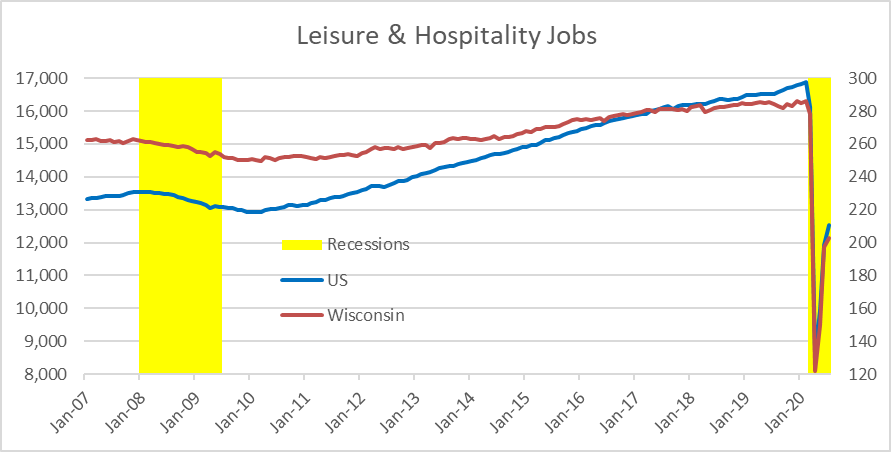 The retail sector was also hard-hit by the pandemic. Even before COVID-19 hit, jobs were declining due to competition from online retailers. 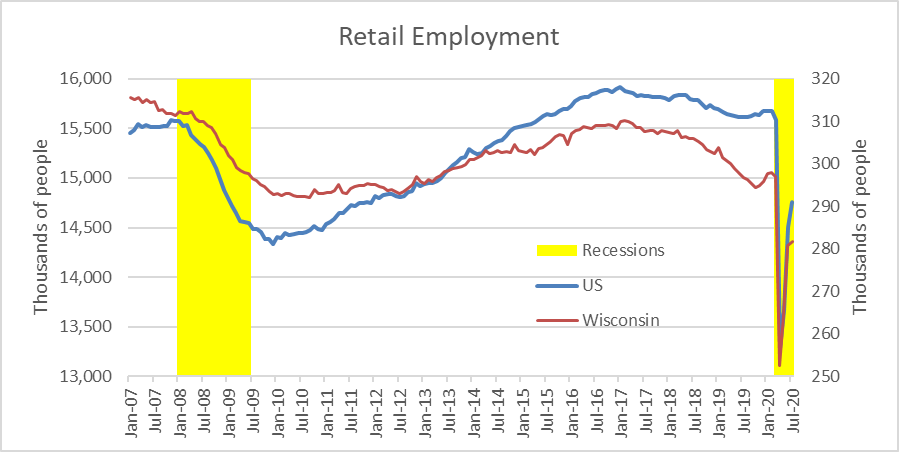 The next graph shows the behavior of the S&P 500 stock index since the start of this year. When the coronavirus hit, the index lost about one-third of its value. Today, however, it is back to its value in February. Why is the stock market rising to record levels even as the economy is worsening? 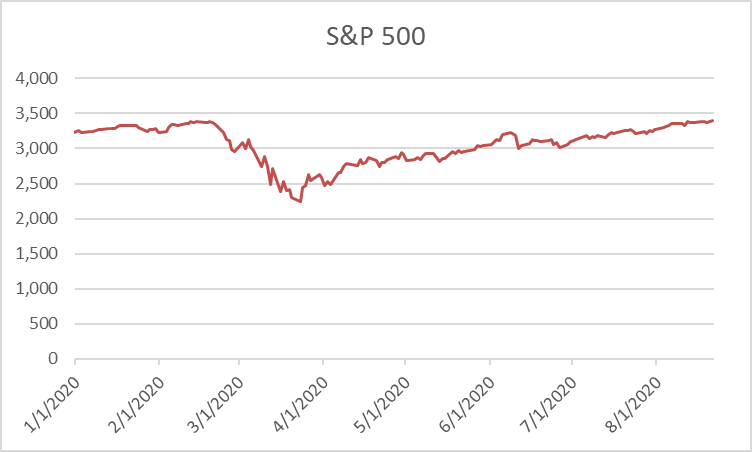 An article in Markets Insider credits the policies of the Federal Reserve. “Over the last several weeks, the central bank has shown it will go to unprecedented lengths to stimulate the economy and prevent further market disruption.”

Get a daily rundown of the top stories on Urban Milwaukee
New York Times’ Paul Krugman points out that the current stock price boom was largely driven by a few very large high tech companies, such as Apple.

Two other factors may also be behind the apparent contradiction between the current recession and the rosy message from the stock market. First, the current economic recession has had strikingly different impacts on various groups of people. 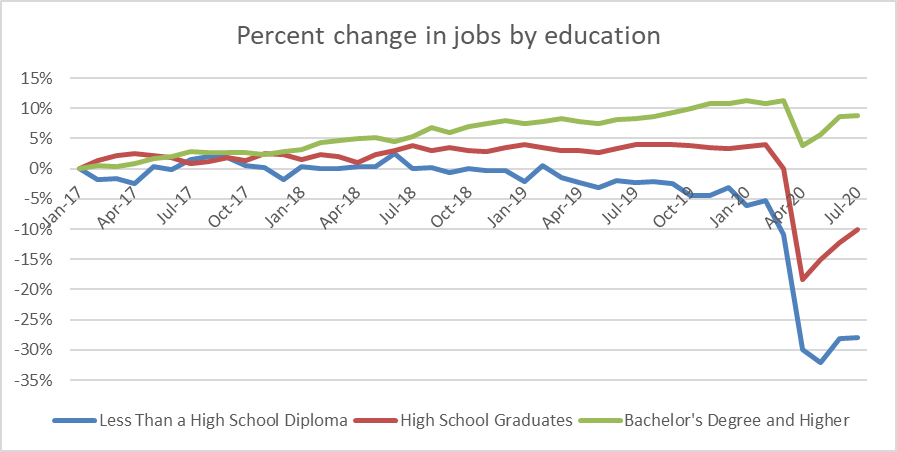 Percent change in jobs by education

Thus, those at the lower end of the education continuum paid a much higher price for the pandemic, not only in sickness and death, but economically. Purchasers of stocks, who tend to be among the nation’s most well-to-do and well-educated people, were by contrast well isolated from the recession, at least so far.

To the extent that the stock market is a rational game, it is won by accurately predicting the future. Part of that future is the November election. This brings up another factor that may be boosting the stock market—the likelihood that President Donald Trump may be defeated by Joe Biden.

Since Trump was elected, the website FiveThirtyEight has published an ongoing average of polls that asked whether voters approved or disapproved of the president. The chart below shows the results over time. The red line shows approval and the blue line disapproval. Subtracting the percentage disapproving of Trump from those approving gives Trump’s net approval percentage. 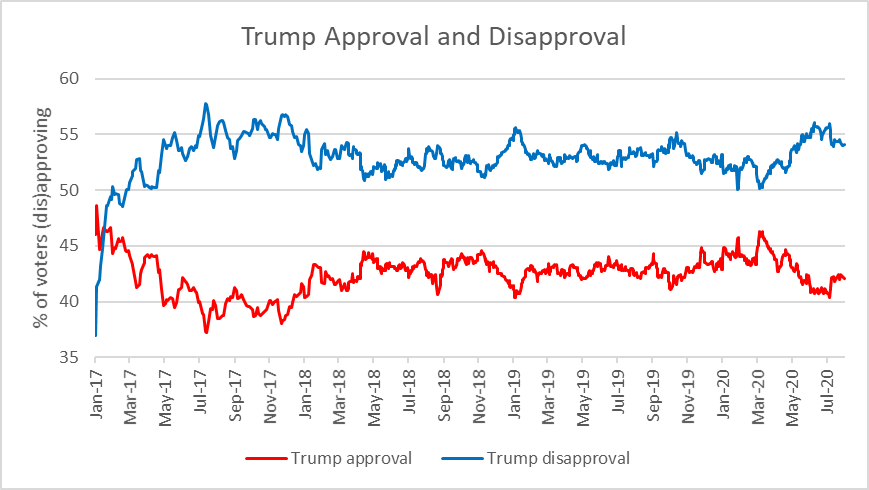 Other than during the first two weeks of Trump’s term, his net approval has been negative, but the gap has narrowed and widened. One narrowing point came in this March, when it appeared that Trump grasped at last the seriousness of the coronavirus. But then it widened as he sabotaged his own administration’s plans to control COVID-19.

The next chart explores that possibility. The horizontal axis shows net approval from March to today. The vertical axis shows the value of the S &P index on the corresponding day. As Trump’s electoral prospects worsen, the stock market seems to react by bidding up the price of stocks. In fact, the coefficient of determination ( R2=.6081 on the chart) says that 61 percent of the variation in the S&P index is explained by the variation of Trump’s net favorability. In other words, there is a correlation between stock market increases and Trump’s worsening prospect for reelection. 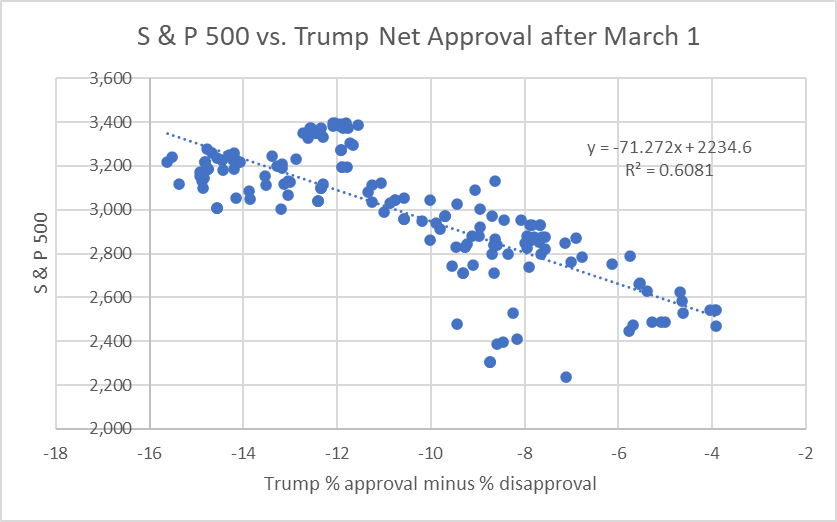 There is one very big caveat to be considered in drawing this conclusion. While the data are consistent with the hypothesis that the market reacts positively when Trump’s prospects get worse, it does not prove cause and effect. Two time series can follow parallel paths for many different reasons.

I suggest that these two additional factors may help explain the current stratospheric stock prices in the midst of an economic meltdown and incompetent leadership. One is that the burden of the economic meltdown is largely placed on people who are unable to participate in the stock market. Thus, the economic pain of the current recession is felt very remotely from the stock market—very different from the Great Recession, when banks and other large institutions were threatened by collapse.

The second factor is that the rising market values may have incorporated the probability that an incompetent leader may not be around for long.

2 thoughts on “Data Wonk: Is The Stock Market Betting on Biden?”