Madison Is Worth More Than Milwaukee

With less than half the residents, Madison property is worth more than $1.5 billion more.

The stark disparity between Madison and Milwaukee is laid bare in the assessed value of the property in each city.

For the third year in a row, the equalized assessed value of all of Madison’s real estate exceeds that of Milwaukee’s, $32.70 billion to $30.69 billion. And the gap between the two cities is growing, even as Milwaukee officials express frustration with assessments.

Much of Madison’s fortune is tied to two organizations that don’t pay property taxes or show up in the assessed value calculation – the University of Wisconsin and the State of Wisconsin. But the economic impact of the organizations is undeniable.

Milwaukee, while it is charting a post-industrial future, owes its fortune to its manufacturing past. That’s evident in the data. Manufacturing properties in Milwaukee, assessed by the state, are valued at $816.72 million while Madison’s are marked at $383.7 million

Commercial properties in the cities are a near draw – $13.49 billion in Milwaukee to $12.41 billion in Madison.

But Madison has a clear and growing lead in residential real estate, $19.56 billion to $16.4 billion. Milwaukee reports $30.18 million in new residential real estate development in the past year, while Madison reports $229.89 million. The gap is even bigger due to reassessing existing properties, Milwaukee’s value went up $10.72 million while Madison’s increased $796.69 million.

While both cities are approximately 100 square miles, over 20 square miles of Madison are underwater compared to one in Milwaukee. Nevertheless, Madison’s land alone is assessed for $7.62 billion while Milwaukee’s is valued at $4.97 billion.

The state, which produces an “equalized value report” for all of the state’s municipalities to ensure tax fairness, includes personal property (commercial fixtures) in each calculation. Milwaukee reports $771.49 million compared to Madison’s $663.17 million. 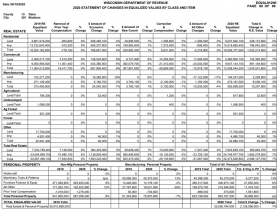 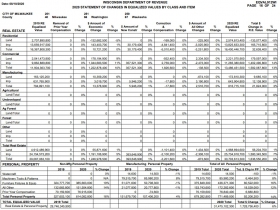 Correction: An earlier version of this article incorrectly stated the income figure for Milwaukee as per household instead of per resident.

Construction is moving right along on a $30 million expansion of the Hmong American Peace Academy in the city’s Lindsay Park neighborhood on the far northwest side.

The charter school, founded in 2004, now has over 950 students. The expansion will expand the footprint of the building currently used for grades sixth through 12. The new 98,000-square-foot, 39-classroom building will serve as the high school while the existing building to which it will be attached will be used as a middle school.

HAPA, as the charter school is known, acquired the 14.5-acre property at 4601 N. 84th St. from Milwaukee Public Schools in 2017 for $2.77 million. It had leased the property previously. MPS previously housed its Samuel Morse Middle School in the 165,000-square-foot building.

The Village of River Hills will purchase 55 mostly undeveloped acres at 1620-1980 W. Brown Deer Rd. to dismiss a Federal Fair Housing lawsuit brought in 2019 by Randle River Hills, LLC, (RRH, LLC.) owner of what is known as “Eder Farm.”

Development of the property was a hotly contested issue in 2017 when Mandel Group proposed construction of 154 luxury apartments in five three-story buildings circled like covered wagons surrounding a campfire. The idea of apartments, luxury or not, was anathema to residents of the village, which for most of its 5.1 square mile area is zoned strictly for single-family housing on five acre lots, as it has been since its incorporation in 1930. The village (population 1,591) is known for housing landlords, not tenants.

As residents continue to struggle to meet payments, the City of Milwaukee is providing an additional $15 million for rental assistance aid through the federal CARES Act.

He said the funds will assist Milwaukee residents who have already applied for WRAP and then be used to help other applicants.

The Social Development Commission, or SDC, previously received $6.7 million to assist residents of Milwaukee, Ozaukee and Washington counties with rental assistance as part of CARES.

One thought on “Plats and Parcels: Madison Is Worth More Than Milwaukee”