One major downtown establish gets an opening date, while others call it quits due to pandemic. 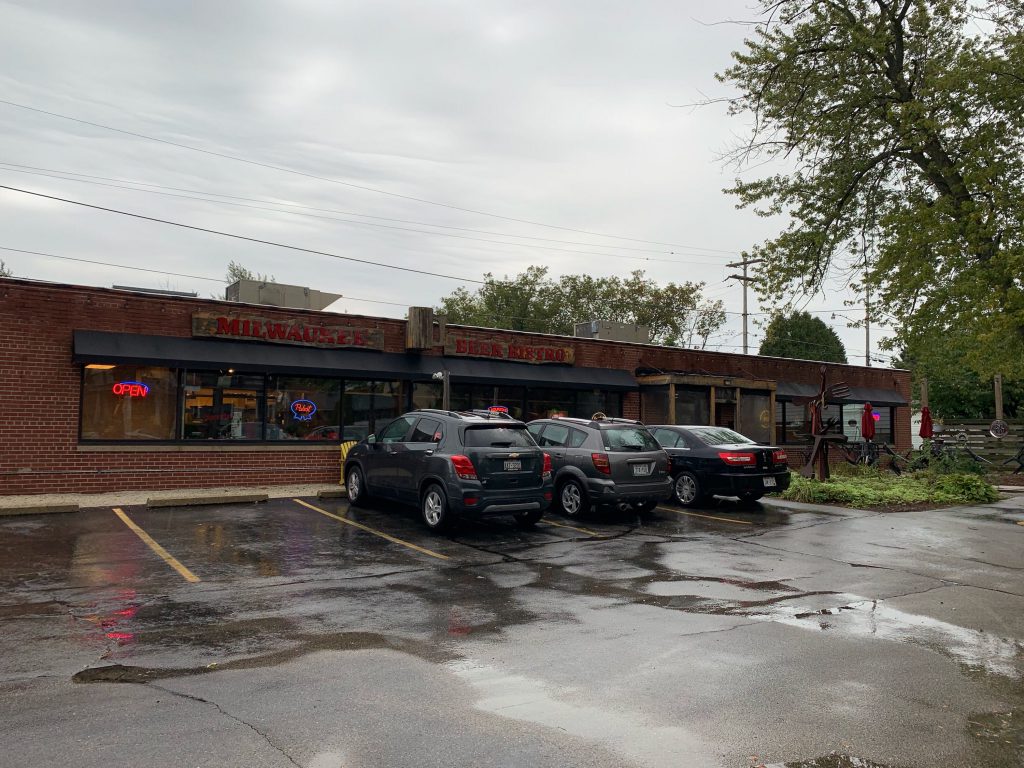 The Milwaukee Beer Bistro at 2730 N. Humboldt Blvd. in 2019 Photo by Alison Peterson.

Donald Lee of Big Daddy’s BBQ and Soul Food, a popular BBQ pop-up, has signed a lease at 2730 N. Humboldt Blvd. The building is the former home of the Milwaukee Beer Bistro, and before that, Rio West Cantina. For now, the restaurant will have two smokers set up outside of the restaurant for the remainder of the summer and fall. Lori Fredrich has the scoop:

He says he’ll also plan to serve regular specials, along with with weekend brunch and special menus for Soul Food Sundays with dishes like smothered pork chops and smothered chicken.

Lee, who has been perfecting the art of barbeque since he was 18 years old, says he’s excited to open another brick and mortar restaurant after serving his food via pop-ups throughout the city for the past couple of years.

Lee says he hopes to open his doors within the next week or two. In fact, if all goes well, customers could be able to indulge in his notable Soul Food Sunday menu as soon as Aug. 16, with a grand opening to follow.

3rd Street Market Hall, which was originally planned to open this spring, then this fall, is now projected to open spring 2021. Construction on the hall was paused due to the pandemic, but is underway once again. Journal Sentinel’s Carol Deptolla reports:

“When COVID hit, we put the brakes on everything to kind of see where the world was going. It was a scary time,” said Omar Shaikh, the Milwaukee restaurateur who’s overseeing the project.

Construction was planned to resume a month ago, Shaikh said, but instead began last week. “We had to make some adjustments” to the layout, he said.

Twelve food vendors are expected to open stalls in the food hall, Shaikh said. The future food hall is at 275 W. Wisconsin Ave., in part of what previously was the Grand Avenue mall.

But five other vendors are “on the fence,” he added. “Their livelihoods are changed” with the economic fallout of the coronavirus pandemic.

The food hall originally was to open with 20 food vendors.

Shaikh said he’s considering adding elements to the hall such as duckpin bowling to make visits more of an experience — “something to do other than eat and leave.”

Back in March, fast-casual pasta restaurant Egg & Flour opened its Bay View location at 2273 S. Howell. Ave. A mere week later, it closed as part of the pandemic shutdown. Months have passed, but Egg & Flour is opening its doors once again. Fredrich reports:

The restaurant looks somewhat different than it did in March, thanks to a more socially distant configuration, complete with vinyl dividers between tables, hand sanitizer for guest’s use and two new patio tables outside to accommodate al fresco dining.

But something that hasn’t changed is the pasta.

Guests will still find the same comfort food filled menu, featuring items like campanelli with pesto ($10), pappardelle with bolognese ($14), shells with cheese sauce, bacon and breadcrumbs ($12), bucatini with cream sauce and Grana Padano cheese ($12) or bucatini with tomato sauce ($11, pictured below with meatballs). Incidentally, guests can also add housemade meatballs to any pasta for just $6.

In addition, temperature checks for employees, strategic scheduling and a paired-down cross-trained staff all contribute to the safety and efficiency of restaurant operations.

Beginning Aug. 10, Egg & Flour will be open Monday through Saturday 11 a.m. to 9 p.m. Carry-out is encouraged.

The Wisconsin State Fair Drive-Thru isn’t the only way to experience the iconic fried foods of one of Milwaukee’s most popular summer events. Several Milwaukee restaurants are currently paying tribute to the State Fair with temporary menu items that would fit right in at a fair booth. Deptolla reports:

Neighborhood Draft at 5921 W. Vliet St. has classics on its State Fair menu from Aug. 5 through Aug. 15.

They include funnel cake with powdered sugar and blueberry maple syrup; design-your-own baked potato; Rupena’s Hungarian sandwich, a quarter-pound of ground pork with the butcher shop’s sour cream; boneless wings and waffles on sticks; and lemonade, which can be doctored with vodka.

And Nino’s Italian Bakery in Menomonee Falls has traditional and flavored cream puffs in lemon, strawberry and cookies and cream until Aug. 14.

Pizza de Brazil, a new pizza restaurant specializing in traditional rodizio style pizza has softly opened for business at 130 W. Layton Ave. in a space formerly occupied by a Perkins near the airport. Fredrich reports:

The dough is made with a combination of rice and wheat flours, which are cold fermented before being baked in a Woodstone oven.

Their composition results in a crisp, almost pastry-like crust that contains between 70-80% less gluten than an ordinary pizza dough.

The style of service is similar to the all-you-can-eat model found at a Brazilian churrascaria (steakhouse). Guests are first seated at a table by the host and offered a service card, which they use to signal waitstaff to bring food to their table.

In addition to regular dining room seating, Pizza de Brazil also has a private dining room which is available for private rodizio-style parties for up to 32 guests.

AJ Bombers and Smoke Shack Express, two restaurants that have been in business at the Mayfair Collection for four years now, have permanently closed their doors due to business slow down during the pandemic. The BizTimes’ Maredithe Meyer reports:

“We’ve had to make tough, strategic decisions to protect our businesses as best we can during these unprecedented times,” said vice president of operations Chris Adams in a statement. “And during these changes, the well-being of our Mayfair Collection team was a top priority.”

The group shut down its entire footprint for six weeks at the onset of the COVID-19 outbreak, in an effort to keep its employees and diners safe, it said at the time. Its four downtown full-service concepts began reopening for curbside and delivery service in late April, and for dine-in service in June.

The fast-casual Mexican restaurant The Angry Taco, located at 753 N. Water St., quietly closed its doors for good with no official statement. Robert Montemayor, owner of The Angry Taco as well as Monterrey Market, hinted at its eventual closure while speaking to Urban Milwaukee about a second Monterrey Market location he was in the process of opening in June.

The restaurant has been emptied of its contents.

In a heartfelt Facebook post, the owners of Wooden Goose Cafe (1556 W. Mequon Rd.) have announced that after 30 years of business, they would be closing the Wooden Goose Cafe. The post cites COVID-19 as a major cause of the closure, explaining that outdoor dining wasn’t an option at the restaurant’s location. The restaurant is listed on bizbuysell.com for $150,000. The owners plan on leaving the restaurant industry after 42 years, retiring and “moving on to the next chapter” in their lives.