How Will Schools Use CARES Funding?

The pandemic is proving very expensive for schools.

By Madeline Fox, Wisconsin Public Radio - Aug 3rd, 2020 01:53 pm
Get a daily rundown of the top stories on Urban Milwaukee

More than $321,000 to print emergency curriculum materials and booklets; $142,000 for hand sanitizer; nearly $28,000 for Wi-Fi hotspots; a $2 million contract for disposable masks in child and adult sizes; a $1.2 million dollar contract for yet more hotspots.

Those are just some of the early costs Milwaukee Public Schools have incurred as they’ve scrambled to keep children learning, and employees and students safe, in the midst of a global pandemic.

“We obviously have costs that are higher than usual, because we’re doing things that are highly unusual in the interest of safety,” MPS Legislative Policy Manager Chris Thiel told school board members at a July meeting.

The numbers vary from district to district and at non-district schools across the state, but across the board, COVID-19 is proving expensive for Wisconsin schools, even before most have been able to welcome students back into their buildings. To help pay for those costs at a time when their usual revenue sources may be in jeopardy, schools are relying on billions of dollars in federal relief funds — although which schools will get what is a matter of dispute.

Relief Funding Prompts A Debate: How Much Should Private Schools Get?

When Congress passed the coronavirus relief package known as the CARES Act in March, it set aside two buckets of federal funding for schools to be distributed by each state.

The Elementary and Secondary School Emergency Relief, or ESSER, funds include $158 million for Wisconsin’s 421 school districts and 21 charter schools, and are to be distributed by the Department of Public Instruction. The minimum distribution, allotted to 69 schools or districts, was $40,000, while Milwaukee Public Schools marked the high end of the spectrum, at nearly $56 million — though about $15 million of that is slated to go to the city’s private schools.

There’s been some dispute between the Department of Education, the states, and public and private schools about how much of the CARES Act funds should go to private schools, as the Department of Education used a different structure than the usual Title I formula, which is based on how many low-income students are served. A lawsuit over how much of the money should be shared with those schools is still in progress.

Private schools would get about $4 million more in ESSER funds with the new structure than they would through the Title I formula, but Dan Rossmiller, legislative director for the Wisconsin Association of School Boards, said it’s more about the principle of getting more money to low-income kids.

“(At the) end of the day, public and private schools have been cooperating in the past about how this money is used, they’ll have to cooperate in the future about how Title I funds are used, and the CARES Act dispute has created a blip,” he said. “It’ll get resolved one way or another, but it’s unfortunate that it delayed release of the funds and it’s unfortunate that it, in some respects, inflamed tensions between public and private schools that needn’t necessarily exist.”

Meanwhile, groups such as the conservative Wisconsin Institute for Law and Liberty argue, like the Department of Education, that funds should go to schools — including private and charter schools — based on their total student population, not just on the number of students eligible for Title I assistance.

“We think that given that this crisis has affected schools across all sectors, whether you’re a private school, a public school, a charter school, that that money should be equitably distributed,” Will Flanders, research director of the Wisconsin Institute for Law and Liberty, told “The Morning Show” on Friday.

The second federal allocation is the Governor’s Emergency Education Relief fund, which consists of about $46.6 million to be distributed to schools identified to have the highest need. The potential recipients were chosen based on economic disadvantage, access to technology, and scores on the English Language Arts Assessment. The governor announced last week that 152 districts and charter schools, as well as the state’s three tribal districts, will be eligible for those dollars. 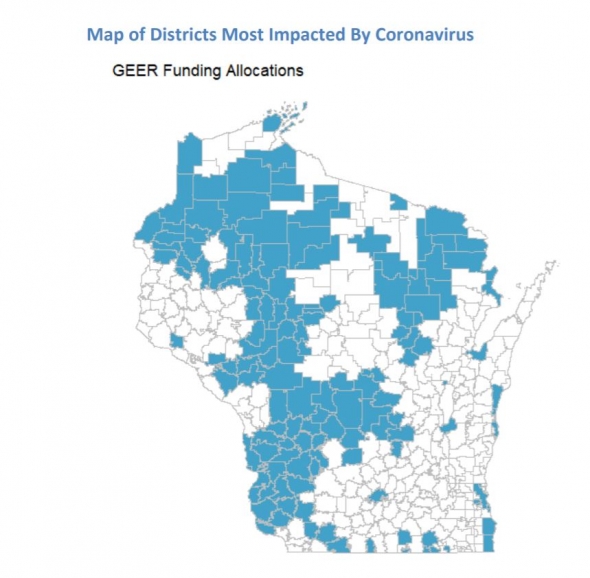 Above, a maps highlights the school districts that will receive GEER funding. Source: Office of the Governor

Separately, the CARES Act also set aside an extra $8.8 billion for child nutrition programs, and temporarily removed some requirements to make them more flexible. That’s helped schools as they scramble to provide children with the meals they’d usually be getting in school as part of the free and reduced lunch program.

Private and charter schools, meanwhile, have access to other CARES Act funding that’s not available to public school districts. Based on a WPR analysis, at least 114 elementary or secondary schools received loans of at least $150,000 from the Paycheck Protection Program, a loan program to incentivize small businesses to keep workers on the payroll that can be forgiven if retention criteria are met.

The federal government only released the names of businesses receiving more than $150,000, and only supplied a range for how much those businesses were awarded, not the exact amount, so it’s hard to know the total dollar amount in PPP funding that made its way to schools. The PPP awardee schools whose names were released included 92 private religious schools, 13 non-affiliated private schools and nine charter schools.

Seven of the schools received the maximum amount, between $2 million and $5 million, including Seton Catholic Schools in the Milwaukee area and Green Bay Area Catholic Education. Another 14 received between $1 and $2 million, including Regis Catholic Schools in Eau Claire and The Prairie School in Wind Point. The vast majority got less than $1 million. Some other school-related programs, including school bus companies and a program to bring archery to schools, also received PPP loans, as did many preschool and childcare providers, including some that operate 4K and kindergarten programs.

The data analysis does not account for Wisconsin schools that could have applied using an out-of-state address — for example, educational institutions that operate in multiple states.

Communities And Nonprofits Chip In

Schools and districts, both public and private, have also gotten donations from the community that have helped offset cleaning costs and structural changes. Milwaukee Public Schools, for example, got several grants to install water bottle filling stations, which many schools are working to install in place of bubblers to keep kids hydrated without spreading germs.

There are also more formalized grant programs, like City Forward’s initiative to help Milwaukee schools develop COVID-conscious reopening plans. The education nonprofit awarded 14 schools grants ranging from $15,000 to $30,000 to help develop virtual, in-person and hybrid return plans. All the awardees were private or charter schools, which City Forward communications director Isral DeBruin said is due to the nature of the grants: They were intended for schools developing their own independent plans, while MPS schools are all following one plan at the district level.

He said across the board, though, what City Forward heard from schools was that they needed money more rapidly, and without too many strings attached.

Meanwhile, school districts across Wisconsin and around the country are bracing for a second wave of financial strain — this one not on the costs and spending side, but the income side.

The COVID-19 pandemic has hit state budgets hard, though the full impact is still to be seen. And as the largest portion of the state budget, it’s unlikely school funding will make it out unscathed. School districts may also lose out on funding they typically get through property taxes, given the likelihood some families won’t be able to pay their tax bill this year.

There are, as ever, other grants and funding opportunities. The Rural Tech Project, from the U.S. Department of Education, is offering $600,000 challenge grants to schools and local education agencies to advance technology education in high schools.

Additional federal funding is also in the works, as Congress considers a second major relief bill to follow the CARES Act. Thiel, of MPS, said he expects that to be at least a couple weeks away, as the House of Representatives and Senate continue work on separate bills that will need to be reconciled. The Senate is also looking to tie some funds to schools reopening with in-person classes.

“Given the extraordinary costs of operating in this moment, the federal funds to date have not been sufficient to make up for any hole that we’re seeing,” Thiel told the board, “and at least in the Senate package, there aren’t sufficient funds coming into the states that will bolster the state budget — and we’re obviously reliant on those state budgets being healthy to fund K-12 public education.”

The CARES Act Allocated Funding For Schools. Who’s Getting It, And How? was originally published by Wisconsin Public Radio.