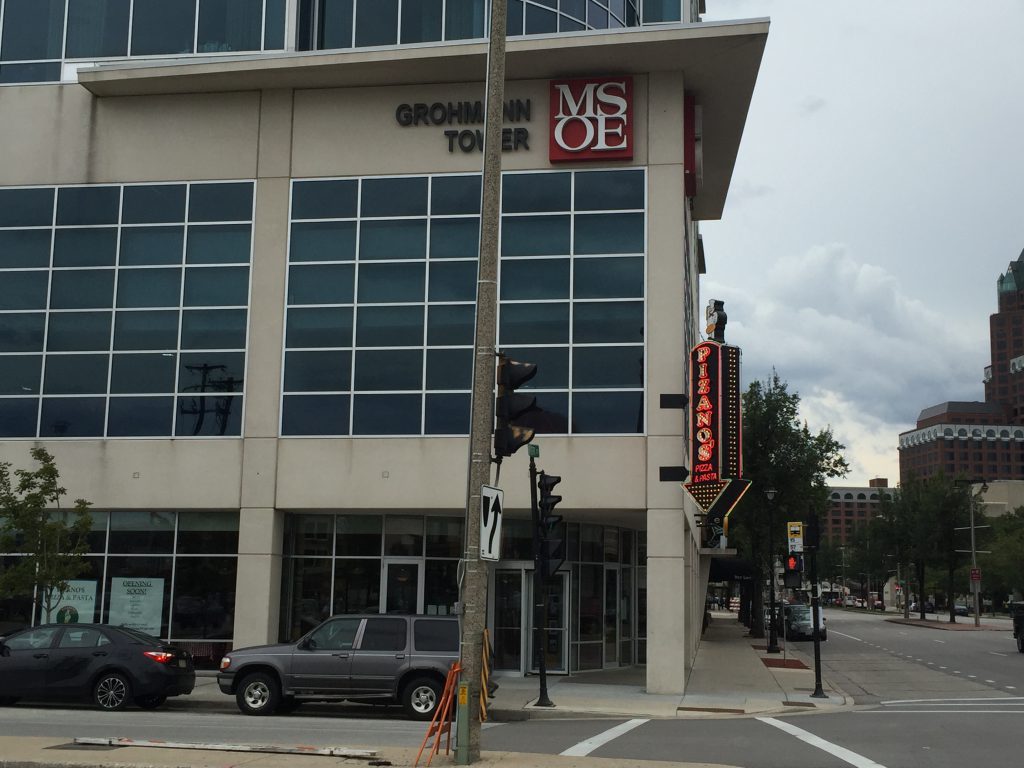 As customers approach the venue, their eyes will likely be drawn first to the restaurant’s dulcet sidewalk patio – a longtime summer tradition at Centro – which has been enhanced by a set of new slatted four-top tables.

Guests also have the opportunity to experience a brand new patio space located just behind the building. It’s an area that has been utterly transformed. What once was a ragged gravel-covered space is now the scene of a beautifully terraced back patio that welcomes guests with all of the charms of a secret garden.

Reservations are recommended for patio seating, although walk-ups will be accommodated on a first-come-first-served basis.

The new restaurant is owned by brothers Anthony and James Roufus who initially proposed a venue called Hot Box Burgers for the former Hybrid Cafe just off of Brady Street. Fortunately, even as plans for Hot Box fell through, the brothers were able to bring their dream to fruition in the form of Betty’s Burgers & Custard.

“Buttered” burgers are the restaurant’s mainstay, available in single, double or triple form ($5.55, $7.65 or $9.75), topped to order with “the works” (ketchup, mustard, fried onions) or a slew of additional toppings.

Sausages, including polish, hot hungarian and brats sourced from the Foltz Family Market, are also a feature, priced at $6 each. There’s also a selection of sandwiches …

Custard comes in the form of cones, dishes, Sundaes and dipped cones (priced $2.75 to $5.25). In the coming months, the venue will also offer shakes and malts, as soon as the restaurant is able to install the necessary equipment.

Opening hours for Betty’s are Wednesday and Thursday from 2 to 10 p.m., Friday and Saturday from 2 p.m. to midnight and Sunday from 2 to 8 p.m.

The North Avenue Market, a food hall and community space planned for 5900 W. North Ave., will offer a wide variety of services including coffee, retail experiences, outdoor dining a drive-thru and more starting sometime in the spring of 2021. Fredrich reports:

“The cornerstone of the space will be the coffee shop and bar,” (founder William “Chris” Harris-Wimsatt) says. “But from there, we’re seeking diversity. We’re also seeking vendors who believe in our mission, who thrive on collaboration and who really want to be part of a community that works together.”

Harris-Wimsatt says he’ll be looking for a variety of vendors for the main floor of the hall, which will also include a bar and coffee shop. Options might include a vegetarian or vegan concept, global eats (sushi, empanadas, curry, street corn), comfort food (BBQ or fried chicken), lighter fare (soup, salad) or deli style sandwich offerings.

Meanwhile, garden level vendors will include up to five dessert vendors, serving items like cupcakes, custard, chocolates or popcorn; a studio space; a variety of retail tenants (from books and apparel to spices and jewelry) and potentially a vendor offering massage or various therapies. Additional food options could include a produce vendor, a street food-style vendor, a meat or cheese shop or a wine bar.

Interested vendors who share Harris-Wimsatt’s vision and would like more information, a tour of the space and detailed plans are encouraged to reach out to him via email at chrish@northavemkt.com.

An application filed with the City of Milwaukee shows that a new Mexican restaurant is planning on opening in Bay View on August 1. It hasn’t opened yet, the permit filed is just an estimate, but work is underway on the property. Ventura’s Tacos, which would open at 2899 S. Kinnickinnic Ave., will be operated by Jorge Ventura Ramirez, who also co-owns Las 7 Estrellas restaurant located at 112 E. Dakota St, and his family. Urban Milwaukee’s own Graham Kilmer has the scoop:

The owners first filed plans for the restaurant with the city in the spring, around the time that COVID-19 was taking off. At the time, they told Urban Milwaukee the building needed some repairs, and the space needed to be built out.

The little restaurant has capacity for approximately 30 patrons, according to a business application filed with the city. And it will serve a host of Mexican dishes.

A look at their menu shows the restaurant will serve all the classics of a taqueria: tacos, burritos, sopes, quesadillas and chimichangas. It will also serve such dishes as chiles rellenos, pernil Asado, camarones and enchiladas.

Fiddleheads, a small-batch coffee roaster based out of Thiensville, has decided to permanently close its Bayshore mall location at 5600 N. Bayshore Dr. and will instead focus on opening a new cafe in Shorewood, as well as another location in the new BMO Tower downtown. The Bayshore cafe originally shut down temporarily as part of the pandemic lockdown. According to a Journal Sentinel article written by Carol Deptolla, the Shorewood cafe will open sometime around November 1 in the former Sherwin-Williams paint store located at 4334 N. Oakland Ave. and the downtown location plans to open sometime in December.

Co-owner Becky Cooper Clancy says Bounce has not had a single case reported, but feels it is in the best interest of their employees and the community to cease service.

Aug. 2 will be Bounce’s last day of operation for a while and 100 percent of all food sales will go directly to the six remaining employees. The full menu will be available for pick-up or delivery.

The menu includes a variety of pizzas like the Loaded Tot … and The Milverine topped with sausage, pepperoni, bacon and chicken breast. Bounce also offers salads, quesadillas, specialty tots and more.

The furniture and numerous celebrity photos have already been removed from the restaurant.

The location was in development longer than it was open. The Milwaukee School of Engineering and Pizano’s owner Rudy Malnati Jr. announced in November 2015 that the restaurant would take up the 8,500-square-foot space, seating more than 200 people.

It was due to open in spring 2016 but opened just shy of three years after it was announced, in October 2018.

Bella Caffe, a Historic Third Ward coffee joint located at 189 N. Milwaukee St. that offered baked oatmeal and other desserts, has announced via Facebook that it will remain permanently closed. The cafe originally temporarily closed in March as part of the pandemic shutdown. In the Facebook post, owners Jim Nowlen and Rich Witkowski write that after 20 years of business, the restaurant has made the difficult decision to close for good. The post goes on to explain that originally, the owners were hoping to reopen June 1. Tables, chairs and other furniture and Bella Caffe memorabilia are being sold off by the owners.

Fuddruckers, a fast-casual burger chain based out of Texas, has closed its Brookfield location at 16065 W. Bluemound Rd. The Brookfield location was the last remaining Fuddruckers location in Wisconsin. Fuddruckers operated similar to a buffet — customers ordered their burgers, then built the toppings themselves. The system didn’t translate well to operating within a pandemic, evidenced by the fact that all Fuddruckers restaurants recently closed their buffet lines.