Evers Should Re-Order All Restrictions

Not just a mask mandate. Put the Supreme Court on the hot seat.

Can Governor Tony Evers legally issue a revised order aimed at controlling the spread of COVID-19? Evers has said no, that the state Supreme Court’s May 13 decision tied his hands, but now he has issued a mask mandate. That’s a good start, but I think he can do more. He has been unnecessarily passive, and his passivity comes at a heavy cost to this state.

Since the Wisconsin Supreme Court stated that Health Services Secretary-Designee Andrea “Palm’s Emergency Order 28 is declared unlawful, invalid, and unenforceable”, new COVID-19 infections per 100,000 residents have grown substantially in Wisconsin–from six to more than seventeen. This still puts Wisconsin well below Florida and Louisiana (50 new cases per 100,000 residents) and other states. However, in these other states, the governors do have the power to do something about it.

Justice Pat Roggensack, the author of Wisconsin Legislature v. Palm, seems to have taken a deep dislike to Palm. The first line of her decision says “This case is about the assertion of power by one unelected official, Andrea Palm, and her order to all people within Wisconsin to remain in their homes, not to travel and to close all businesses that she declares are not ‘essential’ in Emergency Order 28.”

Her opinion is shot through with this animus: “If we were to read the definition of ‘Rule’ as Palm suggests, one person, Palm, an unelected official, could create law applicable to all people during the course of COVID-19 and subject people to imprisonment when they disobeyed her order. Rulemaking exists precisely to ensure that kind of controlling, subjective judgment asserted by one unelected official, Palm, is not imposed in Wisconsin.”

Partisan considerations also seem to enter in. At the time the decision was issued, President Donald Trump was attacking Democratic governors for not opening quickly enough. Following the ruling, President Trump tweeted that the ruling was a “win” for the state. “The people want to get on with their lives. The place is bustling!”

A third factor animating Roggensack seems to be suspicion of expertise, as illustrated by her repeated use of “unelected” in front of “Palm.” Like all cabinet secretaries Palm is appointed, not elected, she was appointed by Gov. Evers, who was elected. It is hard to imagine her proceeding without his approval. Moreover, Wisconsin law gives her broad responsibility for responding to infectious diseases.

Roggensack’s 4-3 decision depends on a deliberate misreading of Wisconsin law to arrive at a predetermined conclusion. Section 252 of the Wisconsin statutes deals with infectious diseases. Paragraph 252.02(4) says that the Department of Health and Human Services:

may promulgate and enforce rules or issue orders for guarding against the introduction of any communicable disease into the state, for the control and suppression of communicable diseases, for the quarantine and disinfection of persons, localities and things infected or suspected of being infected by a communicable disease … Any rule or order may be made applicable to the whole or any specified part of the state … The department may issue orders for any city, village or county by service upon the local health officer. Rules that are promulgated and orders that are issued under this subsection supersede conflicting or less stringent local regulations, orders or ordinances.

Paragraph 252.02(6) adds that “The department may authorize and implement all emergency measures necessary to control communicable diseases.”

Any person who willfully violates or obstructs the execution of any state statute or rule, county, city or village ordinance or departmental order under this chapter and relating to the public health, for which no other penalty is prescribed, shall be imprisoned for not more than 30 days or fined not more than $500 or both.

Nowhere in Section 252 is there any mention of the state Legislature in general or of a legislative role in approving departmental rules or orders. This seems like a deliberate omission by the statute’s drafters, reflecting an intention to leave fighting disease to the experts and taking it out of politics. Given the example of the Trump administration and its difficulties in controlling the coronavirus, that decision seems a wise one.

However, Roggensack is not satisfied with the plain words in section 252. Instead she implicitly rewrites the law by incorporating section 227.24 which deals with emergency rules in general. In doing so, she ignores the well-established principle that if two provisions of law are in conflict, the one that is most specific in its focus—communicable diseases–takes precedence over the more general—emergencies of any type.

In his dissent, Justice Brian Hagedorn examines the issue of rules versus orders in considerable detail. He concludes that Emergency Order 28 is not a rule because it is not designed to be permanent. Instead, it is tied to the continued presence of COVID-19.

The Supreme Court’s decision is not solely to blame for surging COVID-19 infections and the resulting deaths, which are just now starting to show up. The justices were all under the impression that the legislative leaders intended to negotiate a replacement order. But the court majority clearly shares a major part of the blame.

In concluding his dissent, Justice Hagedorn writes, “Today’s decision may or may not be good policy, but it is not grounded in the law.” Today it is clear that the decision was very bad policy. The chart below shows the recent number of new daily cases in several wealthy countries worldwide, as well as in Wisconsin and two of its counties., Although many other countries went through a rough spell last spring, today most are succeeding in controlling COVID-19. Reading the Wisconsin Supreme Court’s decision, one can see why the United States is an outlier, failing at this fundamental task of government—to protect the health of the public. Although Wisconsin is not the worst state, its record is bad. Clearly more is needed to stop transmission of the virus. (National figures are from the World Health Organization; counties from the New York Times database.) 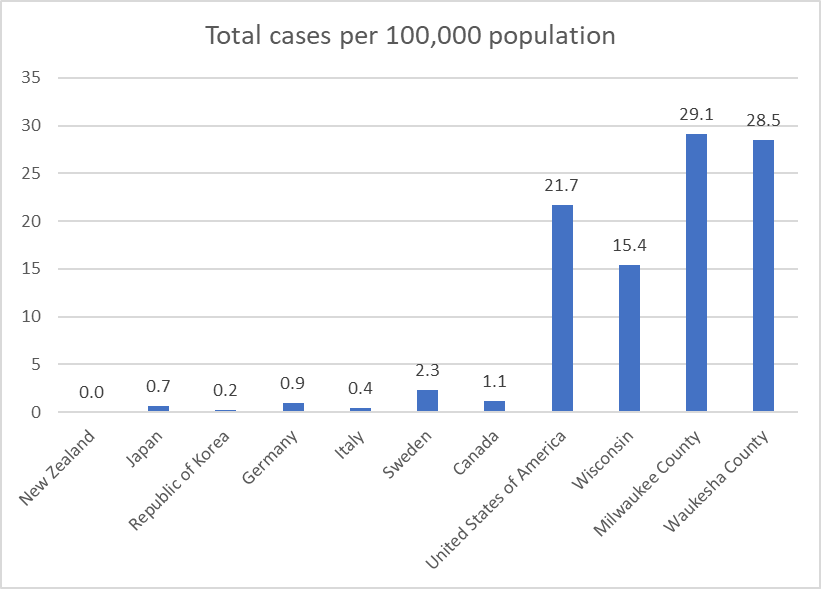 Governor Evers decision to issue a mask mandate is a good start, but more is needed. I think he and Secretary Palm should issue an updated version of Order 28.

Evers will probably be sued either way, for issuing the mask mandate or for reissuing Order 28, so why not do both? Both rely on the state statutory power. Even if the terrible results of the Supreme Court’s previous decision does not cause some rethinking among the members — and it certainly should — the replacement of Daniel Kelly, one of the two most ideological members on the previous court, by liberal Justice Jill Karofsky seems likely to change the vote count.

Evers needs to be a leader. The health of his state, of all his constituents, depends on his courage. History will remember the decision he makes.

3 thoughts on “Data Wonk: Evers Should Re-Order All Restrictions”