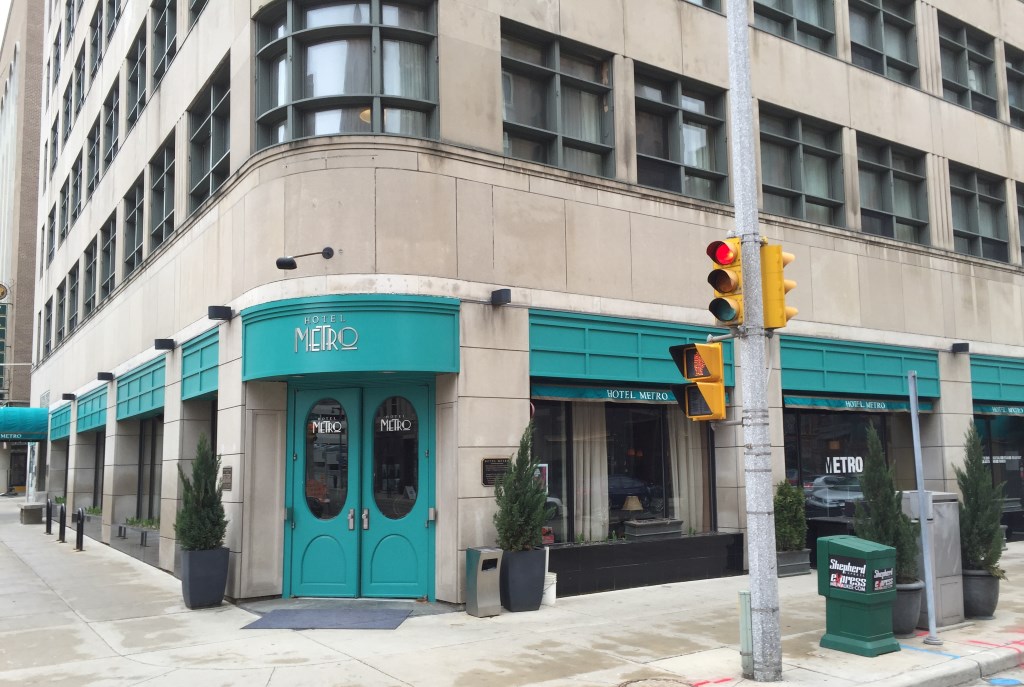 Oggie’s will open in Hotel Metro.

A new restaurant led by Thomas Hauck, the previous chef-owner of the now-closed c.1880, is set to open in the newly revamped Hotel Metro on August 4. The restaurant is described by Hauck as a European restaurant with a hint of “Midwestern charm.” The Journal Sentinel’s Carol Deptolla reports:

The dining room at 411 E. Mason St. is freshly renovated, along with the entire hotel.

…dishes Hauck has planned for the dinner menu include roast duck breast with confit duck leg meat, charred cabbage, an assortment of summer beans, cherries, pistachios and cherry duck jus, as well as classics such as mussels and frites (with leeks, shallots, dragon carrots and vadouvan seasoning), and steak tartare…

Oggie’s will be open for lunch and dinner, starting at 5 p.m. Aug. 4 and at 11:30 a.m. for lunch Aug. 5. It will serve its lounge menu between 2 and 5 p.m. Reservations can be made starting July 29 through OpenTable online or by calling the hotel.

Mike Holz, executive chef at the Brunch restaurant’s downtown and Brookfield locations, has plans to open a late-night taco joint. Deptolla has the scoop from Holz:

The location, at 1001 N. Old World Third St. at West State Street, might not have been available otherwise, he said, considering it’s near Fiserv Forum and on a popular street for nightlife.

He hopes to also sell tacos late at night, along with beer, frozen Margaritas and Mexican sodas.

Taco Mike’s would have 10 or so varieties on soft corn tortillas, Holz said; a preliminary menu includes a breakfast taco, vegan taco with cauliflower and peppers, and shrimp, in addition to shredded pork, beef and others.

Freshfin Poke officially opened the doors to its new East Tosa location (6927 W. North Ave.) on July 22. The new location comes with the classics that customers have come to love from the rapidly-expanding Freshfin Poke brand, but also with some new menu items. OnMilwaukee’s Lori Fredrich has more details:

In the coming weeks, customers at all locations can look forward to two additional options for their poke bowl base: quinoa and shredded kale, along with standards like white or brown rice and mixed greens.

To start, the restaurant will be open for carry-out. Orders can be placed online, by phone or through the relatively new Freshfin app, which is available for both IOS and Android.

Dia Cafe and Noche Restaurante (“dia” translating to “day” and “noche” translating to “night”) is the name of planned cafe and restaurant featuring Latin American dining to be located in Greendale and housed in the same building. Fredrich reports:

Mike Drilling of the Drilling Restaurant Group, who also operates Panther Pub & Eatery, 5651 Broad St., is behind the new project, which is slated for opening in September at 6601 Northway, a former office building just a block North of the pub.

Dia y Noche … includes a cafe and bakery along with a full-service restaurant that will serve dishes from Central America, South America and the Caribbean.

“The goal,” says Drilling, “is to deliver on not only the food, but on the service and the experience.”

The menu will feature both entrees and small plates which will change out quarterly and showcase dishes from a rotating cast of locales in South America, Central America and the Caribbean.

Drilling has hired an executive chef from El Salvador and a sous chef from the Dominican Republic who will take the lead in designing dishes.

Back in March, we reported that the Chicago-based deep dish pizza chain Lou Malnati’s Pizzeria had announced its plans to open a location in Brookfield square. Now, an opening has been announced, as the Biztimes’ Maredithe Meyer reports:

Chicago-based deep dish pizza chain Lou Malnati’s Pizzeria is gearing up to open its second Milwaukee-area location in less than a year.

The new full-service restaurant is slated to open Aug. 3 at 15795 W. Bluemound Road in Brookfield, which is the former Stir Crazy restaurant building at Brookfield Square, according to a news release.

It will initially limit service to curbside to-go, contactless delivery and drop-off catering, but dine-in service is expected to begin in early September.

Slim McGinn’s last day as an Irish pub is Aug. 16. It will reopen under Bob Meuler as Bobby’s Bar: Great Place Good Times later that week with some of the same staff.

“I want to thank them (customers) for all of their patronage, all the good times we’ve had,” McGinn said.

(Meuler) plans to turn Slim McGinn’s into a “children’s charity bar,” in which 5% of daily sales will be donated to an organization that helps kids. Meuler is the youngest of 12 children.

Bobby’s Bar will serve a scaled down version of Slim McGinn’s menu at first, then will gradually incorporate new items and specials. In the future, Meuler plans to serve breakfast on the weekends.

Marcus Hotels & Resorts is planning to begin reopening businesses on the ground floor of Saint Kate — the arts-themed hotel located downtown at 139 E. Kilbourn Ave. Among those reopening is its Proof Pizza restaurant, a fast-casual Neapolitan-style pizza spot. The restaurant will reopen on July 31, and will host live music performances on Fridays and Saturdays.

According the Biztimes, a former Perkins Restaurant & Baker located in Oak Creek at 2010 W. College Ave. has been purchased by a private out-of-state buyer with plans to open a new restaurant in the space. Meyer writes:

Destan Aliu of Ottumwa, Iowa purchased the property, at 2010 W. Ryan Road, for $600,000, according to state property records. The seller is listed as Mark Maguire of Oceanside, California.

Aliu plans to open a “diner-style restaurant” in the coming months, according to a news release from Milwaukee-based commercial real estate firm The Barry Company.

The Walker’s Point fine-dining restaurant Meraki, which has made several “Top Restaurants” lists, will close on August 8 due to the pandemic. Deptolla reports:

“Unfortunately, we do not have the ability to offer outdoor dining and understand that guests are very reluctant to dine in at this time,” the restaurant said in an email to customers and in social media posts. It added, “We will be monitoring the COVID situation to determine when we may be able to reopen safely for both our staff and our guests.”

Chef-owner Chad Meier said Wednesday he’s calling the closure temporary, but he doesn’t foresee when the restaurant might reopen, and he plans to find work outside the restaurant industry in the meantime.

He owns the building in which Meraki is located, at 939 S. Second St., which gives him the flexibility to reopen the restaurant there.

The restaurant will be open for its regular hours through Aug. 8 — taking orders for curbside pickup from 3 to 7 p.m. Tuesdays through Saturdays, and seating diners starting at 5 p.m. those days, by reservation only. Bottles of wine and batched craft cocktails to go will be discounted to help move the restaurant’s inventory.