New report shows the state may have to cut revenue sent to local governments.

By Rob Mentzer, Wisconsin Public Radio - Jul 23rd, 2020 02:41 pm
Get a daily rundown of the top stories on Urban Milwaukee 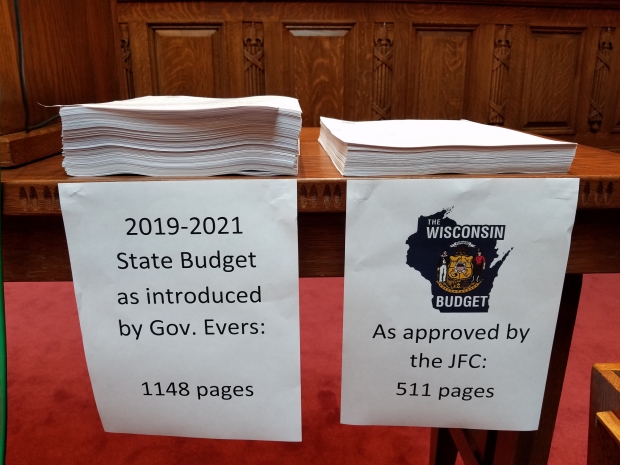 Republicans stacked a paper copy of Gov. Tony Evers’ budget bill next to their own on the day the Wisconsin Assembly passed its version of a two-year spending plan. The GOP budget bill is the shortest in decades. Shawn Johnson/WPR

That’s one finding of a new report from the Wisconsin Policy Forum on government spending trends between 1997 and 2017. Now, as the effects of the COVID-19 pandemic are putting increased pressure on government budgets at all levels, it’s Wisconsin’s K-12 schools that could bear the brunt of future budget cuts.

The state budget pays for Wisconsin’s BadgerCare program, a health insurance program for low-income Wisconsinites and some special-needs groups, as well as for state prisons, the University of Wisconsin System and state highways. Local governments pay for K-12 schools, police and fire departments and local roads.

The state provides aid to local governments to help them pay for those services. But the report finds that the share of state spending that goes to that aid declined markedly, from 38.4 percent of the state budget in 1997 to 26.6 percent in 2017.

The data in the report predates the COVID-19 pandemic, but the report notes that without new relief spending by the federal government, the effects of the pandemic on state and local governments are likely to be dramatic.

“Absent additional federal aid, lawmakers and Gov. Tony Evers will likely have to consider spending cuts that may extend to aid to schools and local governments,” the report finds.

“When we’re talking about local governments that benefit from shared revenue, K-12 schools are really going to be where that’s felt in the most real way,” Brown said.

Budget cuts have already begun, as federal lawmakers debate further economic relief measures to respond to the pandemic. On Wednesday, Gov. Tony Evers ordered state agencies to cut $250 million from their budgets in this fiscal year, on top of a $70 million cut three months ago.

In Wisconsin, local governments are highly reliant on the property tax for their revenue, and state law limits the amount by which they are allowed to raise property taxes without a referendum. The property tax is less volatile than other taxes such as sales taxes, which declined precipitously in the first months of the COVID-19 crisis. But local governments will still see the loss of revenue from room taxes and other sources, as well as some potential declines in property taxes.