How Pandemic Could Reshape Our Cities 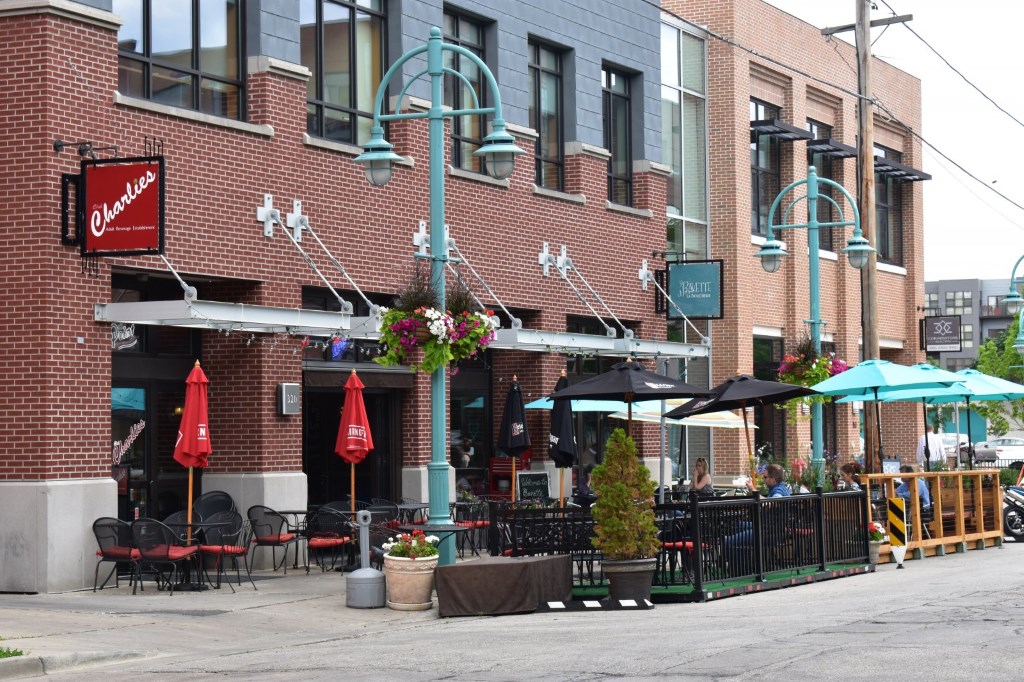 City officials could take public land away from cars and give it back to people as a result of the COVID-19 pandemic. Photo by Amanda Maniscalco.

Dane County and the City of Milwaukee have mandated that everyone wear masks at restaurants, stores, and other indoor gathering places. Wisconsin spent months under a safer-at-home order that has been overturned, but the economic impact of the disease is still getting worse. On top of the pandemic, the country has spent the last six weeks reckoning with one of the largest protest movements in American history as we grapple with the country’s systemic racism.

These compounding crises have brought the country to a crossroads in a variety of ways. The country can come out of this storm ready to rebuild in a more fair and just way, or the system can be allowed to collapse even further as people settle back into what feels normal.

That chance for change extends even to the way our cities are built and function. Urban planners say there are real possibilities to correct major public policy failures and build a more sustainable and fair modern city.

“If we look at crises throughout history, they can be a kickstart for progressive social and urban change,” says Kurt Paulsen, a professor of urban planning at UW-Madison. “But they can also be an opportunity for backlash and anti-progressive forces.”

Paulsen says it is easy to imagine a world that emerges from the pandemic and desperately searches for normal, failing to make any substantial changes. But, he says, there could also be a total reimagining of how we live.

“This is really changing the trajectory of urban governance and we could look back 50 years from now and say this was really a turning point and major progressive changes happened,” Paulsen says. “It’s also possible there will be such a desire to return to normalcy that it will return to trend projection. I don’t think anything is set in stone.”

What is likely to happen is COVID-caused trends stick and become long term policy from urban planners and elected officials, according to Mike Slavney, director for planning services at Madison-based Vandewalle and Associates.

“I think that looking back at history, it is important to distinguish the short-term contemporary impacts from longer term change,” Slavney says. “We’re seeing a very extreme situation that’s likely to return mostly back to the way it was. But I think it’s going to accelerate some trends that were already present and gaining strength.”

If this is that turning point, here are some clues about what it might look like in 50 years to live in an American city.

One response to COVID-19 might allow cities to fix one of the stupidest public policy decisions of the 20th century — giving so much public land to automobile traffic. Cities have been closing streets to vehicle traffic to allow more room for outdoor dining, pedestrian and bike traffic, all activities that have become more popular because of the pandemic.

“Reclaiming streets for people, if that becomes permanent, if we try to reclaim streets for people, I think that’s a good thing,” Paulsen says. “It’s a way to start using the crisis to undo one of the great evils of 20th century American city planning, which is designing cities for cars rather than for people.”

But, like Slavney says, reclaiming city streets wouldn’t be an idea coming out of left field — it’s a response to people needing more space and enjoying the outdoors more. If those habits stick, so could the response.

Even in Madison, the public bike paths and sidewalks have been packed with people biking, walking, skateboarding and rollerblading. Slavney says in addition to closing streets, cities might expand paths and complete unconnected sidewalk networks.

It’s not just streets. The move to remote work for thousands of workers and the increased decline of retail shopping could change the way downtown buildings are used. If working from home sticks and brick-and-mortar stores continue to close, what replaces all that space?

“We don’t have enough rental housing, small-unit housing,” Slavney says. “The housing we do have is not distributed in metro areas and it’s because for 100 years, the whole system has pushed owner-occupied single family houses built on metro edges. That is the least affordable kind of housing to build and often the least affordable to live in. All of those mismatches are being emphasized when people can’t afford house payments and rent.”

“I’m hopeful that the crisis greatly exacerbated by COVID-19 will remain at the forefront and we’ll see some changes,” he continues. “A need for much more diverse housing and the benefits of more centrally located housing jive well with the decline of retail and probably office space. There’s an opportunity for huge redevelopment.”

Of course, if entire downtown areas are going to be redeveloped for rental housing, we might as well kill three birds with one stone. Building affordable housing downtown could also help desegregate American cities and be built sustainably as the effects of climate change worsen (Sustainable infrastructure and affordable, energy-efficient housing are both policy proposals included in the Joe Biden–Bernie Sanders Unity Task Force Recommendations).

“The greatest long-term health crises are racism and the privately owned internal combustion car,” Paulsen says. “If we can use this crisis to get leverage on both of those issues, that would be good. More homes and fewer cars.”

While clawing public land back from vehicles and more mixed-use, affordable rental housing could be the ways in which American cities emerge from these crises stronger than ever, there’s also a much darker possibility.

This spring, in one of Paulsen’s undergraduate classes, the students’ final assignment was to imagine what historians will say about this period in 50 years. About half described the scenario above.

The other half extrapolated from darker trends and pictured a response that would only deepen many of our current problems.

Ridership for public transit is down since the pandemic began, which while understandable in the context of the virus does not bode well for a less vehicle-dominated future society.

People have also been misidentifying population density as a factor in virus spread, Paulsen says. Other places with much higher population density have had lower infection rates, he says. A better predictor of infection in a city than density is the response from the government, according to an analysis in The Nature of Cities.

So while the pandemic could push more people into the very owner-occupied single family homes in the suburbs that deepen racial segregation and create the need for commutes in personal vehicles, Paulsen doesn’t think that’s a good response.

“There are people who want to blame density for COVID-19. European cities are much more dense than American cities, Hong Kong, Seoul, Taipei,” Paulsen says about dense international cities with robust public transit systems. “It’s not the public transit that’s the cause of the problem. We do have to address that anti-urban bias in a lot of our policy making. The real question is whether these really inspiring shoots of anti-racism and sustainability, whether those will cohere into a national movement and national policy change.”

Plus, in the short term, government response to the virus-caused economic collapse could exacerbate the affordable housing crisis, according to Paulsen.

“We’ve thwarted the tsunami of evictions everyone predicted,” he says. “If the federal unemployment [insurance program] goes away at the end of the month and the federal eviction moratorium goes away on the 25th and those rental assistance funds start running out of money, we have a real housing crisis on our hands in August and September.”

While the American city might be at a crossroads, one sign of hope, Slavney says, is that this is what cities are supposed to do. He pointed to his experience working for a year in Seville, Spain preparing for the 1992 Olympics. That city, he says, has been perfectly designed to use shadows to cool the streets.

The reason? Centuries of tearing down and rebuilding have allowed adaptation and evolution. Other cities have responded to contemporary trends that American cities are yet too young to fully understand.

“This is an ancient city, we’ve had 4,000 years to tear down all the crap,” Slavney says. “Cities have always remade themselves to contemporary times and economies and demographics.”

2 thoughts on “How Pandemic Could Reshape Our Cities”