By Michael Rosen and Barbara Toles - Jul 18th, 2020 02:34 pm
Get a daily rundown of the top stories on Urban Milwaukee

Bascom Hall on the University of Wisconsin campus. Photo by Rosina Peixoto (Own work) (CC BY-SA 3.0), via Wikimedia Commons

What exactly does the term “systemic racism” refer to? This question has come up as the Black Lives Matter movement protests in response to George Floyd’s murder have stimulated a national conversation, not just about police misconduct, but also systemic racism.

We need look no further than the way the Coronavirus Aid, Relief, and Economic Security Act (CARES) was directed at higher education funding in Wisconsin to see a perfect illustration of systemic racism: unequal treatment that is baked into public policy. 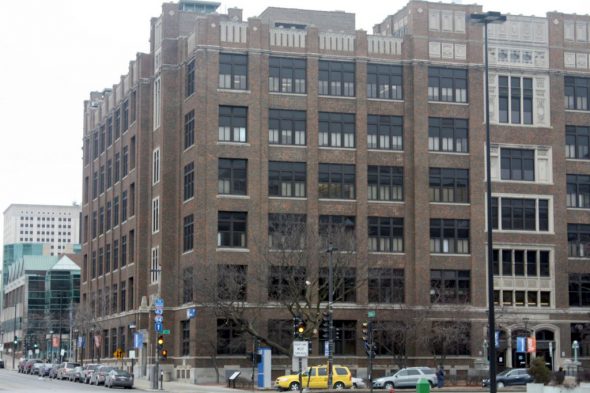 Let’s look at the disparity between the treatment of two absolutely crucial institutions, UW Madison and Milwaukee Area Technical College (MATC) by the CARES Act and how this disparity affects students of different races and classes.

And as important as our flagship university is, MATC students are pursuing education that prepares them to be the nation’s essential workers: nurses, respiratory therapists, firefighters, EMTs, police officers and more.

While MATC students have more unmet needs, they’re also less white than those at UW-Madison. Only 7% of UW Madison’s 45,319 students are African American, Native Americans or Latinx. MATC, on the other hand, is the state’s only majority minority college.

How could a bill intended to help those in need end up helping the privileged much more, and actually discriminate against students of color? The answer is found in a metric used by both state and federal government to distribute aid to higher education — Full Time Equivalents (FTE).  This measurement treats a full-time student as normal.  However, students from low-income families need to work to afford college and generally cannot survive full class loads. The majority of college students, slightly more than 50%, attend part-time.  Part-time students are older, are disproportionately from minority/ethnic backgrounds and more likely to be the first in their family to attend college.

Take Shemicka Free, a recent Respiratory Therapist graduate who worked two jobs while taking care of her children and attending MATC. She took part time classes for several semesters before she could go full time. However, Shemicka’s rent, food, clothing and utility bills weren’t on a sliding scale based on the number of credits she took. Her needs were great when she was a part-time student, and even greater than the average student taking a full course load at UW-Madison.

This uneven dynamic exists throughout the country. The Georgetown University Center on Poverty and Inequality focused a study on older students who commonly attend part-time. Their analysis shows that average annual overall costs beyond tuition are statistically higher for part-time students ($43,040) compared to full-time students ($38,237).

That hurts two-year colleges like MATC with large numbers of part-time and impoverished students.

The good news is that this is an easy problem to fix.

Organizations like The Hope Center for College, Community and Justice at Temple University recommend junking the current FTE system as the benchmark measure to base student aid on, and using a much simpler method. “Both federal and state policymakers should revise their institutional funding formulae to emphasize headcount rather than FTE’s.”

FTEs may not have been intended to perpetuate and exacerbate racism, but that’s irrelevant. They do. Replacing aid formulas from FTE to head count would help reverse this systemic discrimination. It would greatly help community colleges like MATC that educate almost 40% of the nation’s students, and a much higher percentage of non-white students than four-year colleges.

Every student requires support from their college and for their living expenses, regardless of how many credits they take each semester. Part time students’ educations should not be discounted as if they are less important.  The HOPE Center recommends that,” Both federal and state policymakers should revise their institutional funding formulae to emphasize headcount rather than FTE. Doing so will promote equity and direct the flow of public funding towards the most public of all higher education institutions: the community colleges.”

If our goal is to create an educated populous and thriving multiracial democracy, we must invest in our students of color, and the comprehensive two-year colleges like MATC that they attend.

One concrete way of making black lives matter would be to remove the current ingredient from the college aid formula that carries the systemic virus of racism.