Instead of convening and legislating, Republican legislators pitch a personal loan program.

By Erik Gunn, Wisconsin Examiner - Jul 9th, 2020 12:40 pm
Get a daily rundown of the top stories on Urban Milwaukee 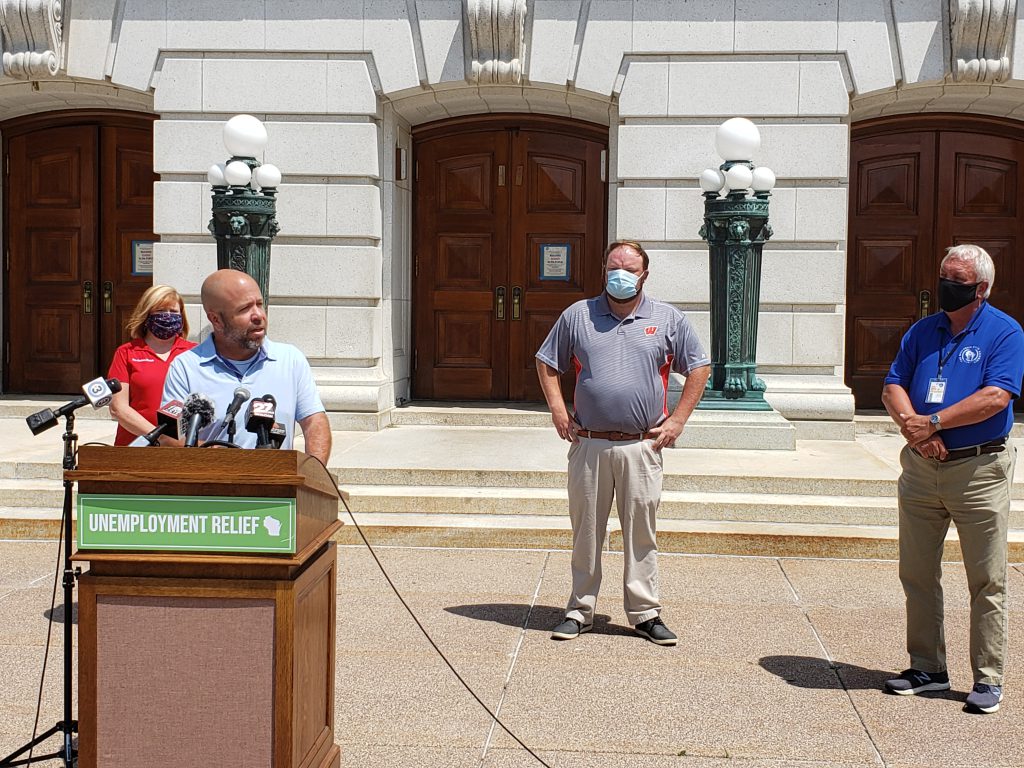 At a news conference outside the west entrance of the Capitol on Wednesday afternoon, Assembly Republicans renewed their attacks on Gov. Tony Evers and the Department of Workforce Development for the state’s continued COVID-19 induced backlog of unemployment claims — then offered free advice on fixing it.

Their proposal: Lend people whose applications have been in limbo — approximately 140,000 individuals, according to state estimates — $327 a week to tide them over until their applications are approved.

“How long are these 140,000 people supposed to wait?” said Assembly Majority Leader Jim Steineke (R-Kaukauna). “How long can people go without any income without being able to pay their bills? And how long are we going to tolerate the excuses from the administration without any real action of solving the problem?”

The Assembly Republicans’ Capitol press conference was one of five that they organized around the state Wednesday to unveil their plan for the unemployment backlog; events were also held in Oak Creek, La Crosse, Green Bay and Wausau. Democrats said there had been no consultation with either their side of the aisle in the Legislature or with the governor’s office.

Several GOP legislators spoke of calls from anguished constituents whose applications were on hold for weeks.

“One of the most egregious things we’ve heard during this COVID-19 pandemic is our constituents having to suffer from having their employment shut down, and yet no unemployment relief coming to them,” said Rep. Barb Dittrich (R-Oconomowoc), at the Madison news conference.

Their proposal to ease the wait for benefits doesn’t entail legislation, which would require the Legislature to meet — something Republicans have said they want to avoid. The Republican leaders, who hold majorities in both houses of the Wisconsin Legislature, have scheduled no floor sessions for the rest of the year, having wound up their regular sessions in February, and meeting just once in April to pass pandemic-relief legislation.

The plan described to reporters Wednesday was more conceptual than concrete, with sketchy mechanics but leaving details for the administration to fill in. The idea, Steineke said, would be to take some of the $280 million remaining in the state’s nearly $2 billion allotment from the federal Coronavirus Aid, Relief and Economic Security (CARES) Act and use it to fund loans to pending applicants.

Evers could do that without legislative action, Steineke said; the governor’s office has sole control over how the CARES funding is spent. The Department of Revenue, he speculated, might oversee such a loan program in the manner that it administered a one-time $100-per-child tax credit enacted under then-Gov. Scott Walker in 2018.

Steineke said people who have applied for unemployment and are waiting to learn if they qualify would apply for the proposed loan. “If they were eventually granted the unemployment compensation and their claim went forward, then it would become a repayable loan,” he continued. “If they were denied the application, It doesn’t diminish the pain of these people that are out of work. So those people would be able to qualify for a forgivable loan.”

State Department of Workforce Development Secretary Caleb Frostman has pointed to a series of obstacles contributing to the unemployment claim backlog — starting with an unprecedented surge of applications as layoffs mounted in March and April with the onset of the pandemic and the state’s response. The state’s computer system that manages the unemployment claim system dates back nearly a half-century and is unable to be run around the clock, DWD officials have said — complicating an earlier proposal from Republican legislators to extend hours for the unemployment application call center.

Additionally, according to the department, while DWD has hired more people and transferred workers from elsewhere in state government to process claims, staffing up takes time: the job requires screening and training because people who conduct intake are dealing with sensitive identifying information.

Steineke alluded to those previously aired explanations for the backlog, but dismissed them: “It’s really easy to second-guess things like computer systems and play Monday morning quarterback,” he said.

Democrats said the Republican proposal came with no advance consultation of either the governor’s office or legislators on the other side of the aisle.

The idea of advancing payment through a loan before a claim is affirmed has been floated, State Rep. Christine Sinicki (D-Milwaukee) tells the Wisconsin Examiner, but that’s complicated by the rules of the unemployment program itself, which is governed in part by federal law.

Claims that aren’t resolved quickly are hung up on issues of legal interpretation. If payment is made, she says, “what if it’s found that you’re not eligible? How are you going to pay it back?”

Sinicki criticizes the Republicans for the paucity of legislative meetings in the state this year. “They have the ability and the power to call us back into session and deal with these issues,” she says. “We asked them several times to do it, and they refused. Their political games have already cost the state $25 million, because they refused to go back in in a timely manner.”

She was referring to Republican leaders’ delay until April 13 in scheduling the session that approved the state’s pandemic relief package, including a suspension of the state’s one-week delay for unemployment compensation claims. Suspending that delay was a condition for federal coverage of unemployment compensation that was included in the CARES Act, and Wisconsin missed out on coverage for the three weeks between passage of the federal law and the state one.

Sinicki says she doesn’t trust that Republican lawmakers would adhere to promises to forgive the loan if an applicant didn’t qualify for unemployment, citing their support for increased restrictions on unemployment compensation during the last decade that they’ve held the majority in the Legislature.

“Do you really trust them to say, oh, we’re going to do the right thing by these people? And we’re just gonna let them keep the money?” she asked. “No, this is nothing more than a political stunt.”