Cites Republican and Supreme Court opposition even as state cases double in just one month.

By Erik Gunn, Wisconsin Examiner - Jul 8th, 2020 04:15 pm
Get a daily rundown of the top stories on Urban Milwaukee 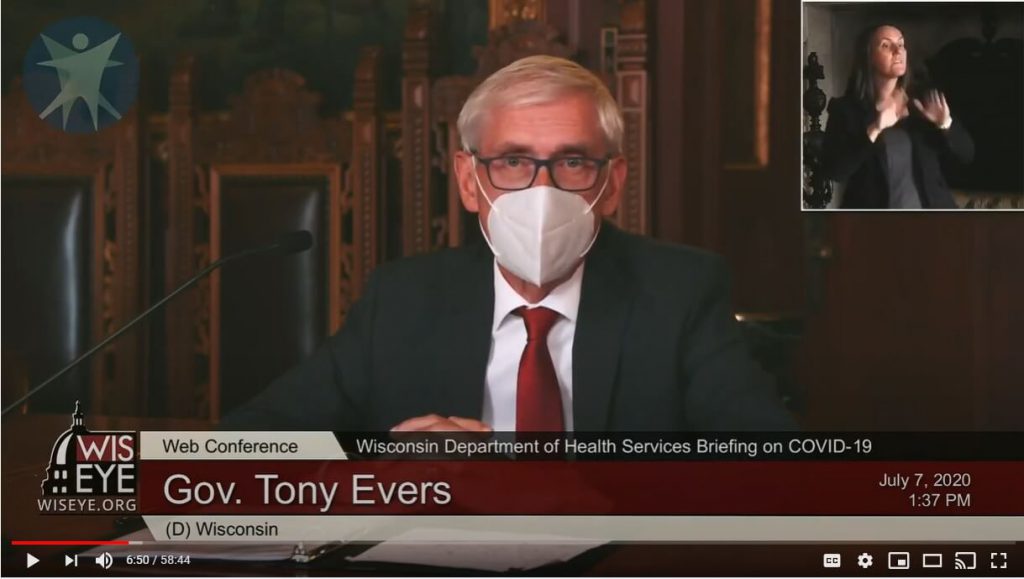 Wearing a protective mask as recommended by public health experts to reduce the spread of COVID-19, Gov. Tony Evers addresses reporters in a telephone and live-streamed news conference Thuesday, July 7. (Screenshot from Youtube)

The COVID-19 death toll is slowing down, but the infection is spreading in Wisconsin at the fastest rate in months. And Gov. Tony Evers said Tuesday that while the state is providing resources to combat it, the most direct tools are in the hands of Wisconsin residents, acting voluntarily.

“Folks, we cannot let this trend continue,” Evers said in a telephone news conference with reporters. “We cannot go back.”

Doubles in one month

Wisconsin is in the midst of “a surge in positive COVID-19 cases,” said Andrea Palm, secretary-designee for the Department of Health Services (DHS). Through Memorial Day, “It took Wisconsin five months to get to approximately 16,500 cases,” she said. “But in just a little over one month, that number has more than doubled.”

As of Tuesday, DHS reported 32,556 confirmed cases of COVID-19, with an average of 556 a day over the last week. To date, the state has recorded 805 deaths from the illness.

Reversing that trend will demand a statewide effort, said Evers and Palm — and, said Evers, it will have to be a voluntary act.

Evers said he’s been asked whether he would issue a new Safer at Home order like the one that took effect March 25 and was thrown out May 13 by the state Supreme Court following a lawsuit by the Republican leaders of the state Legislature, or whether the administration might issue a statewide requirement for people to wear masks to curb the spread of the virus.

“Unfortunately, the reality is that the Supreme Court ruling in the Republican lawsuit really has sunk our ability to respond to this pandemic,” Evers said. “And that’s why we continue to ask for your help. Public health is everyone’s issue. Overcoming COVID-19 is on every community, on every age group and every Wisconsinite.

The latest data show that 24% of all COVID-19 cases are among people in their 20s, said Palm. They are often less likely to show the most severe symptoms, said Dr. Ryan Westergaard, chief medical officer for the DHS Bureau of Communicable Disease, and the concentration of infections in that age group is probably one reason that reported death rates from the illness have been lower in recent weeks.

“But because a lot of people are becoming infected in younger age groups, that also means that the number of people with asymptomatic infection is increased,” Westergaard said. That, he added, makes ensuring the tests for the virus are widely available and accessible all the more important.

“It’s a really dangerous situation right now that transmission seems to be going up,” he said.

Underscoring the point, all three — Evers, Palm and Westergaard — wore masks during the press conference, which was livestreamed on YouTube and broadcast on WisconsinEye.

Even as the illness is spreading farther and faster than it has been, Wisconsin is continuing to look ahead to the fall and resuming school. To that end, DHS and the Department of Public Instruction have been collaborating on plans, and the state is arranging to distribute more than 2 million cloth face masks and more than 4,200 infrared thermometers to test for fevers, an early COVID-19 symptom.

At the same time, said Evers, it will be up to individual districts, with guidance from the two departments, to decide whether and how to open, including whether to provide in-person classes, virtual learning, or some combination of the two.

Evers, who took part in a phone conference with U.S. Education Secretary Betsy DeVos, said he strongly disagreed when DeVos asserted that all schools should be open and offering in-person classes or they would “fail” children and taxpayers.

“I think in-person is preferable,” said Evers, but he added that schools and districts needed to consider all its available options. “I would not consider a district who offers a hybrid, partially in school and partially online, to be failing in their responsibility.”

Stay home — without an order

Along with thorough handwashing and other hygiene practices, using hand sanitizer and wearing a mask in public so as to reduce the risk that someone who has the virus and doesn’t know it would spread it to others, it’s also important to avoid large gatherings in close proximity, Palm said.

Contact tracing of people infected with the virus has shown that many have taken part in mass gatherings, she noted. “We are cautioning against risking that type of interaction because we know how contagious this virus is,” said Palm. “We want to mitigate the risk as much as possible, so we can stop the spread and really beat this virus. Until we get a vaccine that can help us more medically, all we’ve got is each other.”

Palm acknowledged that recently high numbers are “unsettling.” She urged people not to be put off by the trend, but instead to consider it motivation to redouble efforts to stay safe. Back in April and May, “We flattened the curve and were slowing the spread, and we can do it again,” she said. “Our statewide response can only succeed when we do our part to stay home and practice good public health measures.”

Palm and Evers both decried instances in which, they said, public health workers have faced hostile confrontations because of their work.

“Whether it’s an issue of wearing a mask or a decision made locally by a public health officer based on science and based on the best recommendation, to politicize that to the point where people are harassed locally because of that — we’re better than that,” Evers said. “I’m glad it’s not happening everywhere, but there’s enough of that out there that I encourage people to understand that this is not a political issue — it’s a virus issue. The virus doesn’t give a crap about whether you’re a Democrat or a Republican.”

“The virus here is the bad guy,” said Palm, “and it is incredibly stressful and produces a lot of anxiety for all of us as we work to deal with this together… We should all be demonizing the virus, and not each other.”

Evers said the administration continues to look “at all the options that are available to us,” but reiterated his assertion that the resistance on the part of the Legislature’s Republican leadership and the state Supreme Court would make any statewide measures all but impossible.

He recalled a recent telephone conversation with a man he identified only as “a business leader” who implored him to institute a statewide mandate for masks in public, and who, Evers said, called that a key to “our ability to survive economically as a state.”

The odds of being challenged by the Republicans are “probably 100%, and our chances of losing in the Supreme Court probably very close to 100%,” Evers said he told the caller. “He said, ‘Do it anyway.’”