The War Against Masks

It’s the most cost effective way to slow the pandemic. So why such opposition?

In an article published on June 30th in Madison.com, former U.S. Senator Bob Kasten asserts that “Wisconsin is successfully keeping the [COVID-19] virus under control.” Does the evidence support that assertion?

The graph below shows the newly reported cases in Wisconsin each day since March 5th. The dotted blue line shows the 7-day moving average of the new cases. The vertical dotted green line shows the date of the Wisconsin Supreme Court’s decision against the governor’s emergency order aimed at reducing the spread of the virus. 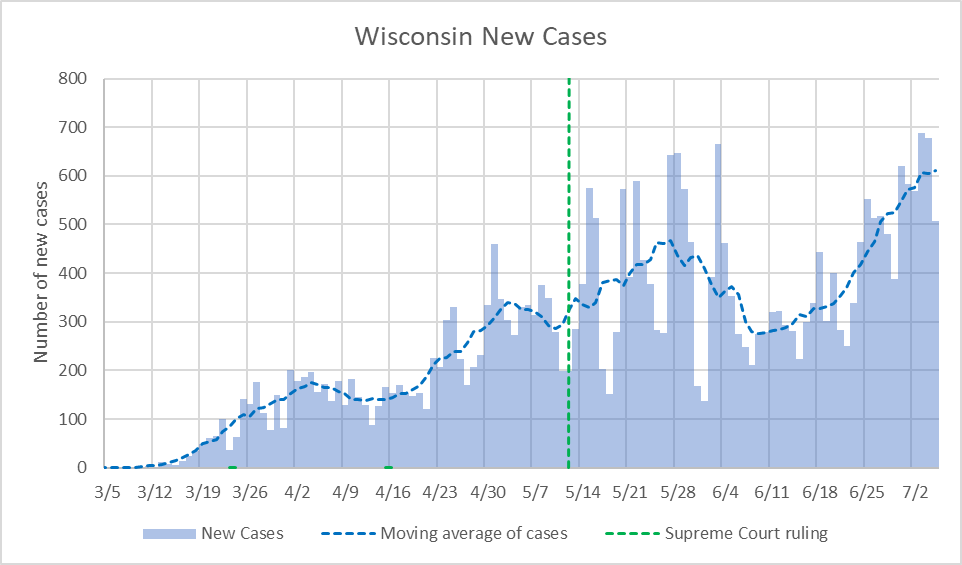 Following the court’s decision, the number of cases in Wisconsin continued to rise for two weeks, only to fall over the following two weeks, perhaps leading support to an impression that COVID-19 was “under control” in Wisconsin. However, by the time Kasten’s column was published, cases had been steadily climbing in Wisconsin.

At the time the court issued its decision, new cases were being found at the average rate of 300 per day. Most recently, that average has doubled—to 600 per day. One factor behind this growth is COVID-19’s steady spread to more Wisconsin counties.

Consider Dade County. On February fifth of this year, Dane County reported Wisconsin’s first known case of COVID-19. Despite this early introduction to the virus, Dane County’s next infection didn’t occur until over a month later—on March tenth. As the next chart shows, subsequent Dane County cases have been steady but quite low, particularly when compared to Milwaukee. However, in mid-June that changed, as the next chart shows. 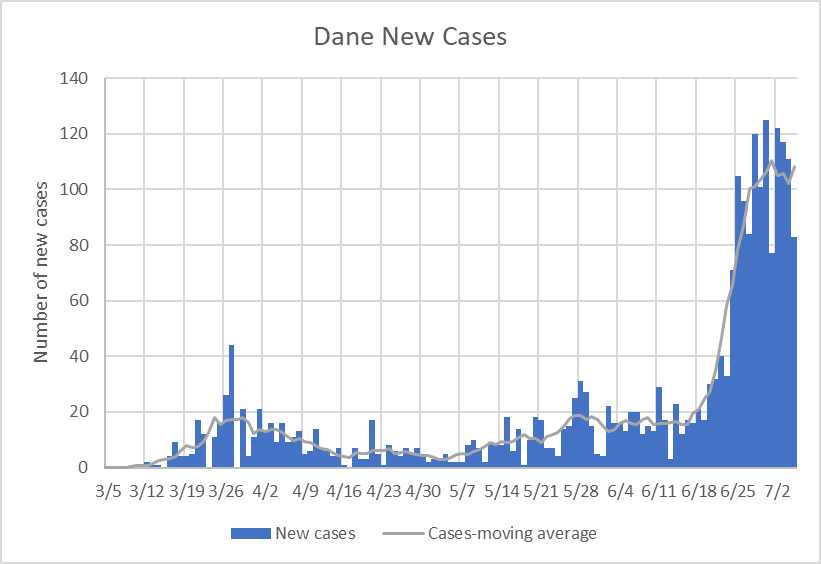 As the next graph shows, the number of tests given in Wisconsin has been drifting downward since early June, rather than increasing. 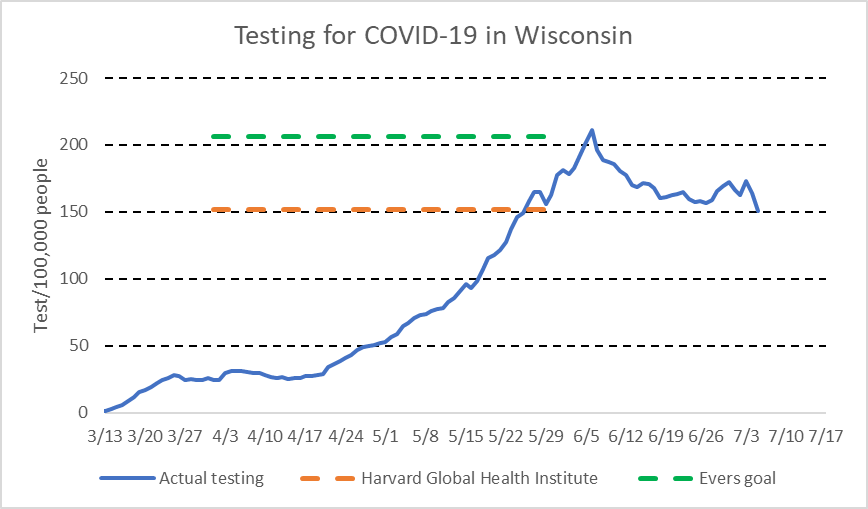 Testing for COVID-19 in Wisconsin

After bottoming out in June, the percentage of positive results—showing the presence of COVID-19—has been growing, as shown below. Again, this is consistent with a real growth of cases in Wisconsin, contrary to Kapenga’s (and Trump’s claim). 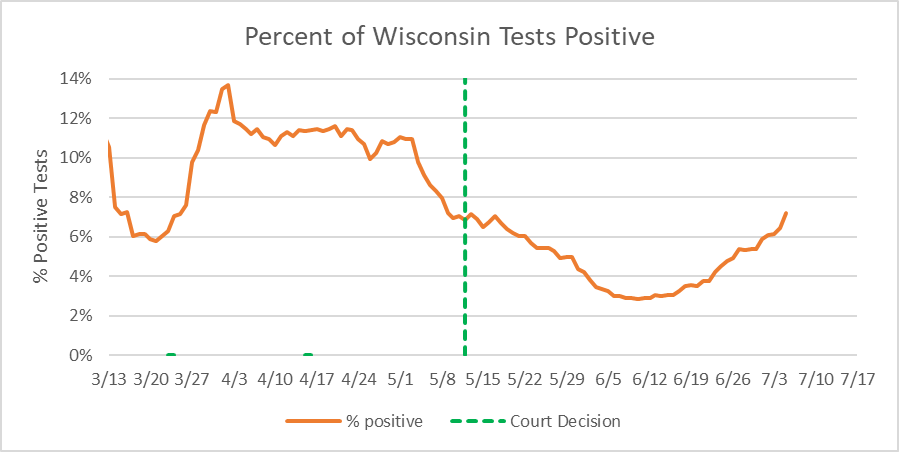 Perhaps the most worrying measure for the future of the pandemic in Wisconsin comes from a model to estimate the value of Rt—the average spread rate of each person with COVID-19. Rt is defined as the average number of other people each person with COVID-19 infects. Currently the model estimates that each person who contracts the virus infects about 1.4 others, which ties with Montana for the highest of any state. According to the model there is an 80 percent probability that the true value falls between 1.1 and 1.6. 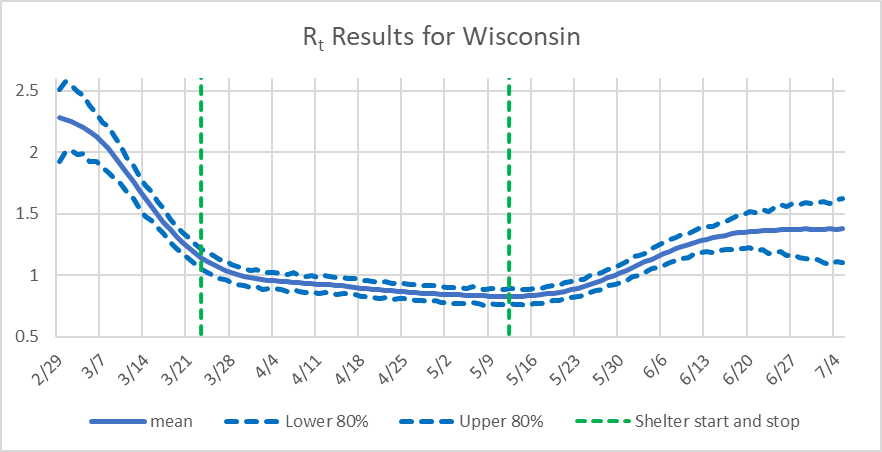 The two vertical lines show the start of shelter (when the governor issued his emergency order) and its stop (when the state Supreme Court ruled against extending the order). It does appear that the governor’s emergency order served to drive down Rt, while the court’s order drove it back up.

The next scatter plot looks at the history of all 50 states. On the horizontal axis are the number of cases (per hundred thousand residents) that each state experienced prior to the end of May. On the right are New York, New Jersey, and other highly urbanized states in the Northeast that were heavily impacted at the start of the pandemic. 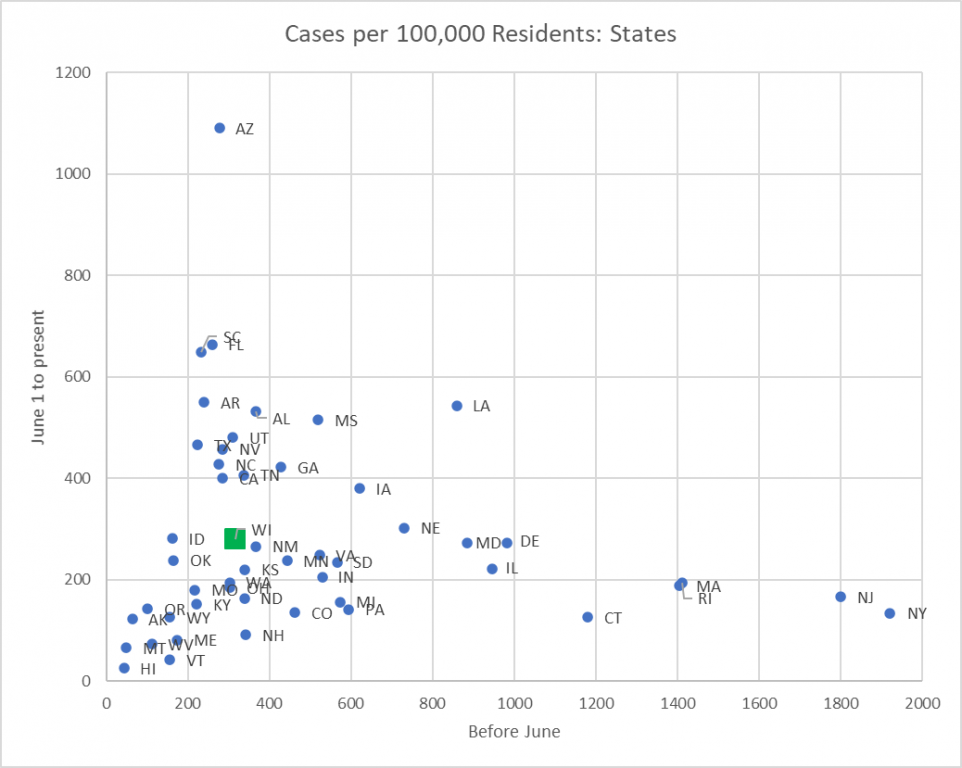 The vertical axis shows the number of cases each state had starting June 1st. The states with high numbers are in the South and West and mainly avoided the full brunt of the early pandemic. In many of these states the governors seem to have taken their relative luck in the early part of pandemic as assurance that they could safely reopen bars, restaurants, and other places where people cluster even while COVID-19 was freely circulating. A number of these states are now reversing their reopenings and scrambling to expand their hospital capacities.

The states in the lower left-hand corner did relatively well with both the early and late parts of the pandemic. So far, Wisconsin (shown with the green square) could be included in this group. Its total number of cases of 600 per 100,000 residents (0.6 percent) meant that 65 percent of states had a higher caseload.

However, the evidence described above suggests that Wisconsin is on track to experience an increasing number of cases, unless there is some intervention. This is likely to make many residents reluctant to circulate and therefore put a damper on the Wisconsin economy. Rather than the “V-shaped” recovery that Kasten predicts, Wisconsin may be facing increasing infections, forcing either planned shutdowns or unplanned impromptu shutdowns as residents decide that participating in many economic activities is too dangerous.

Probably the most cost-effective way to head off this future is convincing people to wear masks whenever they cannot physically distance from others. There is credible evidence that this could drive down Rt to some number below one, in particular by reducing the odds that people whose symptoms have not yet appeared will infect others.

Oddly, the Trump administration seems intent on sabotaging the use of masks. Trump himself refuses to wear one. He insists on holding rallies with no masks or other distancing. Most infamously, his campaign removed social-distancing stickers from seats at his Tulsa Rally

On the right of the political spectrum, there is a whole edifice devoted to convincing people not to use masks. A hiker on the Ice Age Trail told me that by wearing a mask I was putting my lungs at risk. There is no evidence for this claim or the parallel claim that wearing a mask will “lower the immune system.”

Kasten completes his column on a Trumpian note:

There’s only one thing that could jeopardize our recovery, and it’s not a mythical “second wave” of coronavirus infections — it’s the potential election of Joe Biden as president. In place of Donald Trump’s pro-growth, pro-worker, pro-American agenda, Biden would be a stooge for the radical left, adding mind-bogglingly-expensive big-government programs such as the $93 trillion “Green New Deal” to the job-killing taxes and regulations that hamstrung our economy during the Obama-Biden administration and that he plans to revive.

There is widespread agreement among economists that the best way to restore a vibrant economy is to attack the frequency of COVID-19 infections. Unfortunately, many politicians have it backwards. Like Kasten, they believe that the economy can be opened up even while ignoring the virus.

10 thoughts on “Data Wonk: The War Against Masks”