By Erik Gunn, Wisconsin Examiner - Jul 7th, 2020 11:13 am
Get a daily rundown of the top stories on Urban Milwaukee 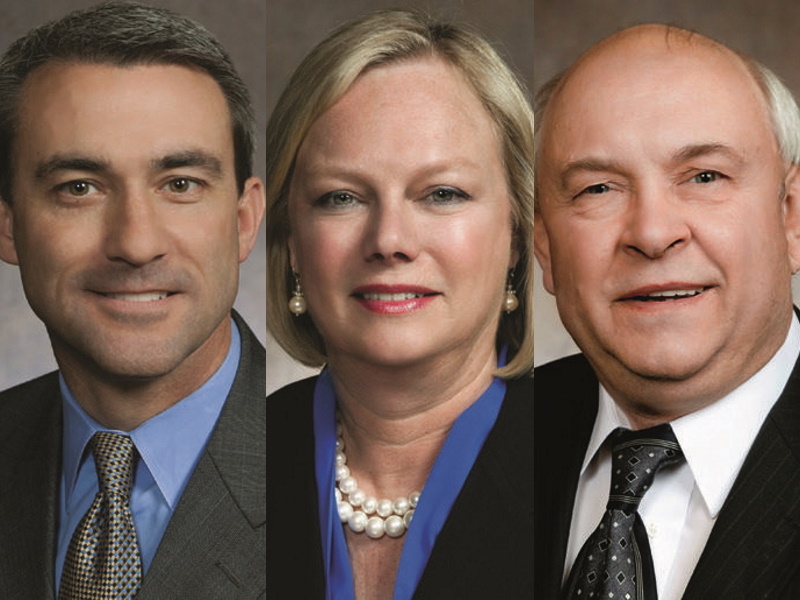 Rob Hutton, Cindi Duchow and Gary Tauchen. Photo from the State of Wisconsin.

In early May, 43 state lawmakers sent a letter to the Wisconsin congressional delegation with an emphatic message: Don’t provide financial relief to state governments.

The legislators, all Republicans, characterized the act of helping state governments offset revenue losses from the COVID-19 pandemic as “funding bailouts for irresponsible states across the country, like Illinois, New York and California.”

But for at least three of those same lawmakers, bailing out business is perfectly fine. Federal data released Monday show that three legislators who signed on to the letter have ownership stakes in businesses that scored hundreds of thousands of dollars in federal funds for pandemic relief.

The businesses were recipients of the federal Paycheck Protection Program (PPP) funds, a forgivable loan program set up by Congress as part of legislation to provide economic aid during the COVID-19 pandemic. The PPP is administered by the Small Business Administration (SBA), which Monday released limited data on PPP recipients after Freedom of Information Act requests from a large number of news outlets, including the Wisconsin Examiner.

Besides businesses in which lawmakers have a direct ownership stake, five of those who signed the letter are connected with PPP-recipient organizations that employ immediate family members.

Exactly how much individual businesses have received in PPP funds still has not been disclosed. The SBA data released Monday simply shows whether a recipient’s funding is in one of five broad bands topping out at $10 million. And recipients who have gotten less than $150,000 from the program are not named at all; the records only provide a generic description of those organizations and name the communities where they’re located.

The Wisconsin Examiner  compared the names of companies receiving $150,000 or more under the PPP with the names of businesses lawmakers have reported on their Statement of Economic Interest documents filed with the Wisconsin Ethics Commission. On the statements, which are filed every election year, lawmakers list any businesses in which they have at least 10% direct ownership, and also any organizations or companies where they or an immediate family member holds a job.

Signers of the letter with interests in businesses that got $150,000 or more in PPP funds were State Reps. Rob Hutton (R-Brookfield), Cindi Duchow (R-Town of Delafield) and Gary Tauchen (R-Bonduel).

Signers of the letter aren’t the only lawmakers who have received PPP funds. A popcorn sales company owned by State Assembly Speaker Robin Vos (R-Rochester) received between $150,000 and $350,000 under the program. A Vos spokeswoman told the Milwaukee Journal Sentinel that the money was used to cover employees’ wages. Vos did not sign the May 8 letter opposing federal aid to states.

Direct aid for state and local governments has been on the wish list for many in government as well as outside observers concerned with government policy.

“States typically do the job of keeping money flowing through communities,” says Tamarine Cornelius, an analyst for the Wisconsin Budget Project, an initiative of Kids Forward in Madison. The organization researches and promotes policies to help families, especially those living in poverty and families of color.

State spending helps ensure safety and provide other forms of public services that low-income people especially depend on, Cornelius explains. But the pandemic has taken a bite out of state revenues, which largely depend on sales and income taxes, both of which have been down as a result of the economic slowdown that the pandemic produced.

Those “huge cuts in revenue could force the state to implement austerity measures,” she continues. “In the Great Recession [of 2008] the federal government gave states fiscal relief — money to help pay for critical services that help communities thrive. This time around the federal government hasn’t done that.”

While federal aid has gone to the states for specific needs related to public health, “that cannot be used to address the effects of the economic closure on the revenue base,” Cornelius says. Without federal relief, “states are going to have to shut down important services for families and communities.”

That’s not how the 43 legislators who urged the state’s seven members of Congress and two senators to turn their back on any form of state relief see things, however.

The May 8 letter largely targeted Illinois for “spending and borrowing recklessly” and for having spent “years … failing to fund their overly generous pension system.”

In contrast, the letter boasted that Wisconsin had passed Act 10 — former Gov. Scott Walker’s law gutting union rights for most public employees — and had enacted other budget-cutting initiatives to balance the state’s budget. “Wisconsinites can’t afford to bailout reckless budgeting from other states,” the letter declared.

The businesses that received PPP funds and are owned in full or part by lawmakers who signed the letter got anywhere from $150,000 to $1 million, according to SBA records.

Duchow’s statement of economic interest lists her as owning 10% or more of Southport Marina in Kenosha. Southport Marina Development Corp. received between $150,000 and $350,000 under the PPP.

In addition to the Southport Marina connection, a business for which Duchow’s husband, Craig, works is also a PPP recipient, according to SBA records. Centerpointe Yacht Services, in Milwaukee, where Craig Duchow is general manager and principal, received between $350,000 and $1 million in PPP.

Four other lawmakers who signed the May 8 letter also have connections with PPP recipient organizations through the employment of an immediate family member or, in one instance, the lawmaker himself, as shown by the legislators’ economic interest filings. The statements on employment in the state ethics documents aren’t specific about the family members involved, but the Examiner was able to identify the relationship in some instances through other sources.

The lawmakers, the businesses employing immediate family members, and the PPP funds those organizations received, are:

One thought on “Legislators Who Opposed Pandemic Aid Grab Grants”