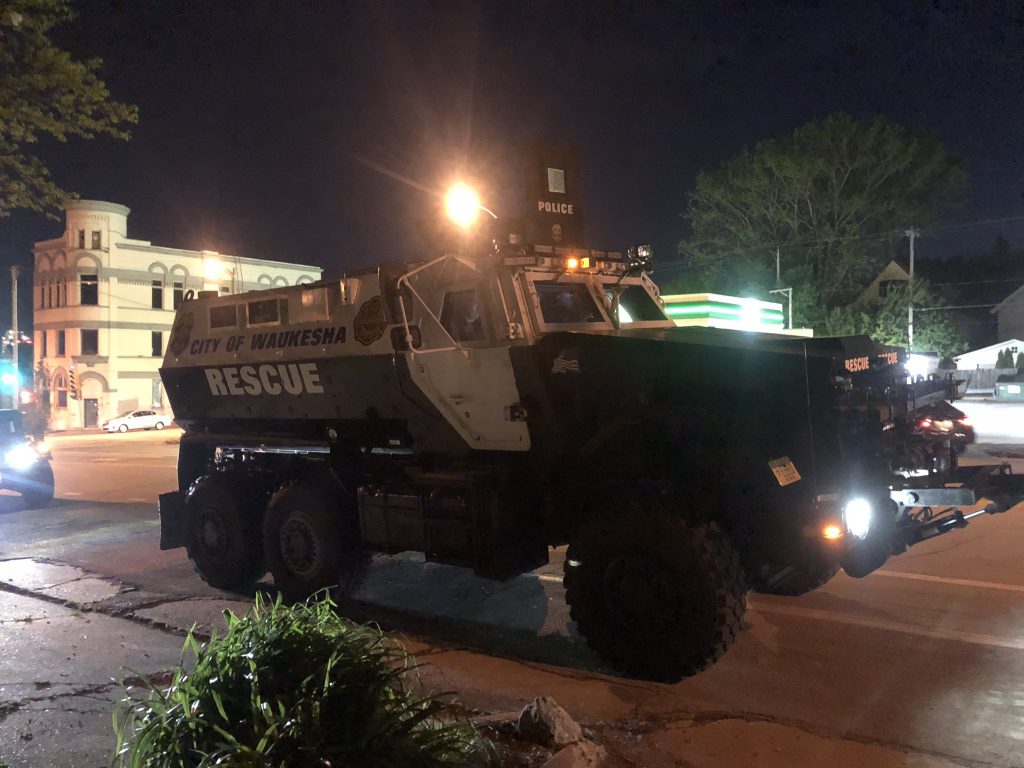 The Waukesha Police Department’s MRAP was in Milwaukee during the early days of the protests. Photo by Jeramey Jannene.

Which came first: the chicken or the egg, the armed citizen or the police in mine resistant vehicles?

In recent weeks, as the country grapples with the role of the police and its history of racial injustice, Americans have watched images of police officers jumping out of armored vehicles in riot gear as military helicopters and surveillance aircraft circle overhead.

All of this has come in response to protests against police violence.

The response was no different in Wisconsin. The National Guard was called to Madison and Milwaukee. There were 31 police agencies, from as far away as Hudson, responding to protests in Madison.

But before this current movement, a federal program was building a high-powered arsenal in Wisconsin’s police departments. The cops say the use of military equipment protects them in high-risk situations, but critics — and researchers — say it does more harm than good by eroding the perceived legitimacy of the police.

The U.S. Department of Defense’s Defense Logistics Agency (DLA), provides military equipment to local police departments through something called the 1033 Program. Since the early ’90s, equipment no longer needed by the military has been sold off, donated or transferred to law enforcement agencies and citizens.

Most of that equipment is benign — in recent years Wisconsin law enforcement has received coffee makers, ovens, extreme cold weather gear (necessary here in Wisconsin), office furniture and even garden tools. This “general property” is also available for sale to the public and made up 92% of all the transferred items in 2019, according to the DLA.

The rest of the transferred equipment — including firearms, aircraft, armored vehicles and night vision goggles — known as “controlled property,” is given to local, state and federal law enforcement but remains the property of DoD. Every state participating in the program has a designated coordinator and in order for a police department to receive equipment, it must apply to the coordinator.

Departments “must have a justification outlining how the property will be used; additionally, requests must be for bona fide law enforcement purposes.” When a department no longer needs the equipment, it must go back to DoD.

Over the last few decades, Wisconsin law enforcement has found “bona fide” purposes for a list of equipment that sounds more like a video game than a police department. This list, from DLA’s database, includes only equipment that Wisconsin agencies have received through the 1033 Program — meaning it leaves out equipment purchased from private companies or acquired through other routes. 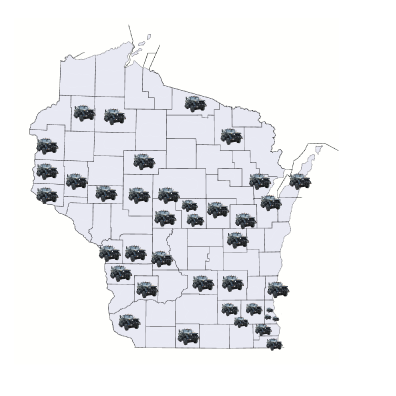 The MRAPs, carrying a sticker price between $495,000 and $733,000, were built to protect soldiers in Iraq and Afghanistan from improvised explosive devices, but now they sit in the garages of 39 police departments and sheriff’s offices around Wisconsin (Brown, Pierce and Polk Counties have each received two MRAPs through the program).

IEDs are not a common threat on Wisconsin’s roads.

So some agencies pull them out for parades, county fairs or their youth education programs. Others, like the Dodge County Sheriff’s Office, have used their MRAP for flood rescue. Overwhelmingly, police say their MRAP doesn’t get used very often, but when it does it mostly provides bulletproof cover for “high risk” situations.

Most of the MRAPs, 29, are used by county sheriff’s offices, but the remaining 13 are in local police departments in cities as big as Eau Claire and Appleton or as small as Whitewater and Tomah.

In Whitewater — a city with a population of 14,000 and a university with an undergraduate enrollment of 10,000 — there isn’t a dedicated grocery store. But in the city garage, the police have an MRAP.

Saying he was in a meeting, Whitewater Police Chief Aaron Raap told Wisconsin Examiner he couldn’t go into details about the city’s armored vehicle.

“Other than that it’s on the [DLA] list, I can’t say anything further,” Raap said. “We use it for everything every other city would use it for.”

But Whitewater Common Council member Brienne Diebolt-Brown says that it does not get taken out of the garage. Last week, the common council passed a resolution that supported racial justice and called for reforms to the police department.

“It doesn’t get used,” Diebolt-Brown says. “We need to be making sure we’re not militant. When the city council was informed it had been given to us, all of us were shocked and half of us were horrified. It does not get taken out, we do not want a show of force.”

In Eau Claire, Police Department Lieutenant Ben Frederick says the city’s MRAP is rarely used, but gets pulled out by its SWAT team for “critical incidents” in which the police department thinks “the armor will aid in stabilizing the situation.”

Frederick pointed to an incident in 2017 in which a man was barricaded in his home with a long gun and fired a shot at the armored vehicle.

“My personal belief is that when you do have the threat of a firearm or a firearm being used, armor is extremely critical in protecting the community,” Frederick says.

Representatives of sheriff’s offices could also point to a handful of times the MRAP was used in recent years.

Dunn County Sheriff Kevin Bygd says in an email that his county’s MRAP was used in 2016 to apprehend the man who killed a Rusk County Sheriff’s Deputy.

“The vehicle has been used less than a dozen times since we acquired it in 2014, but it has been a very useful tool when we needed it,” Bygd’s email says. “I’m not sure what your angle is here, but the one example of the Rusk County deputy’s homicide and the safe apprehension of the murderer should be plenty of justification to have an armored vehicle.”

Clark County Sheriff Scott Haines says his MRAP hasn’t been used since Sept. 2019 in response to a shooting in the City of Loyal.

“We’re in a pretty rural setting up here in Clark County,” Haines says. “In Wisconsin, pretty much everybody’s got a gun and they’re mostly high powered. It’s basically for our protection.”

Door County Sheriff’s Office Chief Deputy Patrick McCarty says the county’s multijurisdictional SWAT team uses the MRAP on high-risk search warrants, but, he says, in his five and a half years at the department there’s been just one high-risk warrant and one barricaded subject to respond to.

Overall, the mindset of the police working in agencies with MRAPs was that if the armor can protect an officer just once — even in a situation that happened years ago — it’s worth it.

But the tradeoffs police make, when deciding to roll into town in their armored vehicle, are too high a price to pay, according to Dr. Greg Gelembiuk, a professor at UW-Madison who served on the City of Madison Police Procedure and Policy ad hoc committee.

The math doesn’t add up, especially as the job of police has continued to become safer, according to FBI statistics, because the gain in officer safety is lost in community support.

“Militarization of the police does not help,” Gelembiuk says. “For one thing, it reduces police legitimacy, when you reduce police legitimacy you have a counterproductive effect. Overall it’s a really bad idea. It basically generates the idea of an occupying force. That’s not what you want for policing.”

That’s not the only way police obtaining military equipment can backfire, according to Gelembiuk. If you give the police a tool, they’ll find a way to use it.

“The other problem you have is that when police acquire a tool, they’ll use it, and they’ll often use it inappropriately,” Gelembiuk says. “One of the big problems is, whenever they acquire these things, whether it’s an MRAP or other tools, there’s a tendency in American policing to overuse it or use it inappropriately.

Gelembiuk cited a massive 2018 study by Princeton professor Jonathan Mummolo. In the study, Mummolo gained access to a data set outlining the location of every SWAT deployment in Maryland over a period of five years, while also conducting a massive survey of public opinion. He found that “the often-cited trade-off between public safety and civil liberties is, in the case of militarized policing, a false choice.”

Mummolo’s study analyzed the effect militarized policing has on the crime rate, officer safety and perception of the local police department and found that SWAT team deployments have no effect on lowering the local violent crime rate or the rate at which officers are harmed.

At the same time that these deployments are having no effect on crime or safety, Mummolo found that the use of armored vehicles such as MRAPs greatly harms the reputation of the local police.

“I find no firm evidence that SWAT teams lower an agency’s violent crime rate or the rates at which officers are killed or assaulted,” Mummolo writes. “Using survey experiments, I show that citizens react negatively to the appearance of militarized police units in news reports and become less willing to fund police agencies and less supportive of having police patrols in their own neighborhoods.”

But Mummolo’s study only confirmed what had been decades of conventional wisdom. For decades, the police were warned about the effect equipment such as armored vehicles could have.

Otto Kerner Jr., former governor of Illinois and federal judge, chaired the commission that wrote the groundbreaking 1968 Kerner Report on racism in America. Months after the release of his report, Kerner wrote about the police response to the uprisings after the assassination of Martin Luther King, Jr.

“Armored vehicles, automatic weapons and armor-piercing machine guns are for use against an enemy, and not a lawbreaker,” he wrote. “If you come out with a show of force, you in a sense challenge the other side to meet you. Force begets force.”

But now, more than half a century after Kerner warned against their use, armored vehicles have become a normal occurrence in the arsenal of American police — ignoring the question of which came first.

“Armored vehicles are a very common tool used by law enforcement to protect officers and other citizens from gun fire,” Bygd, the Dunn County Sheriff, says in his email “… the reality is that I’m more concerned about one of my deputies being shot by a criminal.