Over 1,000 people take to their bikes to spread a message of social justice. 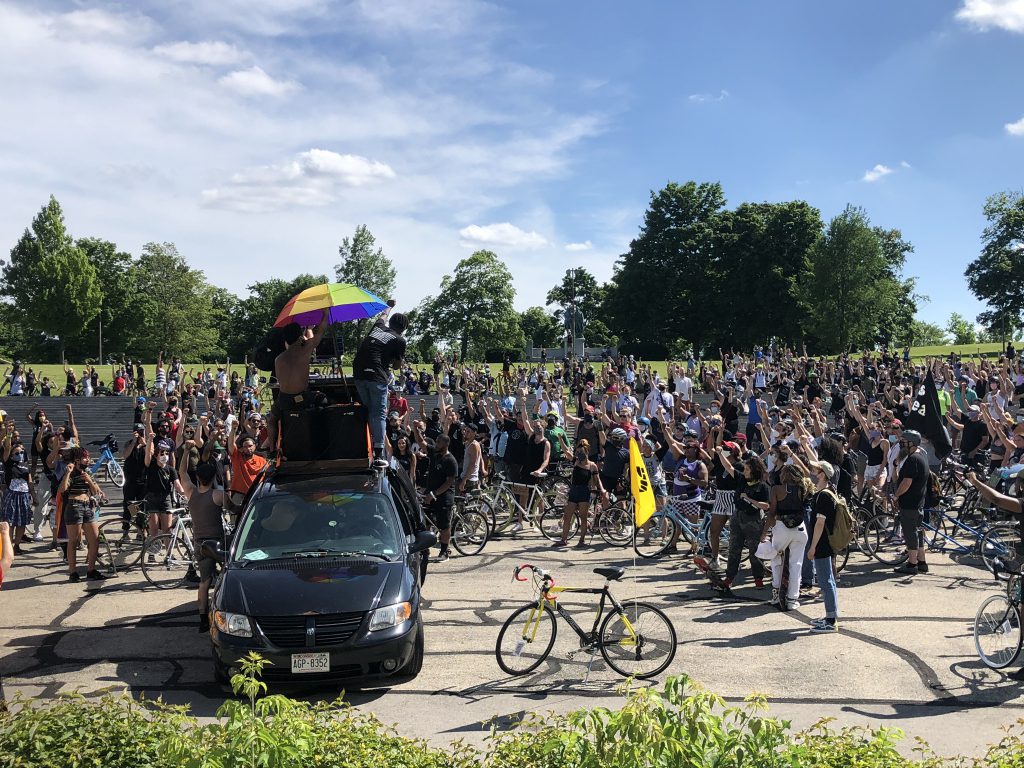 WebsterX (under umbrella atop the van, black shirt) leads the crowd at a Black is Beautiful ride in a chant at Washington Park. Photo by Jeramey Jannene.

Led by musical artist WebsterX, a crowd of over 1,000 rolled through Milwaukee on Sunday afternoon as part of a “Black is Beautiful” themed protest ride.

While much of the group was on bicycle, others rolled on skateboards, roller skates, motorcycles and a three-way mobility scooter.

The group started in Reservoir Park in Riverwest, heading west to rally at Washington Park before rolling south through Miller Valley and the Menomonee Valley and ultimately onto S. Cesar Chavez Dr. on the city’s South Side. From there the group went east through Walker’s Point and north through the Historic Third Ward, Downtown, the Lower East Side before rolling back into Riverwest. The group ended its ride with a pre-organized rally at Gordon Park that included Black-owned food vendors and rare-in-a-pandemic portable toilets.

And while the group engaged in plenty of chants, many led by Darius Smith who rolled in the back of a truck bed at the front of the ride, through its 16-mile slow ride, there was an overarching message of positivity for society, not just frustration with police practices.

But that doesn’t mean the organizers, including Smith, musical artist Zed Kenzo, WebsterX and his New Age Narcissism bandmate Lex Allen, don’t want to see change. “We are not going to stop until some real change happens,” said WebsterX before the group started rolling. When it ended he was encouraging others not to let this be the end of their activism.

The rapper, whose given name is Sam Ahmed, said today was a “mental health day for Black people” and he asked for those with black or brown skin to ride in the front. The decision reflected a change from the majority of the recent protest marches in Milwaukee where white marchers have been invited to the front in what other organizers have said is a bid to get better treatment from law enforcement.

But members of the Milwaukee Police Department were almost nowhere to be seen during Sunday’s ride, following a trend where the department has kept its distance from the marchers.

The rolling protest paused to let buses pass, split in half to allow a fire truck to get down Wisconsin Avenue and, in the rear, adopted a frequent refrain of “watch out, pothole.” DJ Mr. New York rolled atop a minivan playing music for the group.

The organizers sold Black is Beautiful t-shirts, raising over $10,000 that will be split between Walnut Way Conservation Corp. and Leaders Igniting Transformation (LIT). Wheel & Sprocket bike shop provided support throughout the ride and co-owner Noel Kegel was spotted riding with the crowd. Two other members of New Age Narcissism also rode with the group, Siren and Christopher DeAngelo Gilbert. Underwear Bike Ride leader Steve Roche provided assistance leading the ride and a host of volunteers offered water along the way.

Sunday’s ride, and marches held elsewhere in the city, marked the 24th day of protests against the killing of George Floyd by a Minneapolis police officer and other acts of police brutality. 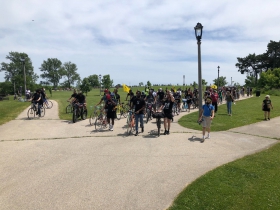 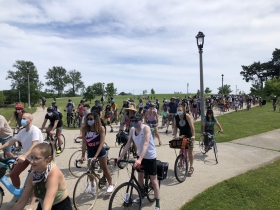 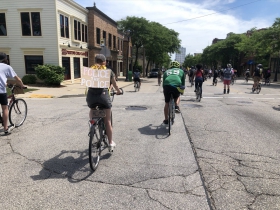 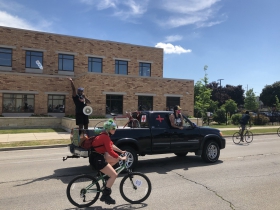 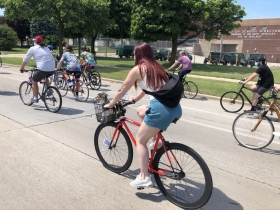 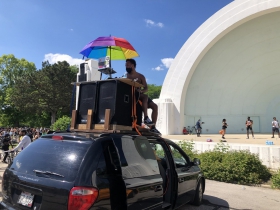