How did they operate in the city? How was that Blackhawk helicopter used?

By Isiah Holmes, Wisconsin Examiner - Jun 17th, 2020 02:39 pm
Get a daily rundown of the top stories on Urban Milwaukee 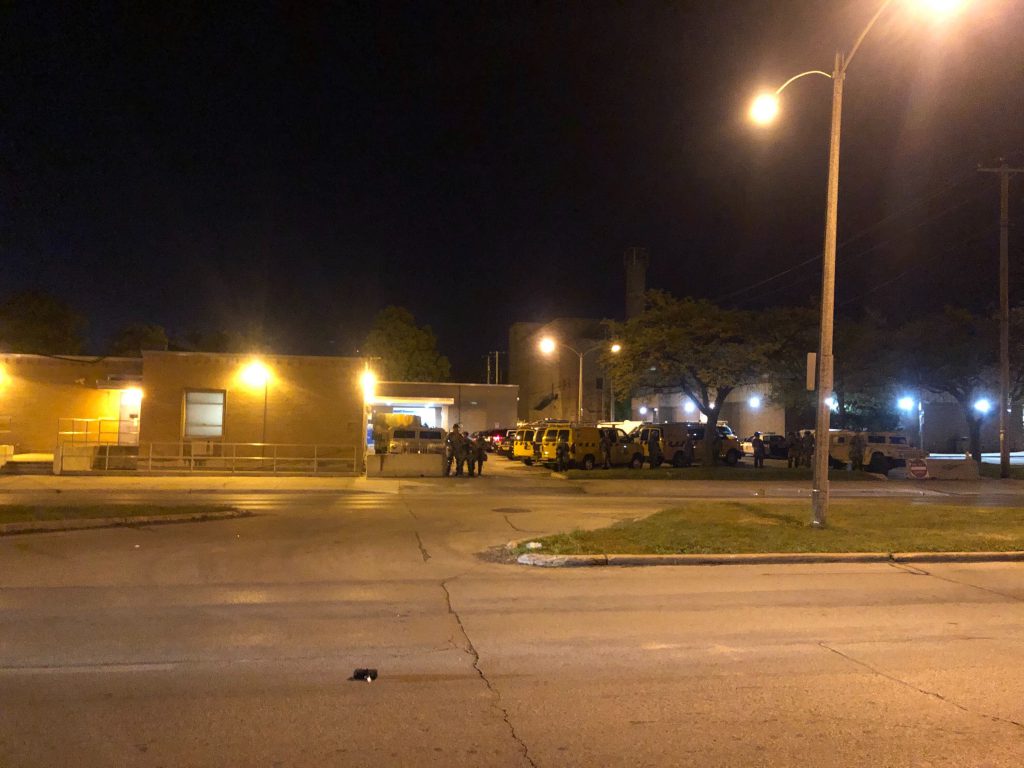 When Milwaukee joined cities across the country in daily protests of police brutality, marchers may have begun to regard riot-gear-clad officers as a familiar presence in reaction to the marches and rallies.

The National Guard, which was activated on May 30 to support police efforts and prevent property damage, however, was a new element that had not been seen at past protests. The Guard’s mission across the state concluded on June 9, yet many marchers may have lingering questions as to exactly what role the National Guard soldiers were playing.

As they traversed miles through the city, marchers could scarcely ignore the helicopters, drones and planes that circled overhead. Though sometimes present in the daytime, the flights always seemed to increase as night came to the streets. Still, due to the augmented presence of law enforcement, differentiating the military from police was challenging. 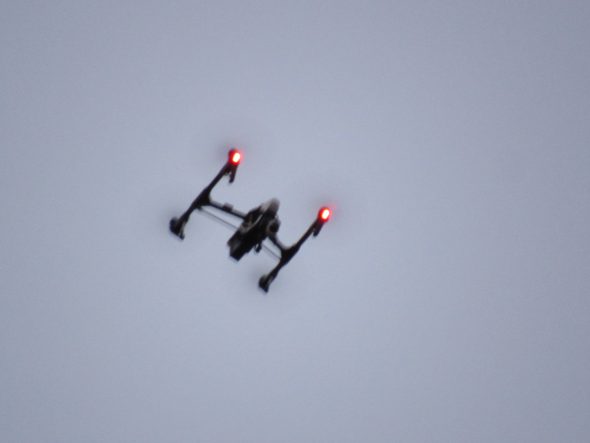 A drone hovered overhead on the first day of demonstrations. Photo by Isiah Holmes/Wisconsin Examiner.

Officers from various municipalities supported the Milwaukee Police Department’s (MPD) responses to the marches. Both the military and federal law enforcement had aircraft overhead. A 9 p.m. curfew, which was imposed for the first few days of protest, added to the anxiety.

Captain Joseph Trovato, a Wisconsin National Guard spokesman, said the Guard’s aviation support continued on a daily basis through the evening of June 5. In these sorts of cases, where citizen soldiers are supporting police, the Guard does not self-deploy.

In other words, Guard units were not operating independently from law enforcement in Milwaukee and other cities.

“We only respond when we have requests for assistance from civil authorities,” Trovato told Wisconsin Examiner, “and we support missions at their request. In some cases, we are supporting a local sheriff’s department, a police department or an incident commander. It varies from community to community, and situation to situation, but the Guard is never the lead authority in these sorts of situations, and we do not operate independently.”

Trovato notes that “we have units that are specifically trained to respond to instances of civil unrest, but we also build teams made up [of] troops from a variety of backgrounds to support these sorts of operations.” Although people may associate the National Guard with state-centric domestic situations, Guard members do occasionally have experience in combat theaters. The Wisconsin National Guard has been deployed to Afghanistan, Ukraine, the Middle East and other regions since 9/11.

In a situation where the Guard is assisting the police, Guard members abide by “rules for the use of force” rather than “rules of engagement,” which only apply to foreign combat situations.

“When called to State Active Duty,” explains Trovato, “members of the National Guard first follow an on-boarding process, which includes an in-person briefing from a Judge Advocate Officer on the Wisconsin National Guard’s Standing Rules for the Use of Force.” In civil unrest situations, explains Trovato, “Wisconsin National Guard members only serve with, in support of, and under the direction of, local law enforcement and remain subject to the Rules for the Use of Force.”

Guard members flew a UH-60 Blackhawk helicopter over the city, which marchers sighted. “It flew each night with the exception of one evening,” says Travato, “when weather grounded the aircraft.” While they were operating the helicopter, Travoto notes that they were not conducting the observation.

“The aircraft provided aerial observation for a member of the police department to observe traffic patterns, watch for threats to public safety, etc., in an effort to preserve public safety,” says the captain. “In fact, the aircraft did not employ any instruments or aids on board (i.e. infrared systems).”

Although the presence of the Guard may have been unfamiliar and felt ominous to some marchers, Travato hopes that additional information might  counteract that feeling and provide a better view of the efforts of the National Guard during Milwaukee’s protests.