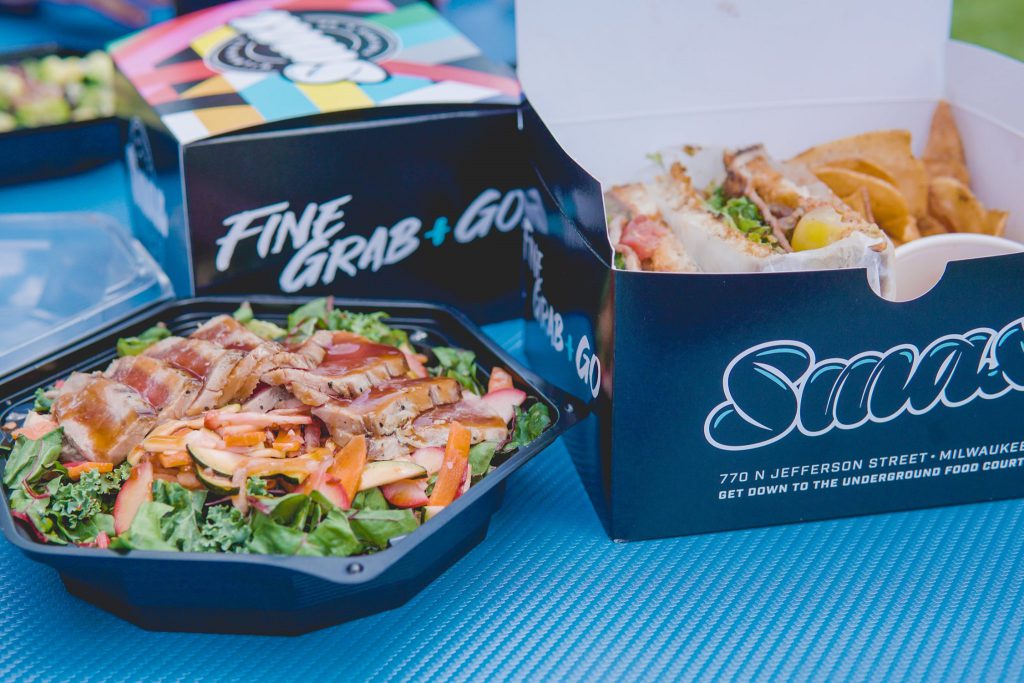 It’s a concept that was partly inspired by the television drama Mad Men — office employees in that show are often seen eating conveniently-boxed lunches at work.

“You never hear about that anymore — why can’t we have something that’s really good and full of flavor in one of these boxes and you just get one for your office,” says Smax co-owner J.D. Vanstockhausen. “I thought it was an awesome idea.”

Smax’s menu was developed with light and healthy meals in mind. The idea was that people wouldn’t go back to work after their lunch break feeling exhausted.

“We want to fill (our customers) up but not put them to sleep,” says Smax co-owner Maddie Irle. “We wanted it to be convenient so that (customers) could take the boxes back to their desk and it wouldn’t take up a lot of room.”

The boxed lunch business model is not only convenient for downtown office workers to eat on the go, but works well for the ever-changing COVID-19-related dining restrictions. Options include sandwiches, salads and bowls, which can be purchased at two portion sizes: a full-size portion for $10 or a half-size portion for $7. Orders can be mixed and matched — start by selecting a base. If you want to go the sandwich route, you have a variety of breads to choose from, which include the Canfora gunpowder bread — a bread specially baked for Smax by Canfora Bakery utilizing Vanstockhausen’s home-made Gunpowder Seasoning, a recipe he developed during his time as head chef at The Winchester. If you want to go the salad or bowl route, you can choose between heirloom lettuce or kale crunch salad or brown rice with a choice of beans. Next come sets of toppings, which include The Royal B.L.T. (candied English bacon, roasted red pepper, garlic and rosemary aoli, lettuce and tomatoes) and The Bahn Mi (seared Ahi tuna, crunchy kale slaw, house pickled vegetables and Smax Asian BBQ sauce) among others. If you choose to “Smaximize” you order, you can add a choice of dressings, dry rubs, sauces or vinegar and oil. And for an extra $3, you can upgrade your side of chips to the soup of the day, vegetables of the day or Smax Basement Corn — a spin on elote.

Smax and Vanstockhausen met through mutual friends and have crossed paths in the restaurant scene — Vanstockhausen still works as sous-chef at Jack’s American Pub, and has bounced around throughout his roughly six-year cooking career, and Irle is a full-time barber who has dabbled as a line-cook on the side. Originally, the pair purchased a food truck with intent to operate Smax solely on the streets. But they still needed a commercial kitchen in which to prep. As it turns out, the space at 770 N. Jefferson St. presented an opportunity to pivot their business model to a brick-and-mortar to-go restaurant.

“There’s a built-in lunch crowd — the food court is a well-known lunch spot,” Irle says. “Shah Jee’s has been there for 25 years, and that tells me that as long as you have a good product, you can make it (in that spot).”

For now, the food truck has been set aside, and Irle says they may utilize it in the future or end up selling it.

Vanstockhausen plans on rolling out new menu items weekly for the time being. He hints at a “Millie” sandwich — a Milwaukee-style Philadelphia cheesesteak. He’s also excited about the Smaxville Hot sandwich — a chicken sandwich that’s baked rather than fried and topped with chimichurri coleslaw and Vanstockhausen’s Gunpowder buffalo sauce. Smax will eventually roll out a delivery system as well as catering for groups of 10 or more and a “group meal” option that is designed for small office lunch breaks while avoiding the catering price tag.

Currently, Smax is only open Thursdays and Fridays from 11 a.m. to 2 p.m. But with a successful first two days of business (Smax sold 50 boxes while open for six hours), Irle says he’s happy with the way things are going, and will expand the restaurant’s hours as more businesses begin to reopen.