Governor says, "We must use this dark moment to begin to be an example for the rest of the nation."

By Erik Gunn, Wisconsin Examiner - Jun 5th, 2020 12:40 pm
Get a daily rundown of the top stories on Urban Milwaukee 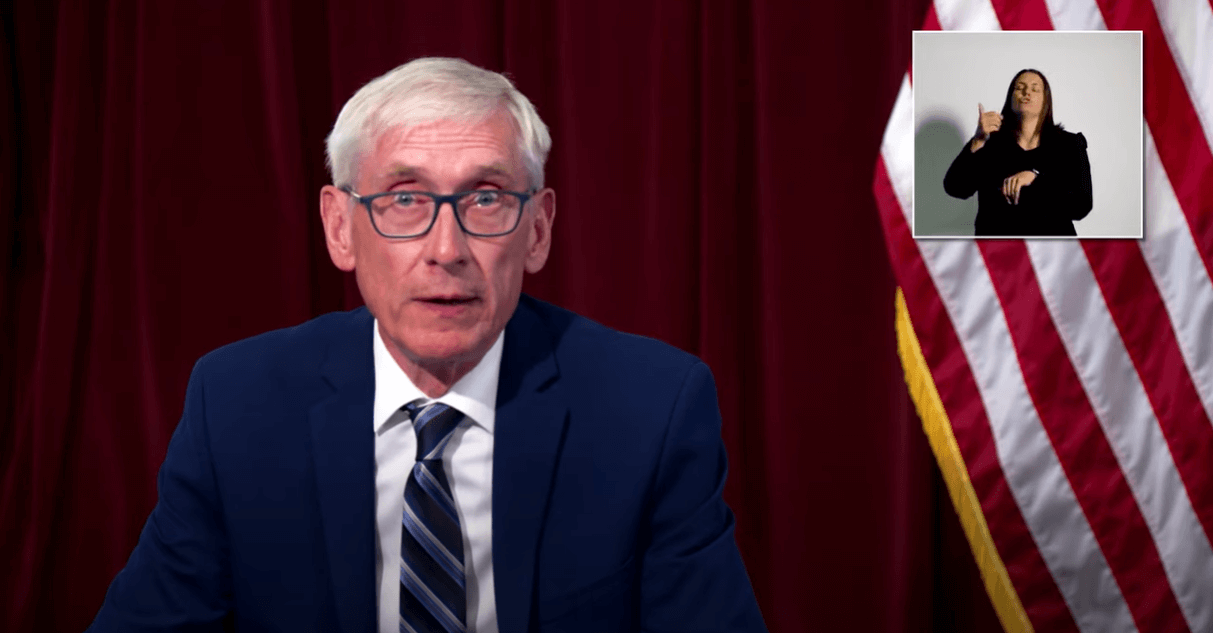 The regular briefings state officials hold to update the media on Wisconsin’s battle with COVID-19 are usually a mix of earnest public health reminders and upbeat encouragement for state residents to keep up  practices to help everyone stay safe and curb the spread of the viral illness that has put the world back on its heels for months.

On Thursday, Gov. Tony Evers took a different turn — pivoting to a list of statistics on health care and social conditions for which Wisconsin has the worst racial disparities in the nation, and tying that grim and unenviable record to  COVID-19’s unequal impact on the state’s black community and other communities of color.

Evers’ remarks Thursday expanded on his statement last week about the death of George Floyd in Minneapolis last month in police custody by an officer who pinned Floyd to the ground with his knee as the man gasped for air until he died.

“George Floyd’s death and the lives taken before him are symptomatic of the disease we’ve failed to adequately treat for four centuries,” Evers said Thursday. “Racism has never really gone away. It has only manifested itself in different ways from incarceration rates to health outcome disparities, a wage gap to housing, in transportation and in education inequities.”

The governor named the deaths earlier this year of Ahmaud Arbery in Georgia and of Breonna Taylor in Kentucky, of Eric Garner in New York City in 2014, and — as he has previously — of black Wisconsin men killed by police: Ernest Lacy, Dontre Hamilton, Sylville Smith and Tony Robinson. “These deaths are not anomalies,” Evers said.

And he nodded to the public outrage that has sent protesters into the streets around the world and across Wisconsin.

“We listen to the call and repeat, answered by generations of black voices who’ve marched before in these very same streets,” Evers said. “I’ve seen the hope in those who’ve joined this cause in peaceful protest, not only in Milwaukee and Madison but in Wisconsin towns like Sheboygan, Tomah, and Wausau…We must use this dark moment to begin to be an example for the rest of the nation. We must fix what we know is broken in our society. We must intentionally address and dismantle individual and systemic racism discrimination and bias.”

Evers reiterated his call for legislators to pass Assembly bill 1012, intended to sharply curb police use of deadly force and encourage stronger efforts at nonviolent resolution in their encounters with the public and urged local government leaders to support it as well. He later told reporters that his office has been in communication with legislative leaders to seek their cooperation.

But policing is not the only area in which systemic racism needs to be addressed, Evers said — and it was then that he returned to the briefing’s agenda, expanding its scope to encompass the impacts of racism on the health and wellbeing of the state’s African Americans and other people of color.

“We’ve seen its  effects in the disproportionate burden that people of color have born in this COVID-19 pandemic,” said Evers — accounting for 19% of COVID-19 infections and 25% of deaths in the state, while black people are just 6% of the state’s population. Hispanic people, he added, while 7% of the state’s residents, account for 34% of COVID-19 cases and 10% of deaths.

“These statistics represent real people whose lives have been affected by inequities that cause them to suffer disproportionately from chronic diseases like heart disease and asthma,” he continued. “The  same inequities increase their risk for COVID-19 and put their health in greater danger.”

Wisconsin, Evers said, “continuously ranks among the worst in the nation in disparate outcomes for marginalized populations.” As an example, he pointed to the state’s infant mortality rates. Among white babies, 5.2 of every 1,000 born die in the first year of life. For black babies, the rate is three times that: 15.7 per 1,000.

He renewed his longstanding campaign to get Wisconsin lawmakers to accept federal subsidies to expand Medicaid under the Affordable Care Act — which the Republican leaders of the state Legislature have to date repeatedly refused to do — and called it “one of the most important ways we can help address these racial disparities in health outcomes.”

Citing a 2019 state Department of Revenue study that calculated Wisconsin residents pay more than $1 billion a year toward Medicaid expansion in other states, he added that, “expanding Medicaid makes good financial sense, too” because it would stretch state dollars farther as local governments and businesses were struggling in the pandemic economy.

But “we can’t focus solely on healthcare and health outcomes,” Evers continued. “Racism itself is a public health crisis, one that impacts every facet of our life.”  One in three black children in Wisconsin lives in poverty — a rate that is 3.5 times higher than for white children, he said. Black Wisconsin residents are 11 more times likely to be in jail or prison than white residents.

Job disparities are the worst in the nation, with 61% of black adults ages 25 to 54 employed compared with 85% of white adults, and black unemployment three times that of whites, Evers continued. The median income for African American households is $29,000 a year; for white households, it’s twice that: $59,500. Where 70% of the state’s white families own their own homes, just 27% of black families do.

“These statistics are sobering and they are devastating,” Evers concluded. “Just like we cannot look away from police brutality and the killing of black men and women, we cannot look away from the reality that inaction, indifference and institutional racism has harmed generations of black and brown Wisconsinites. This cannot be who we are any longer. We must act, and act now.”