Lessons from the Spring 2020 Election

Are there lessons for Republicans—and President Donald Trump—in this year’s Wisconsin spring election for state Supreme Court? In the April election, challenger Jill Karofsky easily defeated incumbent Justice Daniel Kelly by a vote of 855,573 to 693,134 (55.2 percent to 44.8 percent). Although Wisconsin Supreme Court races are officially non-partisan, Karofsky was supported by liberals and Democrats and Kelly by conservatives and Republicans, including Trump.

This contrasts sharply with the outcome one year earlier. In that race, liberal Lisa Neubauer lost to conservative Brian Hagedorn by 600,433 to 606,414, a difference of just under 6,000 votes. What accounts for this difference?

The explanation offered by former governor Scott Walker and other Republicans was that the presidential primary in 2020 caused a surge of voting by Democrats eager to weigh in on who would be the Democratic nominee. They argue that the outcome was the result of unique circumstances and has little relevance beyond that particular race.

As I pointed out in a previous Data Wonk column, there are reasons to doubt this conclusion. First, by the time of the primary Joe Biden was the likely nominee and it was unlikely that Wisconsin would change that.

Secondly, if the opportunity to participate in the Democratic presidential primary drove turnout, you would expect the effect on turnout to be stronger in heavily Democratic counties than in Republican ones — and that didn’t happen.

The chart below compares the increased turnout in each county (on the vertical axis) to the county’s partisan bent, as measured by the 2019 vote. Moving from left to right, the counties start at overwhelmingly conservative and become increasingly liberal as one moves to the right. However, increase in turnout hardly budges. Across the partisan spectrum, average turnout increases by around 30 percent. 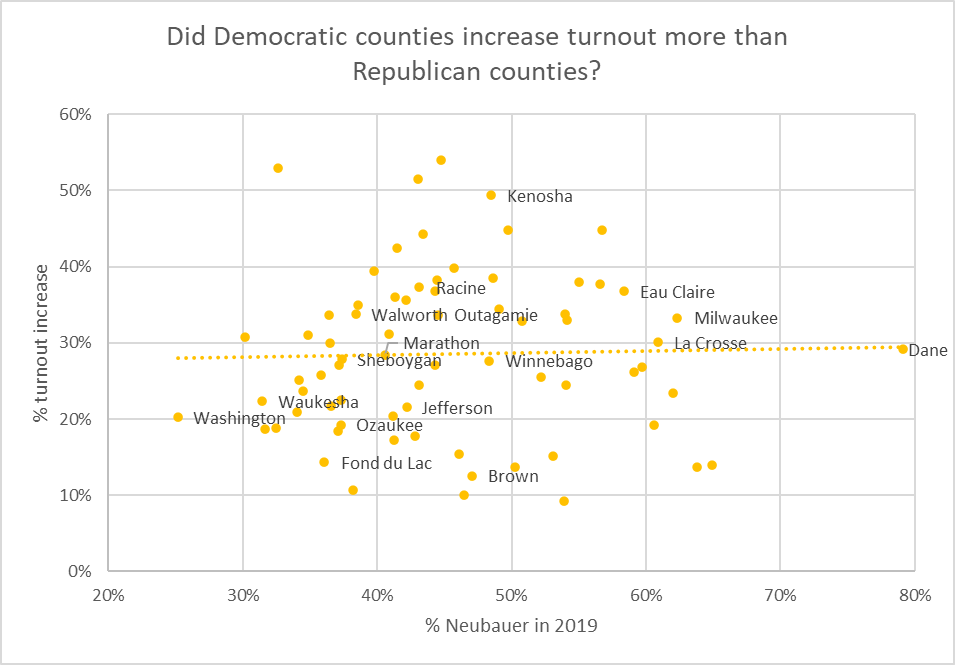 Looking at the change in the percent of the vote that was liberal between 2019 and 2020 gives a quite different picture. As the next plot shows, the more conservative the 2019 vote was in a particular county, the greater the percentage increase in the liberal vote in 2020. 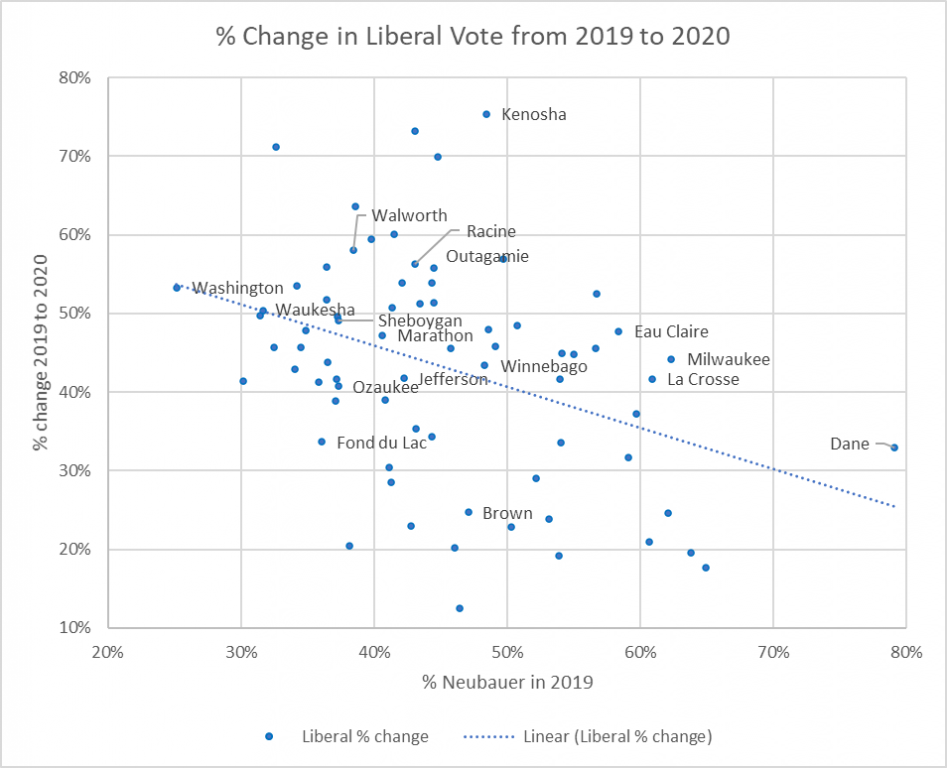 This effect is particular striking with the three very conservative Milwaukee suburban counties Waukesha, Ozaukee, and Washington. In Waukesha County, for instance, the liberal candidate got a 50 percent increase in 2020 compared to 2019. For comparison, the conservative candidate received a 10 percent increment.

This does not imply that the “WOW” counties are about to flip. In part, the high percentage increase reflects a lower starting point for the liberals. 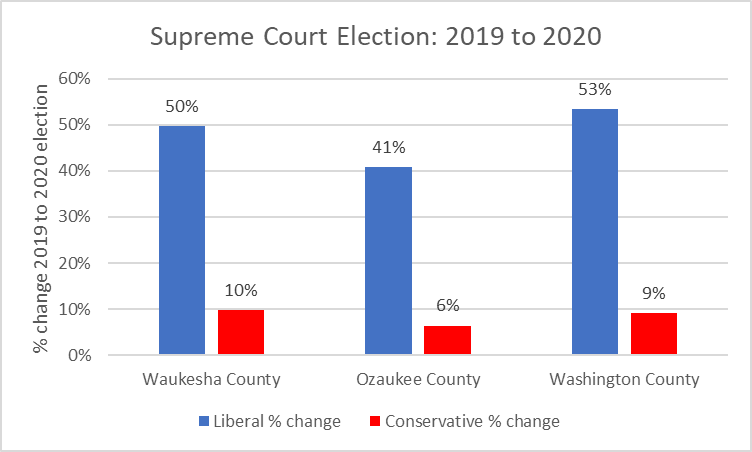 To further explore the factors that helped determine the outcome of Wisconsin’s spring election, I used multiple regression to model the results. More details are shown in the Appendix at the end of this article.

Most surprising, perhaps is the first of the three variables: the more conservative the county the more the improvement in the liberal vote. Although surprising, this result is consistent with the scatter plot comparing the change in liberal vote to the counties’ partisan orientation.

I used the same model to predict the increase in the vote for the conservative candidate. In this case, the first variable (the county’s partisan orientation) had no effect and the use of absentee ballots a negative effect.

The first lesson for Republicans, resulting from this analysis, is that it is dangerous for the Republican Party to become the party attempting to force people to vote in person in the midst of a pandemic. And yet Trump, like Robin Vos and Scott Fitzgerald, appears awfully cavalier about voters’ safety.

A Politico article reports that the Republican National Committee and Trump reelection campaign are doubling their legal budget to $20 million as litigation attempting to prevent voting by mail spreads to an array of battleground states.

Trump’s pair of tweets that started, “There is NO WAY (ZERO!) that Mail-In Ballots will be anything less than substantially fraudulent.” led Twitter to respond with a link to information refuting his claims under the headline “Trump makes unsubstantiated claim that mail-in ballots will lead to voter fraud.” This, of course, has led to claims on the right that Twitter is practicing censorship.

After her loss in 2019 to Brian Hagedorn, Lisa Neubauer returned to her job as chief judge of the Wisconsin Court of Appeals and a member of that court’s District II. She also had to face reelection in that district the following year.

District II consists of most of the counties in southeast Wisconsin except for Milwaukee County, including the very conservative Milwaukee suburbs. In fact, while she came within 6,000 votes of winning statewide, only 37 percent of District II voters supported her for Supreme Court.

That led Republicans to think they could beat her when she ran for reelection this spring for the Appeals Court seat. A Journal Sentinel article reported that “Conservatives must smell blood in the water around Court of Appeals Judge Lisa Neubauer.” A later article quoted her opponent Paul Bugenhagen Jr saying, “We looked at the numbers. She didn’t win a single county she represents” in the 2019 race for Supreme Court.

Yet when all the votes were counted in the April election, Neubauer won with 54 percent of the vote in the Court of Appeals race, as shown below. In that same election, Jill Karofsky got 44 percent of the District II vote while winning statewide in the race for Supreme Court, which was 7 percent higher than what Neubauer got in 2019. 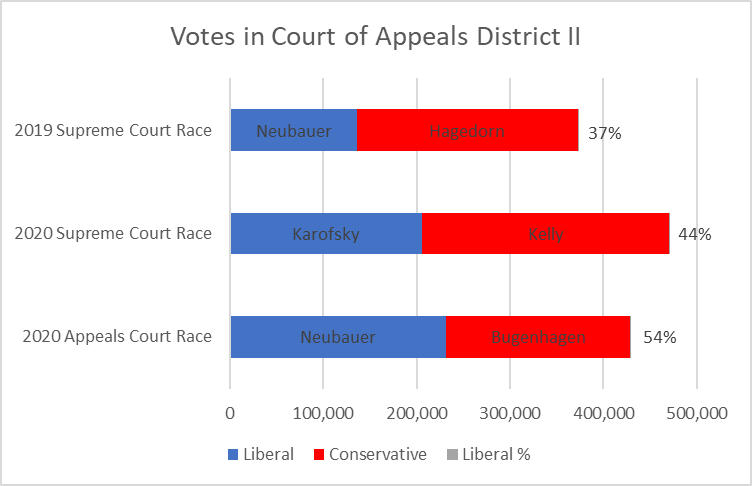 President Donald Trump and I are in complete agreement: Wisconsin needs Justice Daniel Kelly on its Supreme Court to defend the rule of law. … On April 7th, Justice Kelly will square off against a liberal activist judge who will get a big boost from liberal specialist interests who have a special interest in Wisconsin in 2020. … The liberals know that if they can win the Supreme Court election, they will seize the early momentum in this big election year. They are going all in on their liberal candidate in the hopes of undoing the conservative reforms that moved Wisconsin forward.

It appears that Wisconsin’s spring election shows the limits of two kinds of strategies that have been widely used by Republican operatives: using claims of potential fraud as an excuse to make voting more difficult and turning judicial races into a question of ideology. The fact that both seemed to fail in this case is a hopeful sign for the future for Democrats.

To further explore the factors that helped determine the outcome of Wisconsin’s spring election, I modelled the variables using multiple regression. I used three independent variables:

Using multiple regression, the equation for the percentage increase in the vote for the liberal candidate in 2020 compared to 2019 was:

The coefficient of determination was .86, meaning that the equation accounts for 86% of the variation in the increase in the liberal vote among counties, a surprisingly strong result in my view, especially considering the amount of scatter in the county data.

Here is the equation for the increase in votes for the conservative 2020 candidate:

The coefficient of determination was .89. In this case, the percentage conservative of a county’s 2019 vote did not have a statistically significant effect. However, the percentage voting absentee had a negative effect.

One thought on “Data Wonk: Lessons from the Spring 2020 Election”