Many voters in red counties opposed him, perhaps in anger at being forced to vote in a pandemic.

The Republican legislative leaders, Assembly Speaker Robin Vos and Senate Majority Leader Scott Fitzgerald, insisted on an in-person election during a pandemic, apparently hoping this would help elect conservative Dan Kelly to the state Supreme Court. Instead Kelly lost to Jill Karofsky by more that 163,000 votes. So what happened? Let’s crunch the election data for answers.

Many voters used absentee ballots in order to avoid attending the polls in person and possibly transmitting or receiving the virus. But which counties did it more? 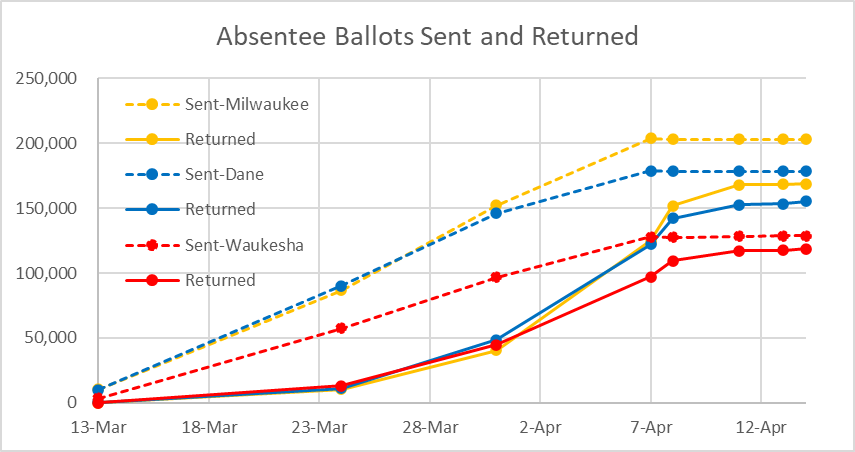 Under Wisconsin law, ballots received after the election date of April 7 would not be counted. Yet, as the graph shows, they continued to arrive. Without the intervention of a federal judge, these votes would have been rejected.

The next graph shows how the percentage of these last-minute absentee ballots varies from one county to county. Statewide, these late ballots made up about 10 percent of all absentee ballots, as they do in Milwaukee County. This graph includes the ten largest counties. To this group, I added Ozaukee as the third of the “WOW” (Waukesha, Ozaukee, and Washington) solidly-Republican Milwaukee suburbs. Dodge County was added because it covers much of Fitzgerald’s state senate district. The lowest percent of last minute ballots, 6.4 percent, was in Dodge County. 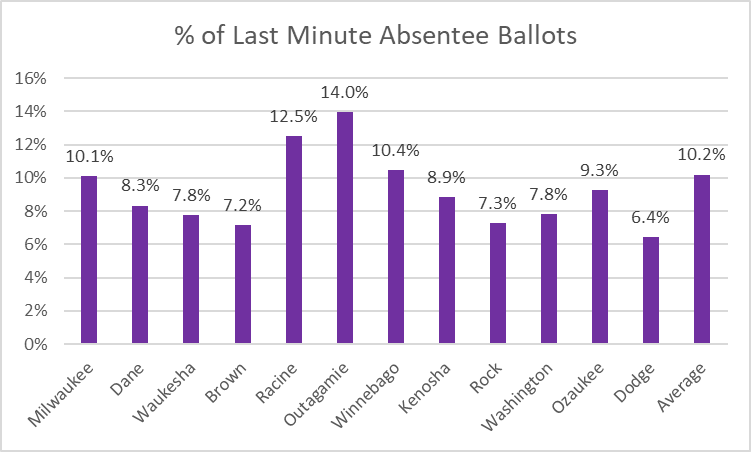 Who chose absentee voting? Listening to Fitzgerald or Vos, one would get the impression that the move to absentee voting is a plot by Democrats to somehow cheat Republicans out of their rightful victories. In this, they echo Donald Trump.

But, as can be seen below, the best predictor of heavy use of absentee voting is how urban a county is, not how Democratic. For instance, all the counties with absentee voting below 50 percent have fewer than 20,000 people. The more interactions there are between people, the more quickly the coronavirus can spread and the more people preferred to vote by mail. 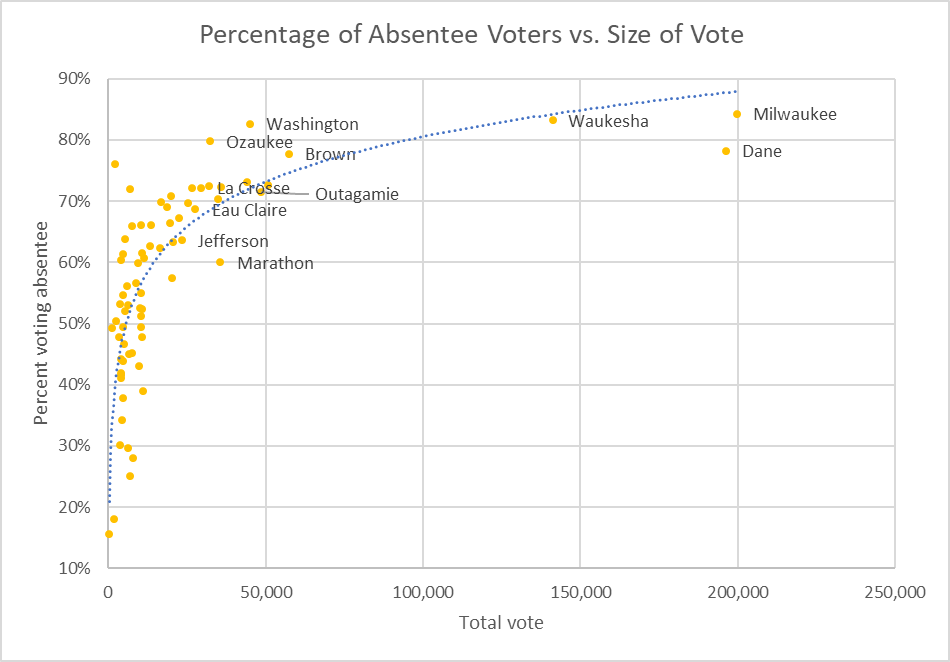 Percentage of Absentee Voters vs. Size of Vote

This result is consistent with the next graphic. Democratic Milwaukee County and its three Republican suburbs (Waukesha, Ozaukee, and Washington counties) had the highest rate of absentee voting in Wisconsin. (These numbers are calculated by comparing the election commission’s number of absentee ballots received from voters for April 14, to the total vote count as reported by the New York Times. Thus, the numbers may be slight overestimates depending on whether some of the absentee ballots were subsequently rejected.)

That said, a recent New York Times study found that in Wisconsin communities that counted mail-in ballots separately from election day voting, the mail-in vote was substantially more favorable to Karofsky. In a Marquette Poll taken two weeks before the election, 83 percent of voters who describe themselves as strongly liberal said they are very worried or somewhat worried about the coronavirus, compared to 54 percent of those who say they are strongly conservative. 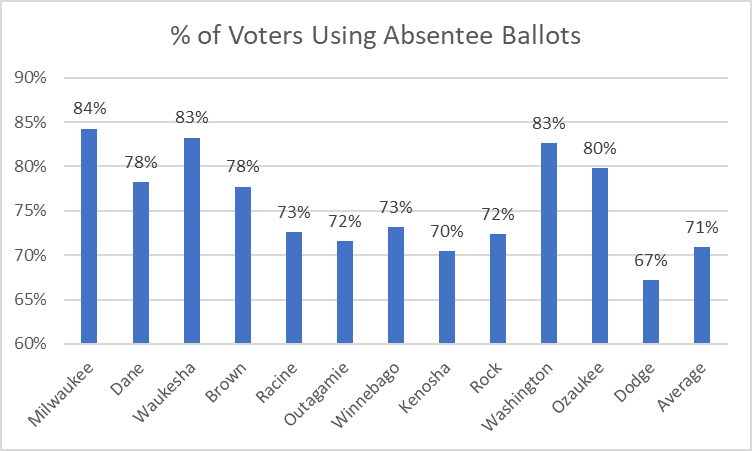 Is the result explained by Democrats turning out to help choose their next presidential nominee? Several years ago, Republican leaders looked at the calendar and made an alarming discovery: Kelly, an appointee of then-governor Scott Walker, was scheduled to face election on the same day, April 7, 2020, as the presidential primary.

They feared that Kelly would have an uphill climb because a competitive presidential primary would draw Democratic voters. One of the laws passed in the lame duck session would have reshuffled the spring election schedule to separate the presidential primary from the Supreme Court election. This effort to add a third spring election floundered because there was no way to shoehorn in a third election.

However, the argument that the presidential primary would skew the results has made something of a comeback recently in light of Kelly’s defeat. Former governor Walker recently explained Kelly’s poor showing as the result of high turnout by Democrats wishing to choose their presidential candidate.

This explanation is plausible, but is it supported by data? In 2019, Wisconsin also held a spring election which included choosing a Wisconsin Supreme Court justice. Like the 2020 election, although nominally nonpartisan, the election of justices has become highly partisan. As the next chart shows, counties that supported Lisa Neubauer, considered the liberal in 2019, also tended to go for Karofsky in 2020. 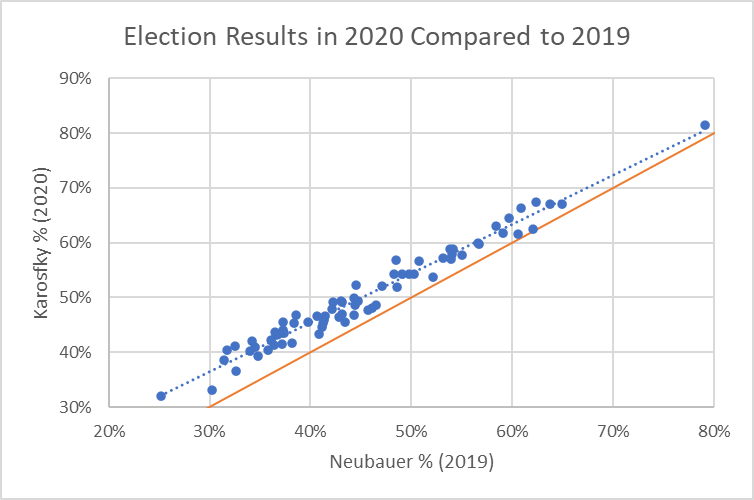 The data show two big changes between 2019 and 2020, however. 342,458 more people voted in 2020 and a higher proportion of those voted for the liberal candidate in 2020 than in 2019. This explains why the dotted trend line is above the rust-colored diagonal.

The next chart compares the percentage increase in turnout from 2019 to 2020. On average turnout grew by 30 percent. If the increase were driven by a desire to participate in choosing the Democratic presidential primary, I would expect turnout to grow more in counties dominated by Democrats (those on the right of the chart) than those dominated by Republicans. Instead, the trend line is essentially flat. 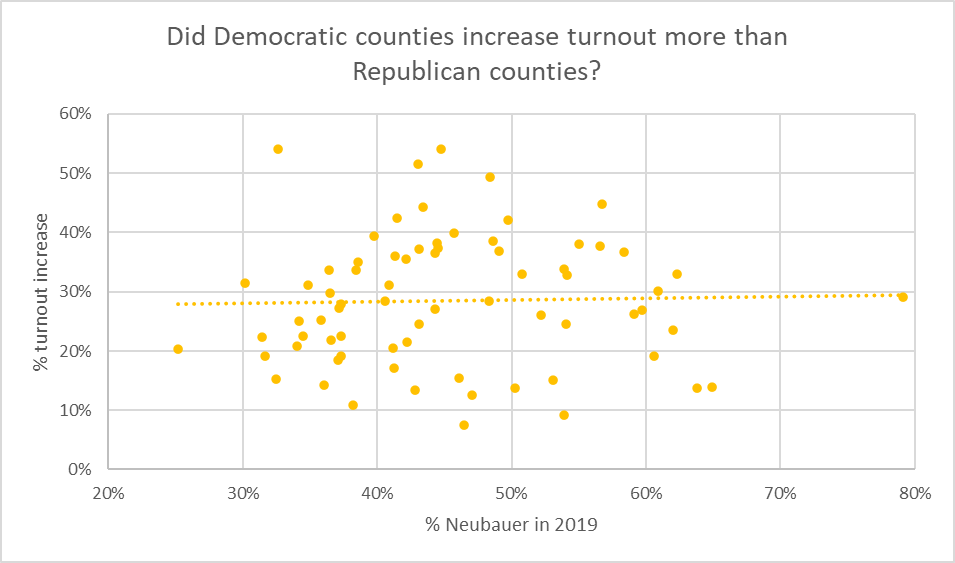 The next chart compares the percentage change in votes for the liberal candidate (in red) to the 2019 Neubauer vote. Note that conservative counties on average actually had higher percentage shifts to the liberal candidate than liberal counties. To some extent, this can be explained by the smaller number of 2019 liberal voters, but there is no similar trend of higher conservative growth in liberal counties. 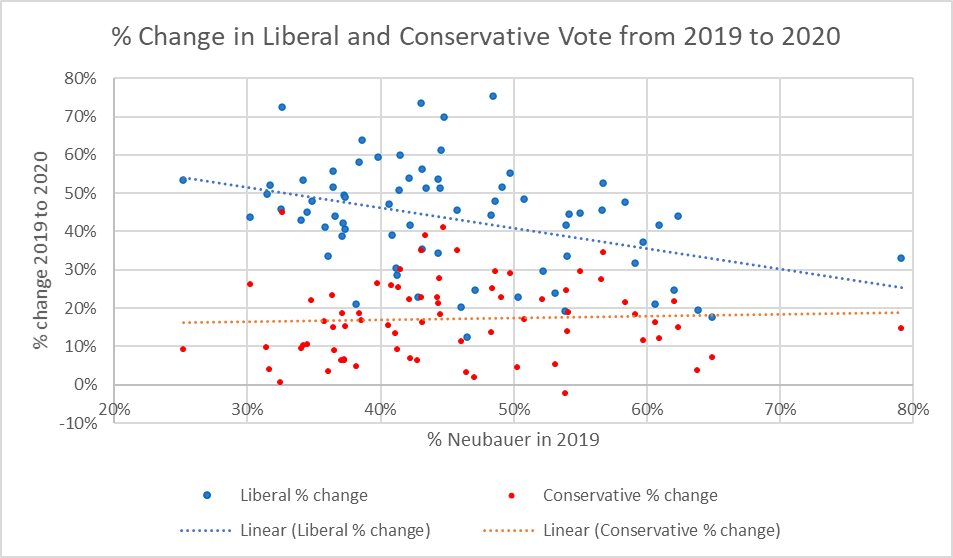 Percent Change in Liberal and Conservative Vote from 2019 to 2020

Writing after election day but before the votes were counted, Paul Waldman began his column: “To call what’s happening in Wisconsin right now a ‘stolen election is perhaps too mild a description.” Likewise, E.J. Dionne started by saying “Now we know, thanks to what happened in Tuesday’s election in Wisconsin, that Republican politicians will freely use the coronavirus pandemic to tilt electoral outcomes in their favor by obstructing access to the ballot …”

Certainly, Republican politicians like Vos and Fitzgerald have benefitted from voter suppression, making it harder to vote for people likely to vote Democratic. But in refusing to consider legislation to delay the election until everyone who wanted to vote remotely could do so, did they overplay their hand?

Lacking an exit poll in which voters are asked why they voted one way or another it is hard to say for sure. My guess, however, is that much of the election result reflected voter anger at an election that forced them to choose between being disenfranchised and waiting in long lines and running the risk of attracting a nasty illness. And if not by them, then by their friends and family and neighbors.

Who could they vent that anger on? The Republican state Legislature was the most immediate cause of the pain and danger the election inflicted on the voters—particularly in the person of Vos and Fitzgerald, who seemed to be calling the shots. However, both Vos and Fitzgerald are in safely Republican districts (that Walker won by almost 20 points), thanks to gerrymandering, so the prospects of punishing them were remote.

Conservative majorities on both the federal and state Supreme Courts shot down plans that eased the dangers caused by the Legislature’s nonaction. But the federal justices were appointed for life and the next election for state justice is scheduled for 2023. So voters couldn’t take it out on them.

That leaves Kelly as the nearest available target for that anger. In fairness, Kelly abstained from the court’s decision to reject Evers’ executive order to delay the election and move it on-line. However, it is not a stretch to believe that he would have joined the majority if he could have. After all, the justices voting to shoot down the order were his allies.

Kelly may lost because of such decisions — by the state Supreme Court, Vos and Fitzgerald — which forced voters to risk their lives to vote.