John Menard and Trump, Together Again 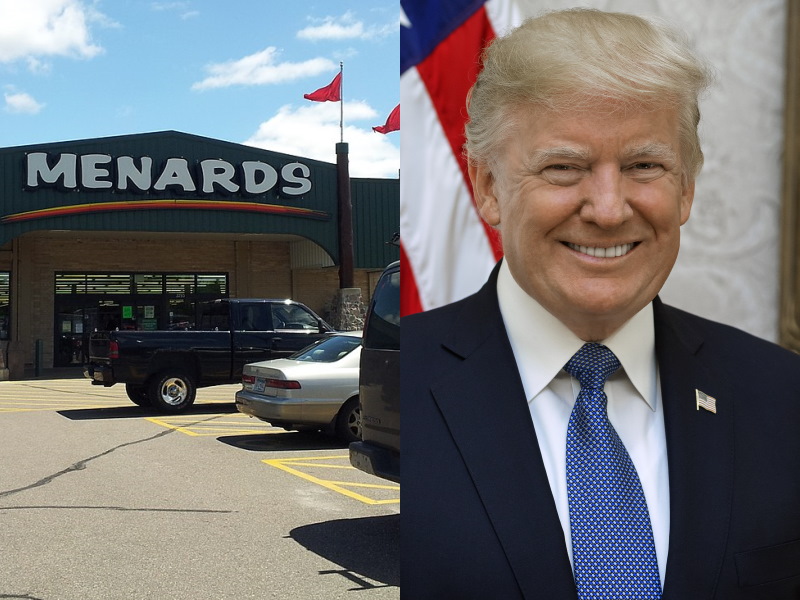 Once upon a time John Menard, the mega-billionaire owner of the Wisconsin-based hardware chain, was a a good buddy of Donald Trump.

Through Hilbert, who had partnered with Trump on the purchase of the Manhattan’s iconic General Motors Building in 1998, Menard got to know Trump. Hilbert and Menard socialized together with Hilbert’s wife Tomisue and Menard’s then-fiance Deb Sands at Hilbert’s lavish home in St. Martin and at Trump’s estate in Palm Beach, FL.

In those cozy times involving the three couples, Trump joined Menard in donating to the Wisconsin Club for Growth, the conservative dark money group that spent millions of dollars to help GOP Gov. Scott Walker and Republican state senators win their 2011 and 2012 recall elections. Menard gave $1.5 million and The Donald gave just $10,000 to Walker.

But in 2013, the partnership of Menard and Hilbert fell apart and Menard was accused by Tomisue Hilbert of groping and sexually harassing her, in one of the many suits and counter-suits by Menard and Hilbert. Trump’s wife Melania Trump got caught in the legal cross-fire: she had worked closely with New Sunshine, a holding company created by MH Equity to market a line of high-end luxury skin products. But after gaining full control of the equity fund (through a friendly Wisconsin court ruling), Menard then sent a letter to the Trump Organization canceling the contract with New Sunshine. Melania Trump in turn filed a $50 million claim for damages against Menard.

Naturally, this meant Donald Trump had to start tweeting nasty things about Menard, like this riposte: “John Menard of Menards home improvement stores in Midwest treats employees horribly — should they form a union?”

But Melania Trump won the day, as a federal judge in Indianapolis ruled that she “had a valid contract to develop, market and sell skin-care products” and “can proceed with an arbitration hearing in New York where she was seeking up to $50 million in financial damages,” as the Indy Star reported at the time.

At that point the dispute disappeared from the media, the anti-Menard comments by Trump ended and whatever agreement was worked out by the lawyers for Menard and the Trumps has never been reported.

Since then things have warmed up between Menard and Trump.

In April 2016, just two weeks after Menards was found in violation of federal labor laws, the company announced it would delay building a new store in New Philadelphia, Ohio, until President Barack Obama was replaced by a president the company liked better. Jessie O’Mara, a spokesperson for Menard Inc. noted that “We are a family owned business and with the Obama Administration scaring the dickens out of all family businesses in the U.S.A at present and with no certainty if the next administration will be any better, we have decided not to risk expansion until things are more settled.”

To help assure more friendly politicians were elected, 97 percent of the company’s political donations in 2016 went to Republicans, according to Open Secrets. And the election of Trump brought in an adamantly anti-Obama president who proceeded to eviscerate federal labor protections and those of the Environmental Protection Agency, which was good news for Menard, who had a history of more environmental violations and fines levied by the state Department of Natural Resources than any other Wisconsin company.

In May 2019, auto racer Simon Pagenaud and Team Penske, sponsored by Menard’s, won the Indy 500, and President Trump, who sees NASCAR fans as a key part of his base, invited the entire Team Penske to the White House. John Menard was on hand for the celebration.

And last month Trump announced the list of “esteemed executives, economists, scholars, and industry leaders” who together will form the “Great American Economic Revival Industry Groups and “work together with the White House to chart the path forward toward a future of unparalleled American prosperity.” The list of esteemed business leaders included John Menard.

Yes, it appears the bad old days of their feud are long gone, and Donald Trump and John Menard are working together again.

For the more on Menard see our story, “The Strange Life of John Menard.”

2 thoughts on “Back in the News: John Menard and Trump, Together Again”