Crowley Sworn In As County Exec 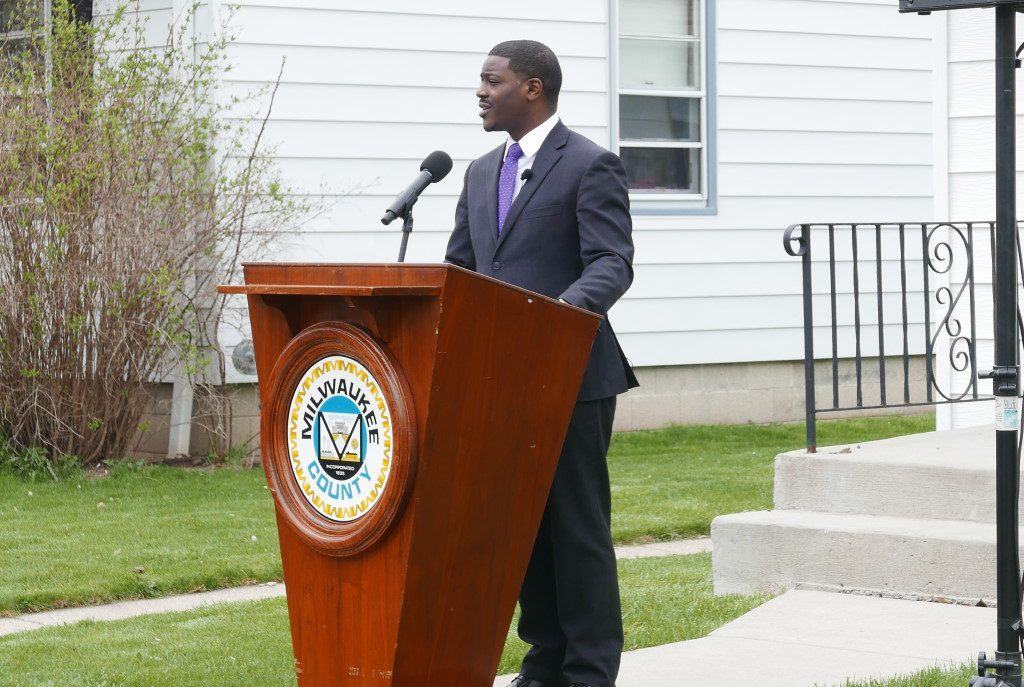 David Crowley speaks at his swearing in ceremony. Photo by Graham Kilmer.

New Milwaukee County Executive David Crowley was sworn in Monday morning outside of his home in the Nash Park neighborhood.

Officiating at the ceremony was Wisconsin Court of Appeals Judge Joe Donald. The judge told Crowley: “I want to congratulate you on the historic election. We need your focus, drive and resilience. And so I’m looking forward to all the great things to come.”

After being sworn in, Crowley delivered a speech, and before anything else, he thanked the voters.

“You braved confusion, long lines, bad weather and a global pandemic to make sure that your voice was heard. So many people tried to stop you, yet you still voted. There’s nothing more patriotic and American than that.”

Crowley officially became the first African-American to be elected as Milwaukee County Executive in the 60-year history of that office, making this an historic event in the history of the county. Said Crowley: “Not just the symbolism, but the responsibility that comes with being the first is something I am very keenly aware of.”

Crowley replaces former County Executive Chris Abele, who attended Crowley’s swearing in Monday, and applauded the new county executive.  Crowley certainly has the support of the former county executive. A third party organization funded by Abele spent many thousands in support of Crowley during the election cycle.

Crowley grew up in Milwaukee’s 53206 zip code, an area unfortunately well known for poverty and a massive rate of incarceration for black men. Crowley has said that he moved around a lot when he grew up, often moving because of evictions. Crowley ultimately graduated from Bay View High School and went on to attend UW-Milwaukee.

During his speech Monday, Crowley said he remembers learning about local civil rights icons like Vel Phillips, Ezekiel Gillespie and Lloyd Barbee. He said, “I was in grade school so the enormity of what those leaders did then were lost on me, but it is not lost on me now.”

He invoked a line from Dr. Martin Luther King, Jr., who famously said, “The arc of the moral universe is long but it bends towards justice.” Crowley noted the civil rights leaders he learned about in school and said they, and “many, many” others bent the arc a little more towards justice. And now, Crowley explained, he feels like it’s his turn: “I am honored and humbled to have the opportunity and the responsibility to continue the hard work of bending the arc towards justice.”

Crowley has served for the past four years as a state representative, representing the 17th district. Now he assumes leadership of the county during a global pandemic. One that has had a disparate impact on the African-American community and those living in poverty.

Being African-American, Crowley said he understands the symbol he represents for many in his new role. “But the time we’re now in calls for more than just symbolism. We’re facing an unprecedented crisis. The very mortality of our community is at risk.”

“The challenge in front of us is to make sure that the health of our citizens is paramount and that as we reopen our economy, we do all we can to get people back to work and rebuild what was lost.”

Because communities of color have been hit harder than anyone in Milwaukee County during this pandemic, Crowley noted, this has further highlighted the effects of “poverty, and decades, upon decades of institutionalized bias.”

Crowley also noted his commitment to pushing for a greater share of revenue for Milwaukee from the state, considering that Milwaukee County has been sending increasingly more revenue to the state  over the last decade while the revenue it’s gotten back has declined in real dollars.

Crowley said his administration would create a new Office of Special Projects and Grants “to find every possible dollar we can” in the public and private sectors.

Crowley ended his speech saying, “By the time I leave office, we will give voice to those that can’t speak for themselves. We will remove barriers and lift the burdens of those seeking a life of dignity.”

And, he pledged to address the issue of Milwaukee being one of the most segregated counties in America, promising to work for change on that front.

2 thoughts on “MKE County: Crowley Sworn In As County Exec”