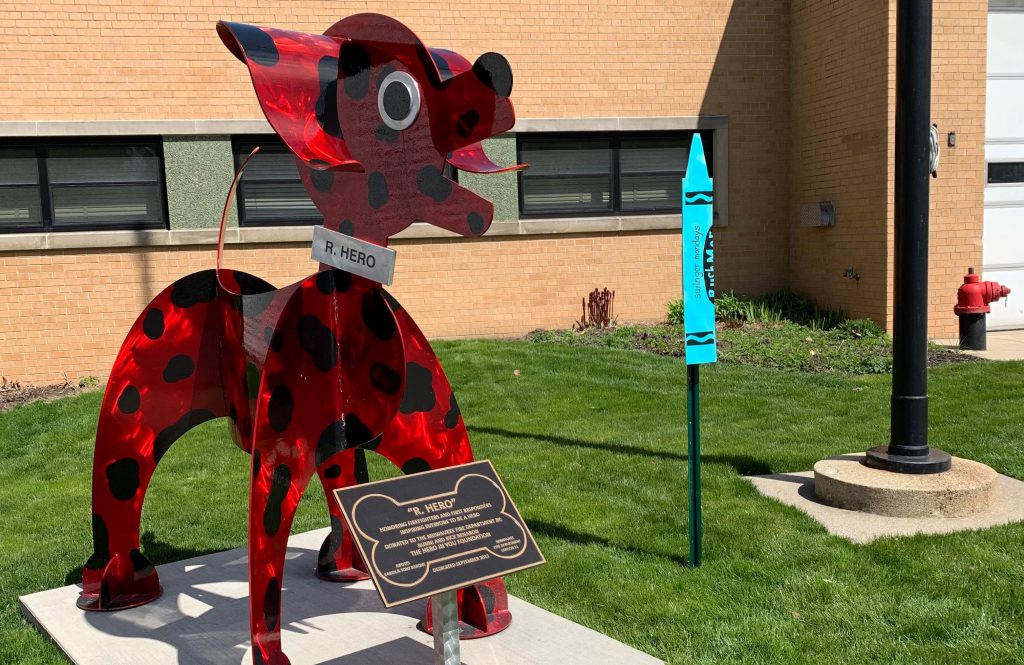 Looking for something to do with the kids? Searching for an excuse to get out of the house? Need a reason to get a little fitness? Rush Mor Records in Bay View has you covered.

The locally-owned record shop has installed 64 large crayons around the southside neighborhood and produced a free scavenger hunt to help you find them.

“This free, all-ages, 24 hours a day-friendly activity is designed for all of us that find ourselves walking the dog aimlessly, burning out on media, suffering from cabin fever, or just simply bored out of their skulls,” said the record shop in launching the social-distancing-compliant contest.

Known as the Bay View Adventure Club, you can pick up the clue sheets outside the store at 2635 W. Kinnickinnic Ave. or print your own copy from rushmor.com.

Why would a scavenger hunt created by a record store use crayons instead of album covers? “I think they’re universally relatable. They harken back to more innocent times in everyone’s lives. Even if you grew up to be a chef or a mechanic or a lawyer, everyone colored as a kid at some point. From a practical standpoint, they’re easily recognizable and are a very simple shape to mass produce,” said Rush Mor co-owner Bill Rouleau.

The large crayons, located in windows, doors or positioned as freestanding signs, can be spotted around the neighborhood. They’re all located south of the Kinnickinnic River, north of E. Holt Ave., east of S. Chase Ave and west of Lake Michigan. Clues range from the easy, “BV’s chillest spot in summertime,” to the cryptic, “the clue to end all clues.” In between is a mix of history, pop culture and current events.

Answers for the clue sheet are the cleverly-worded color names found on the crayons, including “Toni’s Moody Blue” and “Ted Perrywinkle.”

What’s with the names of some of the colors? “It allowed me to pay my respects to the people and things in the neighborhood that inspire me, and also allowed me to shine a light on other businesses that I was not able to include in the 64 spots. There’s a few inside jokes that were the result of hours of sitting alone painting too,” said Rouleau.

He said the inspiration for the game came from a customer’s question about a record the business was selling. “I immediately began to reply that it was my favorite color of Crayola crayon as a child – Violet Blue – but I had forgotten the name of the color. It was a wistful moment and kind of a metaphor for the loss of childhood, at least to me, and it got me thinking about crayons. The idea that followed was inspired by the general feeling of helplessness we are all feeling in the wake of our new reality.”

Participants are encouraged not to share answers or jump to the internet to solve tricky questions. All the crayons can be found by walking the streets and paths in the neighborhood.

The game will remain active until Governor Tony Evers lifts the “Safer at Home” order currently planned to last through at least May 26th.

And if you need something to listen to while you plot your route, the record store is open for curbside pickup with CDs, DVDs and vinyl records. Delivery is also an option. The store’s inventory is available online at Discogs, as is nearby Acme Records’ & Music Emporium.

“We spend our days in the shop working towards a future. Cleaning, sorting, pricing with the occasional curb side pick-up, just waiting til we can once again welcome people back inside,” said Rouleau.

Rush Mor first opened in 1971. It’s been owned and operated by Rouleau and Dan DuChaine since 1994.