A group is organizing a protest of the stay at home order, much like the one in Michigan. 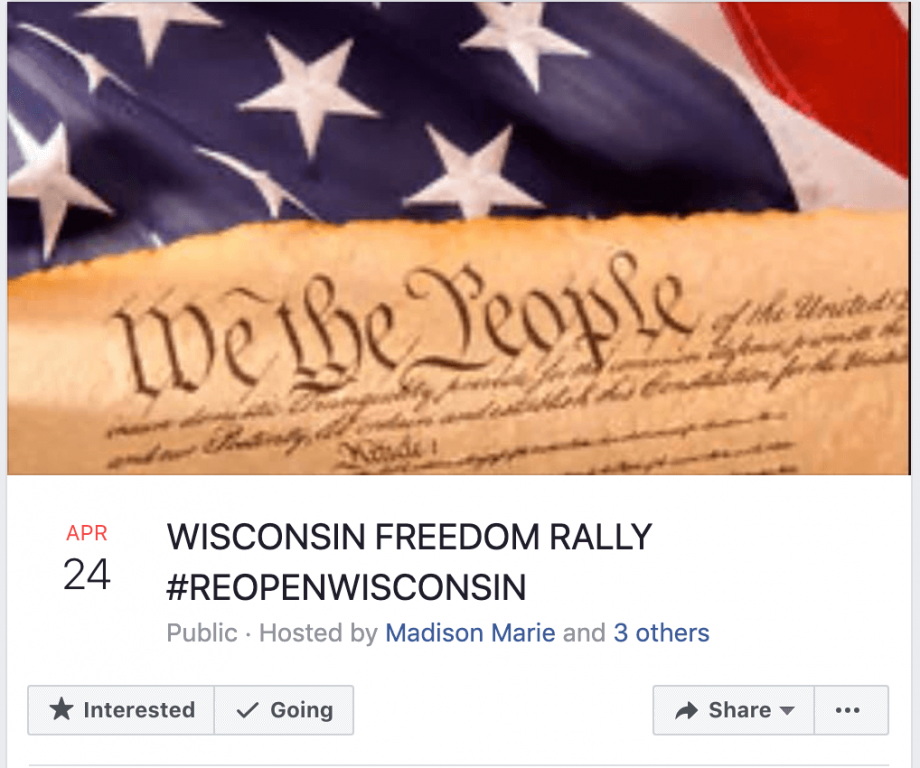 The Wisconsin rally is set to be held the day Evers’ order was originally supposed to expire — though it was extended to May 26 on Thursday. The order was put in place to slow the spread of COVID-19, which as of Thursday had infected 3,875 Wisconsinites and killed 197. 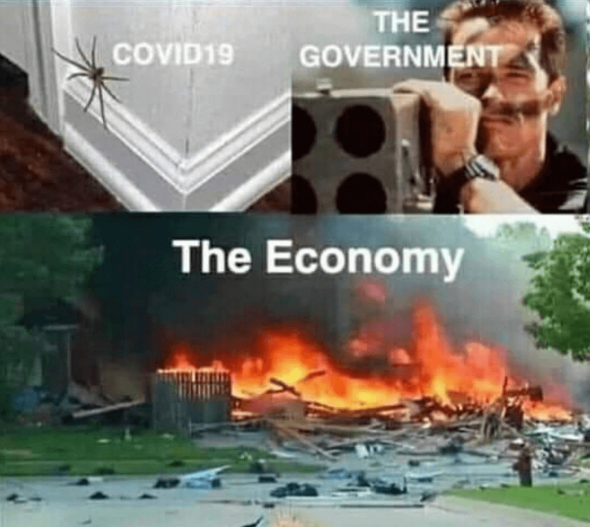 A meme posted to the #Reopen Wisconsin Facebook group.

Madison Elmer, a 33-year-old Walworth resident, is one of the event’s organizers and an administrator in the group’s 2,000 member private Facebook group, “#REOPEN WISCONSIN Liberty, Community, Rally & Action Page.” She told the Wisconsin Examiner that people have been so focused on the virus that people’s mental health and financial wellbeing is being left behind.

“We would like to open Wisconsin up and eventually have it how it was again,” Elmer says. “We want life to be back to normal. People are so focused and tunnel visioned on the virus. They’re all focused on that, nobody’s considering the rest of us and how we’re doing. We’re suffering out here.”

Representatives from the Madison Police Department and State Capitol Police said they wanted to balance the protesters’ right to assemble and the need to enforce the governor’s order.

Evers, who is the subject of most of the group’s disdain, said at a news conference Thursday he was glad people could exercise their first amendment rights even though the Safer-at-home order would still be in place when the rally is set to be held.

“The Capitol and its grounds have been part of exercising first amendment rights as long as I’ve been alive,” Evers said. “I’m sure if that happens [the rally] it will happen again. We’re encouraging people that do come to use social distance discipline so they can remain healthy.”

Elmer also said that any similarities to the Michigan rally’s white supremacist ties would detract from the intended message.

“Anything that does not demand respect and kindness to each other, I’m not okay with,” Elmer says. “People are entitled to their religion and beliefs, but if it is not respectful and kind and comes from a place of love, that’s not okay.” 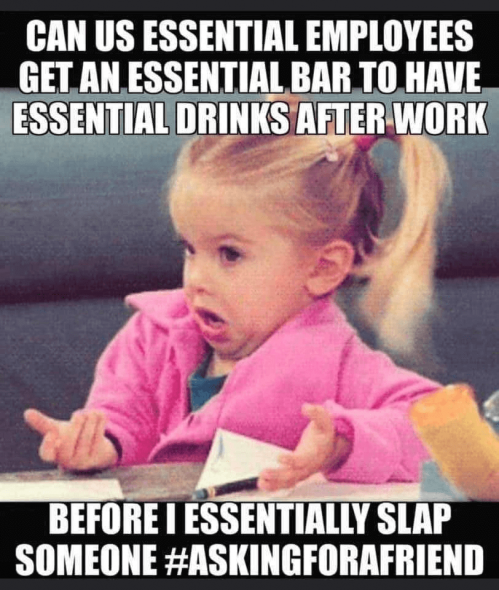 Many of the memes and comments posted in the group complain about restricted access to bars, stores and public areas.

Elmer, a small business owner, repeatedly said government officials weren’t considering people’s mental health when instituting stay-at-home orders, even though in early April the Wisconsin Department of Health Services (DHS) began an initiative to help Wisconsinites cope with the anxiety and stress of the pandemic.

She also said she was disappointed with the pandemic response from all levels of the government, identifying as an independent, she added the economics of the situation needed to be balanced with the advice of public health officials.

“I think it was poorly thought out,” Elmer says. “I am independent when I take political sides. I think people, like Dr. [Deborah] Birx and the Surgeon General and Dr. [Anthony]Fauci, they could’ve given so much better advice. Trump obviously doesn’t know how pandemics work. I don’t think they were working with the economists on this either.”

While outside of government, economists have warned of opening up the economy too soon.

As Elmer says the economists need to be involved, Dr. Laura Dresser, an economist and associate director at COWS, a “think-and-do” tank based at UW-Madison, says the right people are making the decisions and the economics need to follow public health directives.

“Following the advice of science and public health leaders and epidemiologists is what we need to be doing,” Dresser says. “Yes, it’s causing a lot of pain, but that doesn’t mean it doesn’t cause greater problems to open the economy.

Dresser added that the blame is being misplaced. It’s not the government’s fault the world shut down, it’s the virus’ fault.

“I think for everybody, this is a very hard time because it’s very hard to plan,” she says. “It’s emotionally and economically impossible to know what’s coming. I think the idea that somehow opening it will return the world to normal misunderstands the disease. It’s the disease that changed the world, it’s not the shutdown order. I get that people want it back, they want the world without COVID back, but that’s not the world we’re in.” 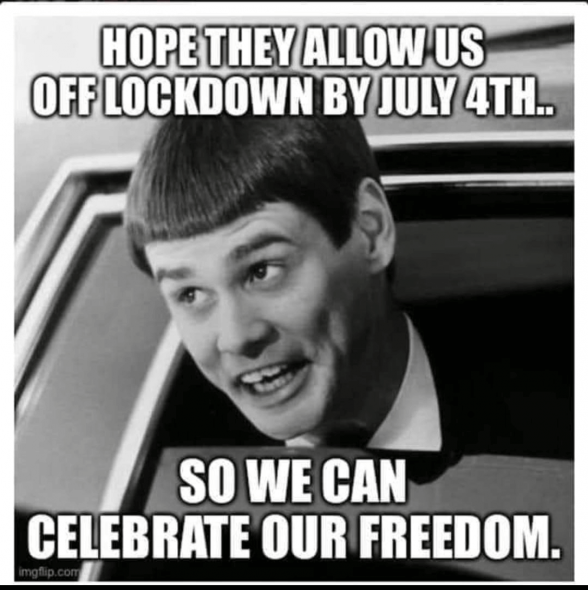 After Gov. Evers extended the safer-at-home order to May 26, commenters complained about the loss of Memorial Day festivities.

Elmer declined to comment when asked about a potential second wave of infections if orders are lifted too early. She also said data about the pandemic can be distorted, depending “how you’re doing the statistics and percentages,” saying Wisconsin’s infection rate is low compared to hot spots around the country — even though just a tiny fraction of Wisconsinites have been tested.

She cited Surgeon General Jerome Adams’ statement that 98% of people who contract the virus will recover. But she also said opening up the state would allow herd immunity to be built up, which requires a significant portion of the population to contract  the disease.

While the percentage of the population that needs to become infected to gain herd immunity for COVID-19 is unclear, the low end of estimates is around 60%. If that much of the Wisconsin population were infected, and 98% of them recovered — that still leaves nearly 70,000 dead.

Elmer, who lives in rural Walworth County, says she doesn’t understand why she’s under the same restrictions as someone in a much larger city. With 134 hospital beds, Walworth County’s capacity to handle a surge in cases is much lower than Milwaukee County, which has more than 5,000 hospital beds.

But aside from the mistrust for government and science circulating widely through the rally’s Facebook group. Aside from the libertarian streak and the anti-liberal bashing, the talk of recalling Evers and hate for “The Media,” there are many Wisconsinites in the group who are out of work and scared of what comes next.

They have questions that come from fear. Elmer said she was concerned shelter-in-place orders would stay in place for upwards of a year as the world waits for treatments or a vaccine. For a small business owner, a yearlong shutdown is devastating. Elmer is frustrated that  nobody has been able to tell her what comes next.

“It’s scary not knowing,” she says.

She adds that if someone said what the plan for getting back into the world was, she’d feel much better.

“You could mentally prepare, physically prepare, financially prepare,” she says. “Right now it’s just up in the air and everything keeps flipping back and forth. I really wish our governor, our government, our president would just say we don’t know. The biggest thing would be that it would be a mental reassurance that this would be over.”

Evers acknowledged the frustration and fear being felt by Wisconsinites right now, whether those feelings are over the virus or the response to it. He said that despite those feelings, he’ll continue to make the case for social distancing.

“There’s a lot of sacrifice that we’re asking and we’re getting from the vast, vast majority of people,” Evers said. “I’m guessing many of the people that’ll be protesting have accomplished some social distancing over the last couple weeks.”

In a response to a reporter’s question about whether he felt frustrated by the protest, Evers responded, “No it’s not a frustration. Clearly when we’re asking people to sacrifice in order to save lives and to make sure that as a state we’re healthier than we are now, some people may not get the message and basically focus on what’s being taken away.”

“I just encourage people to understand that if we isolate, if we stay at home, if we make sure that we have social distancing, we’re saving lives and making it shorter for the time that we spend in this situation,” he added. “Does it frustrate me? First Amendment rights are pretty cool and I think it’s a good thing, and we’ll continue to make the case that social distancing is critical.”

Elmer is one of those people feeling frustrated, and her outlet for expressing it has become the rally to totally reopen the state.

“It’s a fear of not being in control of your own destiny,” Elmer says. “Personally, I feel this is a show of power. The government is here to work for us, we’re not supposed to be controlled by the government.”

The Wisconsin Freedom Rally is scheduled to be held April 24 at 1 p.m. outside the Capitol.