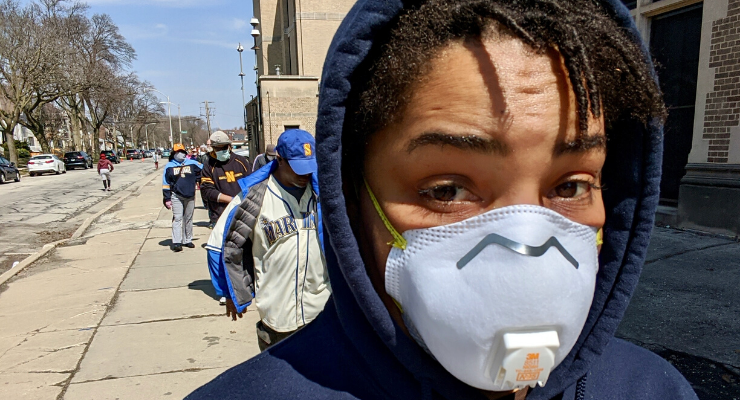 Ashley Norris refused to let the threat of contracting COVID-19 take away her voice Tuesday.

“As an African American woman, I think it’s my right to vote every time,” said Norris, who spent nearly two hours in line at the polling station at Washington High School. “I think that voting is one of the only times you get the chance to express yourself and be heard in a way that counts, literally.”

As for voting in person, she said, she didn’t have much of a choice. She never received the absentee ballot she requested early last week, so she stood in line, wearing a respirator and winter gloves before being handed medical gloves by an election worker.

She was among the thousands in Milwaukee who braved lines, some that spanned blocks, to cast their vote at one of only five voting centers operating across the city.

Voters like Norris had to choose between risking their health during a deadly pandemic or failing to exercise their constitutional rights. On Monday, Republicans won the showdown against Democratic Gov. Tony Evers, who had ordered in-person voting be halted on election day.

Benjamin Rodriguez, who lives on Milwaukee’s South Side, voted at South Division High School, his normal polling station. He said Tuesday’s election was unlike any he’d experienced.

He said election workers near the entrance of the school asked each voter if they were feeling sick before ushering them through a path that led to the gymnasium. People stood 6 feet apart, spaced by markers on the floor, in what he described as a well-organized effort to prevent the spread of COVID-19.

“There were about 60 poll workers and about 80 to 100 voters,” said Rodriguez, who cast his vote around 1:30 p.m. “Some were registering people. One person would bring your ballot, some ushering people around, and others cleaned voter stations and machines between each vote.” 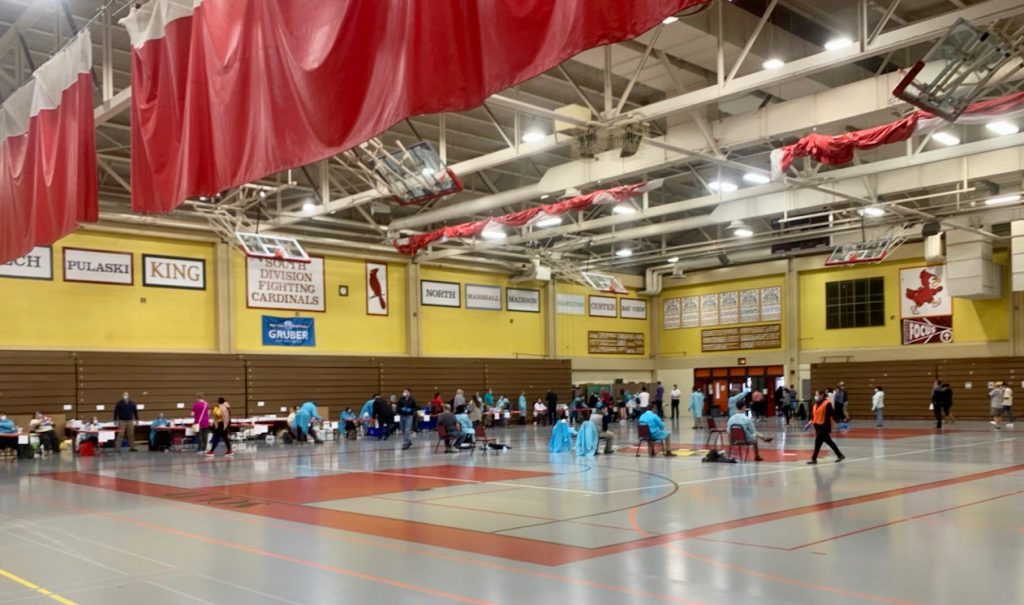 Although Rodriguez said it took him only 15 minutes to cast his vote, others reported much longer waits at South Division as the day wore on.

Molly Collins, advocacy director for the ACLU of Wisconsin, served as a poll observer at South Division. She said as the lines got longer, some began to walk away.

“A lot of people are deciding not to vote because they can’t wait in a two-hour line,” Collins said. “I mean it’s really impressive to me that the vote is so important to folks that they’re willing to go out and vote in person.”

Judging by many of the scenes shared across social media that featured Milwaukee polling stations, there were risks in doing so. Images showed long lines full of voters — some practicing social distancing and some not, some wearing masks and others barefaced.

It’s a chance that Ashley Olson, the mother of a 10-year-old daughter, was not willing to take.

“I didn’t feel like it was worth the risk, or that it was safe for me or others,” Olson said. “I feel like they put a lot of people in danger of being infected.”

Rivera, whose organization had been working to register absentee voters while also providing COVID-19 guidance in recent weeks, said it’s unbelievable that there were no measures in place to safeguard the voting process in the case of a national emergency, a catastrophe or what’s happening now with COVID-19.

“We don’t have to do a poll or debate on whether people should be alive or not,” Rivera said. “It seems that the human condition should be the priority of everyone right now, and we’re going against all natural protection to do [an election] we could do later.”

The safety of the voters and poll workers was also on the mind of Rick Banks, political director/organizer for Black Leaders Organizing for Communities, also known as BLOC. Banks said his organizers spent the day making calls to check in on residents and also organizing front porch pickups of absentee ballots.

“I think it’s just a tragedy that people had to risk their lives to cast their votes during an election that will have so many impacts,” Banks said.