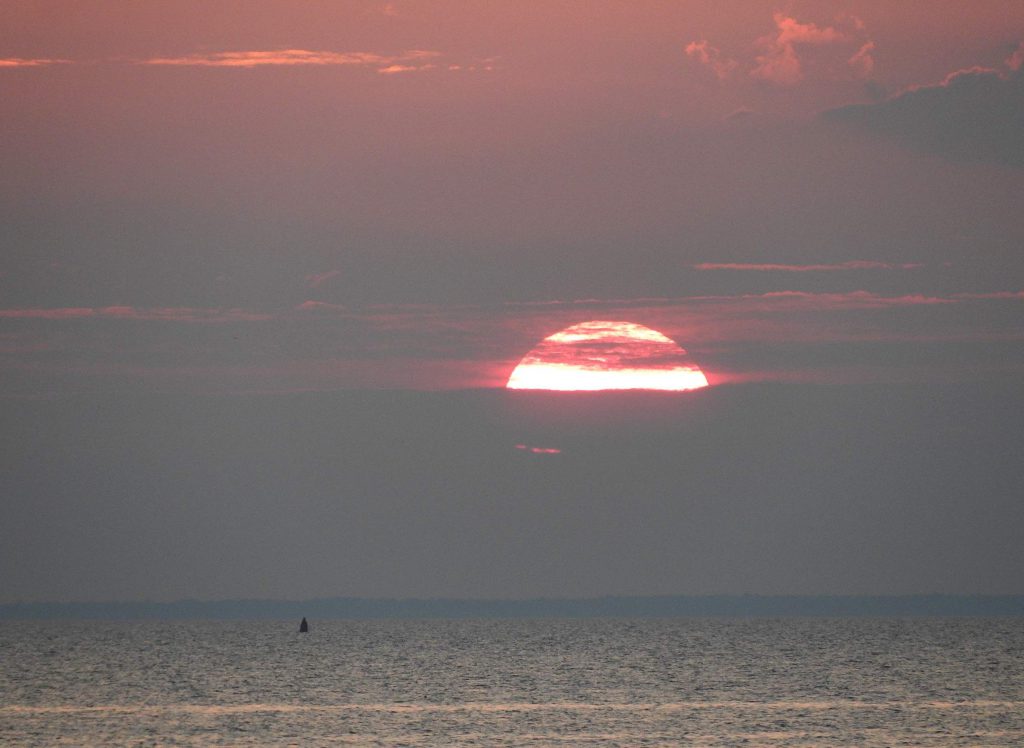 A summertime sun sets over the waters of Green Bay, as seen from Sunset Beach Park in Fish Creek in Door County. Photo by Brian Plunkett (CC BY 2.0)

Visitors to Door County spent an estimated $366 million in 2018. But, instead of preparing for another sun-kissed season on the water, Door County officials posted this notice last week:

“Due to the current health crisis, the Door County Welcome Center will close …We are uncertain when the center will open once again but will provide updates as they become available.”

A social media post by an Eagle River resident included a Wisconsin map dividing the state in half — roughly following Highway 10 from east to west — with this blunt message to the state’s more urban residents: Don’t come up here. Don’t threaten us full-time northern Wisconsin residents with your community’s COVID-19 virus.

Only about 5 percent of Wisconsin’s COVID-19 positive cases were confirmed north of that Highway 10 line last week, according to the state Department of Health Services.

In the 1930s, France built the Maginot Line – concrete fortifications, obstacles, and weapons – to deter a German invasion. Germany conquered France, however. In recent weeks, some northern Wisconsin counties have drawn a COVID-19 line asking visitors to stay away – the opposite of the welcoming and inviting messages they have spent millions of dollars sending over decades – and threatening those that do come.

It adds a unique Wisconsin dimension to the term “border wall.”

It also threatens visitors’ spending, which a state Tourism Department report said was a $13.3 billion part of Wisconsin’s economy in 2018.

The warnings are aimed both at those who own summer vacation homes or cottages, and who may want to ride out the COVID-19 pandemic in them, and visitors fleeing urban areas hard hit by the virus.

This warning from Ashland County officials specifically targeted our Illinois neighbors: “For vacationers and those with second or seasonal homes in Ashland County, please do not visit us now.  Abide by the executive orders issued by Governor Tony Evers. For Illinois residents with properties in Ashland County and the Northwestern Wisconsin region, abide by [Illinois] Governor [Jay] Pritzker‘s remain-at-home order.”

The “don’t come north” pleas are being issued for two reasons: Many year-round residents of northern counties are older. And Wisconsin’s rural hospitals cannot handle any COVID-19 surge of part-time residents and out-of-town visitors.

“Oneida County has one of the highest populations of older adults in the State of Wisconsin,” officials in that county said. “This population is at the highest risk of COVID-19; it is our priority to keep our older residents healthy and safe.”

Added officials in Vilas County, which reported its first positive case last week: “Due to our very limited healthcare infrastructure, please do not visit us now.”

Oneida and Vilas officials added: “If you are already back [here] … you must immediately self-isolate for 14-days.” There was no mention of how any 14-day isolation requirement would be enforced, however.

According to the 2010 Census, 30 percent of Vilas County residents were older than 65; in Oneida County, 26 percent, and Ashland County, 20 percent.

In a WisconsinEye interview last week, Dr. Mark Kaufman, the Wisconsin Hospital Association’s chief medical officer, said he agreed with the pleas of northern counties urging tourists and second-home owners to stay away during the crisis.

Appeals to protect rural health-care systems are common, he said. “Rural hospitals have relatively small staffs, and they have multiple roles,” Kaufman added. “That can really impact the ability of those hospitals and communities to provide care for their full-time residents.”

Some visitors to northern Wisconsin last week had different reasons for being there, though.

One Dane County couple had planned to spend spring break with their two young children in Florida, but Disneyland and other tourist attractions closed and there was the growing uncertainty of being exposed to the lethal virus by flying. So, they asked to rent a cottage for five days in a county that hadn’t issued a “don’t visit us” plea. The cottage owner, a family friend, quickly agreed.

And a widower in her 60s who lives alone in Madison emailed worried friends from her church explaining where she was, and why: “I am up north for the duration of this pandemic. Pretty much secluded here in the forest where I always feel closest to God while enjoying His creations.

“Then I watch the nightly news and am greatly disturbed by everything I hear. Then I must read from the [Bible] to find comfort and peace again.”

One thought on “The State of Politics: Northwoods Counties Say Stay Out”