What Will Green New Deal Cost?

And why is the research on this so sloppy? 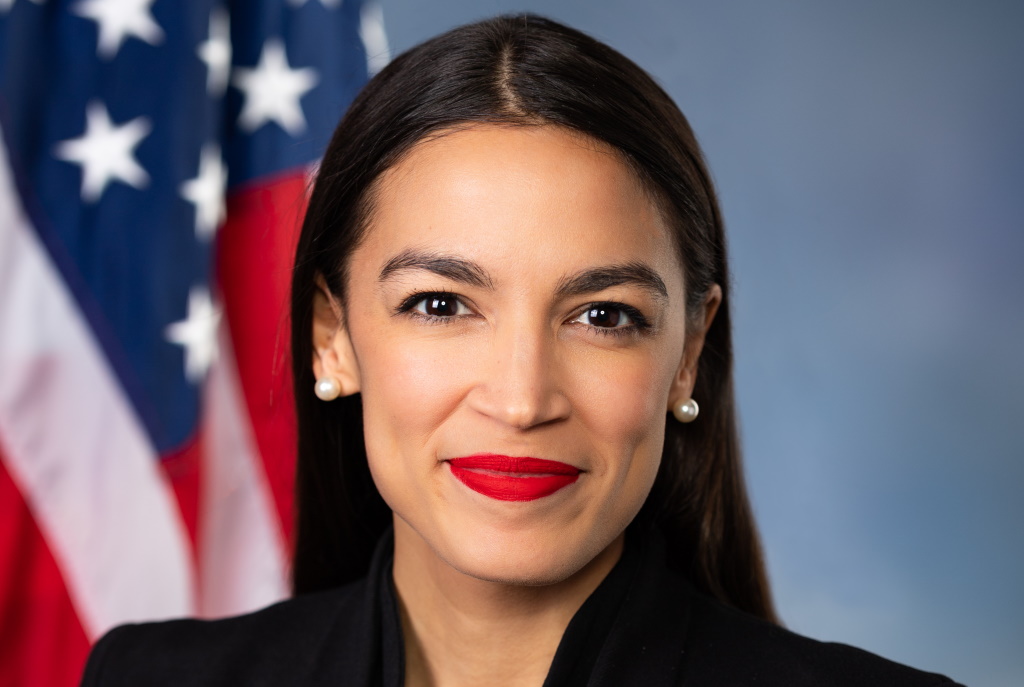 Alexandria Ocasio-Cortez. Photo is in the Public Domain.

The term “Green New Deal” is most often associated with a package of proposals submitted by Rep. Alexandria Ocasio-Cortez and Sen. Edward Markey. The core aim of the package is to reduce and eliminate the emission of greenhouse gases in order to reduce and eventually reverse global warming.

A new report from three conservative groups argues that the Green New Deal would be prohibitively expensive. Entitled, “What the Green New Deal Could Cost a Typical Household,” the report (hereafter referred to as the “GND report” estimates the cost of six proposals in the Green New Deal: green electrical power, high speed rail, green housing, green shipping, electric vehicles and organic farming. The figure below shows the GND report’s cost estimates for the first five of the six. 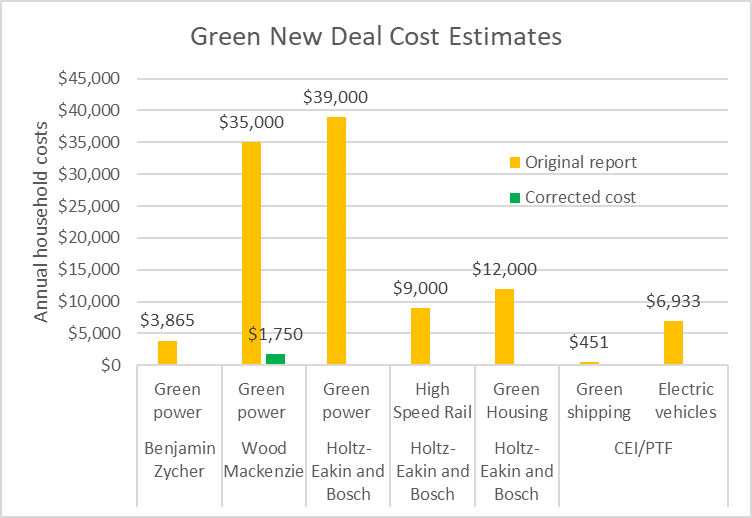 The GND report went through several iterations. First came a cost estimate of green electrical power by Benjamin Zycher of the American Enterprise Institute. Next, employees of two organizations, the Competitive Enterprise Institute (CEI) and Power the Future (PTF), added two more estimates of green power costs, from the consulting firm Wood Mackenzie and from Douglas Holtz-Eakin and Dan Bosch of the American Action Forum. They also added estimates of the cost of high-speed rail and “green housing”—retrofitting the built environment for maximum energy efficiency–from the same Holtz-Eakin and Bosch.

Finally, a Wisconsin touch was added. The Wisconsin Institute for Law and Liberty contributed an Addendum claiming the Green New Deal would harm farming by causing an 11 percent reduction in agricultural production. However, it is not obvious that farmers would be hurt by this. Wisconsin milk production has grown, while milk has lost market share to other beverages. As classic economic theory predicts, the result was lower prices, squeezing Wisconsin’s family dairy farms. Lower production might be good for Wisconsin’s small dairy farms.

The GND report’s glaring omission is any mention of global warming and its potential costs —the underlying reason for the Green New Deal and other proposals to reduce greenhouse gases. The Competitive Enterprise Institute, one of the GND report’s sponsors, has been a notorious denier of climate science. Does it still hope to wish global warming away?

In addition to confusing two universities, the GND report makes several serious errors. First, it has the Wood Mackenzie estimate for greening the U.S. power sector at $35,000 per household every year. However, the Reuters article which is the source of this number puts the cost at “$35,000 per household, or nearly $2,000 a year for a 20-year plan.” The corrected estimate is shown in green in the chart above.

This creates another puzzle. Why is the estimate from Holtz-Eakin ten or twenty times larger than the other two? The mystery deepens when one comes across the following: “Holtz-Eakin and Bosch estimate the costs of a ‘low-carbon electricity grid’ (at $5.4 trillion versus Zycher’s $8.95 trillion annual expenditures) …” Logically, this suggests that Holtz-Ekin’s estimate of household cost should be less than Zycher’s, not ten times more.

Why weren’t these errors caught, especially considering the GND report’s many iterations? I think a major contributor is groupthink. This GND report reflects a backward research process which starts with the conclusion—that the Green New Deal is prohibitively expensive—and works backwards from there. Except for Wood McKenzie, everyone involved in creating or reviewing these estimates had an ideological commitment to debunk the Green New Deal, a particular hazard today when both the writers and readers live inside the current right-wing thought bubble.

The second sponsor of this GND report, Power the Future, describes itself as “the voice of energy workers advocating for their jobs and communities …” In other words, its role is to defend the interest of the oil and gas industry against proposals to reduce or eliminate carbon-based fuels.

Some years ago, an executive at the Bradley Foundation told me that it preferred to co-fund research along with foundations with a liberal bent (a policy it appears to have dropped). Such co-sponsorship gave credibility to the research conclusions. In addition, it addressed a human blind spot. Mistakes are harder to see when they conform to our beliefs.

The response to climate change offers both threats and opportunity. Old jobs will disappear, but new jobs will appear. While costs shown in the GND report are likely overstated, a transition to green energy will certainly cost money. But much of this money will go to people holding the new jobs, such as those maintaining wind turbines.

It is better, I think, to help people impacted by a transition away from a carbon-based economy than to try to stop the transition. President Trump promised to bring back coal mining jobs. While the promise likely helped Trump win the 2016 election, it did little for coal miners. As the next graph shows, throughout the Trump administration, the number of miners has been stuck around 50,000, 0.03 percent of total US jobs. 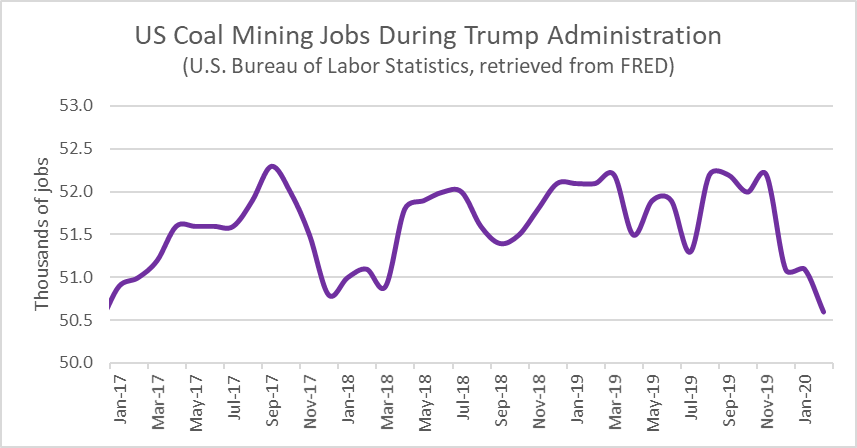 Meanwhile, US coal production has continued its downward trend. 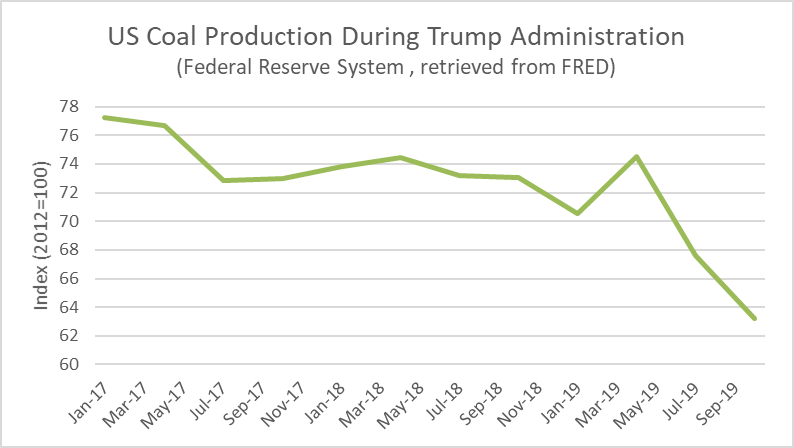 For a different view of green energy, consider Warren Buffett’s letter in Berkshire Hathaway’s current annual report. Noting that “Berkshire Hathaway Energy is now celebrating its 20th year under our ownership,” Buffett reports that in Iowa, rates charged residential customers by the other large investor-owned Iowa utility were 61 percent higher than BHE’s. He concludes that “the extraordinary differential between our rates and theirs is largely the result of our huge accomplishments in converting wind into electricity.”

Buffett goes on to predict that by next year output from wind will totally cover the annual needs of BHE’s Iowa customers. He also notes that “in 2000, BHE was serving an agricultural-based economy; today, three of its five largest customers are high-tech giants.”

One current challenge to wind (and solar) energy is that it is intermittent. When the wind is blowing in Iowa, BHE sells its excess energy to other utilities which use less carbon-based fuels as a result. But at some point, if green energy is to grow, there is a need for better ways to store energy.

One group working on storage limitation and similar obstacles is Breakthrough Energy. Its website lists five broad areas for research, including storage and battery technologies. In fact, members Bill Gates, Jeff Bezos, Michael Bloomberg, Richard Branson, and Jack Ma are among those investing in a venture to develop an alternative to the lithium-ion battery. The iron-flow battery is reputed to avoid the two biggest drawbacks of the lithium-ion battery, losing capacity the more they’re charged and occasionally catching fire.

The Climate Change Performance Index, published by groups in Germany, and Lebanon, is based on four factors: greenhouse gas emissions, renewable energy, energy use and climate policy. The next graph summarizes the ratings for the United Kingdom, all 58 nations in the study, the G20 group of nations, and the United States. The United Kingdom scores the highest among the G20 nations and is fourth among all nations (Sweden, Denmark, and Morocco score higher).

The United States scores at the very bottom among the 58 nations for the first time. The Index is particularly critical of its role at the international level, “with the US acting as a destructive player in international negotiations on all levels.” It also mentions the US intention to withdraw from the Paris Agreement on 4 November 2020. 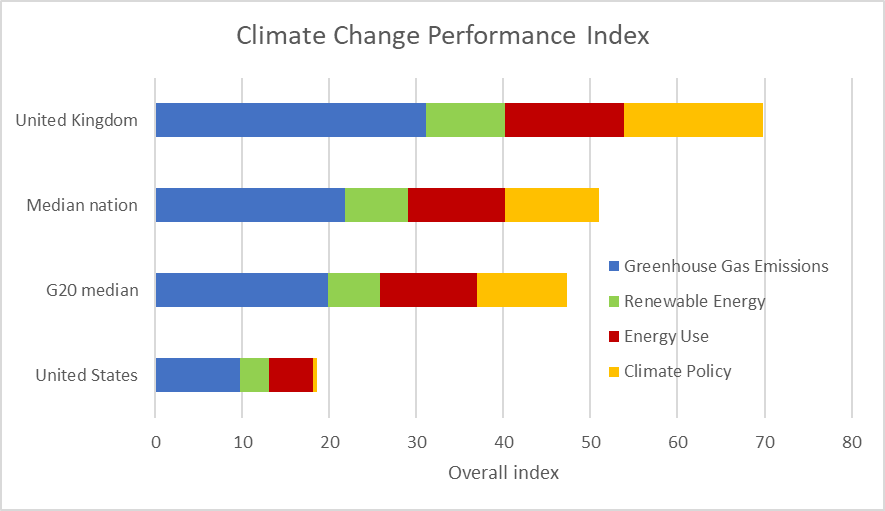 The Index is particularly critical of the United States’ turnabout on energy policy during the Trump administration:

Under the Trump Administration, the United States fails on climate action, with a major roll-back of national policies and becomes a disruptive force at all levels of international climate policy. Despite positive signals at the state level, the US remains at the bottom of very low performers.

In summary, the United States “receives very low ratings throughout all categories without exception. … On the national level, there is neither a target nor a policy for reducing the country’s very high GHG [greenhouse gas] emissions.”

Across the globe most conservative political parties, not just liberal ones, recognize that global warming is an existential threat. America is the exception, with its president and his Republican party continuing to treat global warming as a “hoax.” Currently the dominant strain in American conservatism is reflexively opposed to any efforts to reduce greenhouse gases, as reflected in the GDP report from three conservative organizations.

This is problematic for several reasons. Their opposition makes it less likely that global warming can be controlled before it causes more damage. In addition, it raises the odds that when new technology (better batteries, cheaper solar panels, and so on) comes, it will come from other countries rather than the United States, particularly if the “can’t do” philosophy migrates to the people running American business.

Capitalism, the market, and market-based solutions can be very powerful tools for solving problems. At a time when the world is facing intense challenges and opportunities, why has conservatism, along with the administration with which it is allied, lost its nerve?

2 thoughts on “Data Wonk: What Will Green New Deal Cost?”