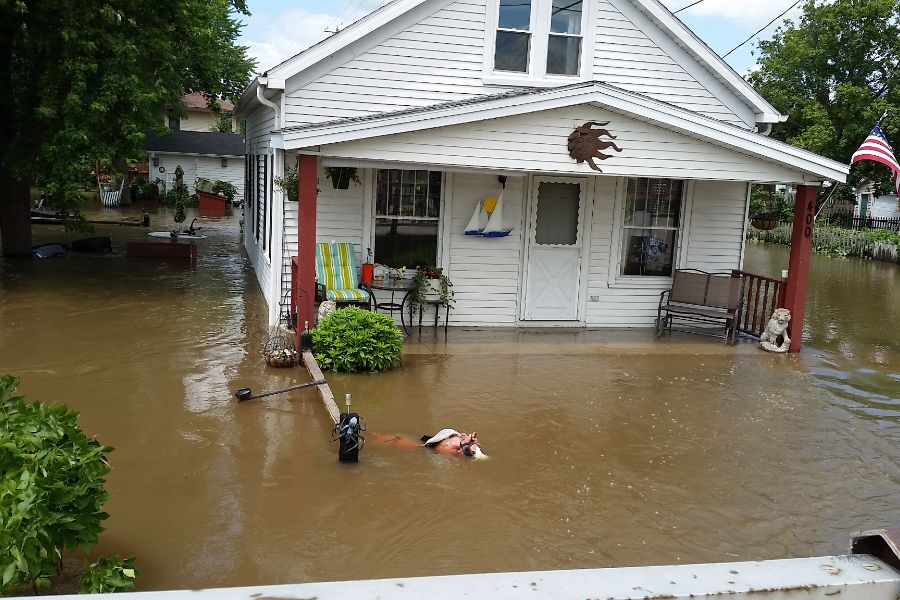 Fox River flooding in Burlington in 2017. Photo courtesy of the DNR.

Emergencies hit communities without notice and threaten our local economies. We are facing an unprecedented public health emergency right now, but we have faced emergencies before and we’ve become stronger from it.

Flooding in western Wisconsin has tested our communities’ responses to emergencies. Public health emergencies and flooding are dramatically different emergencies, but both require us to work together to keep our communities healthy and safe.

We’ve seen political leaders show up for photo opportunities when something dramatic happens, especially after a natural disaster. It’s not bad when leaders show up; it’s important they see firsthand what happened and be an advocate, but there’s more to do.  We need to know how we can prevent disasters in the future and how to support those affected by these events.

That’s why, just last week, I joined Governor Tony Evers for a visit to the Town of Dodge and the City of Arcadia. Last year, Governor Evers made the same visit when both places were flooded in Trempealeau County. Flooding has become an annual occurrence in these places. What we once called 100-year floods are now considered normal.

Flooding has not occurred yet this season and this was no photo opportunity with any press in Dodge. This visit occurred because Governor Evers hasn’t forgotten last year’s floods. Rather than wait until the next flood happens, the Governor and I want to continue the conversations we had last year with local government officials and introduce planning measures to address conditions that make flooding more frequent and severe in western Wisconsin.

Between 1950 and 2006, communities in every region of Wisconsin, have experienced an increase of average annual rainfall by more than 7 inches, according to the Wisconsin Initiative on Climate Change Impacts. The increase in rainfall, along with destruction of our wetlands and failing infrastructure, directly correlate to the escalating frequency of floods in Wisconsin. Together, these factors threaten our community’s public safety, health and economic security.

In the meetings, residents and local officials voiced concerns that flood prevention measures cost too much. Local town, city and county budgets are already stretched and cannot handle the expensive fixes needed to protect residents from flooding. That’s where the state needs to step up to the plate.

After the tour of Trempealeau County, Governor Evers, myself and several of my legislative colleagues introduced the Flood Prevention & Resilience Plan, a package of 6 bills directly targeted toward flood prevention and relief. This package of bills will:

These flood prevention investments will help local governments rebuild and prepare when the next flood emergency happens. I’m impressed by Governor Evers’ commitment to take proactive steps to help communities susceptible to flooding. Governor Evers didn’t show up for a photo opportunity in a disaster area. He came back when the cameras weren’t rolling to talk with people about how to make their lives better and communities stronger.

Now, it’s up to the Legislature to move forward on these proposals. In the meantime, remember to do everything you can to prepare yourself by getting flood insurance and staying educated by visiting FloodSmart.gov.