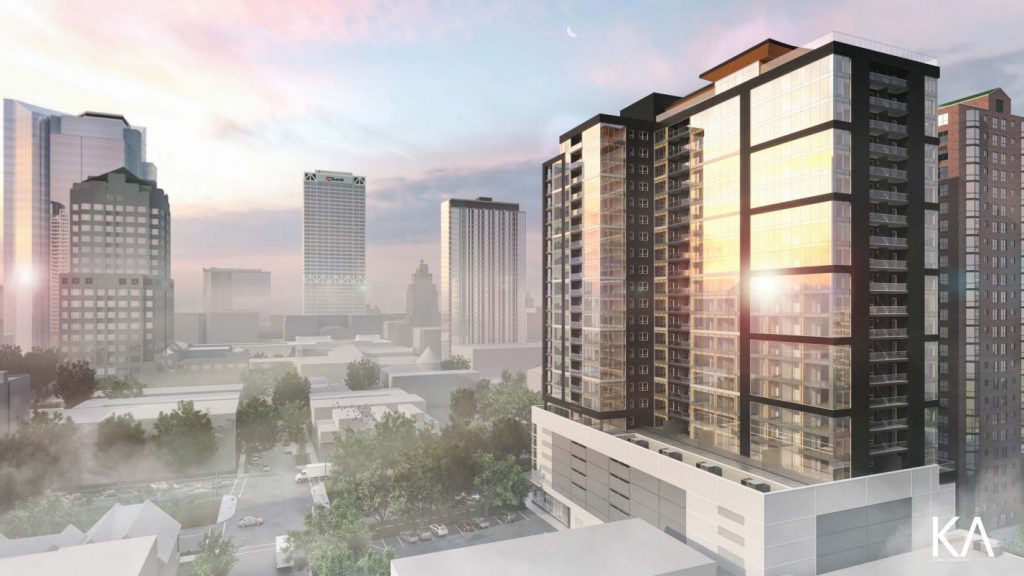 What could be the tallest timber tower in the world took another step forward Monday afternoon. The City Plan Commission unanimously recommended approval of a height increase for the previously approved Ascent tower, but not before one commissioner expressed concern that the revised design was a step backward.

New Land Enterprises is proposing to develop the 25-story apartment tower with mass timber, an engineered product made by combining layers of lumber into a stronger material. Korb + Associates Architects is serving as the project architect.

The currently proposed revision, first revealed in early February, marks the second time the developer has sought city approval to increase the height. Partners on the project, including New Land, Korb, Catalyst Construction and CD Smith and project consultant Swinerton, a firm with mass timber experience, have been refining the building’s engineering needs and unit mix.

The latest change would add two residential floors to the previously approved 23-story building, allowing up to 265 apartments and 335 parking spaces. It would push the building at least three feet past the tallest mass timber building in the world, the 280-foot Mjos Tower in Norway, but it would also reduce the number of balconies.

“I think there are a lot of substantial elevation and detailing changes that are being glossed over here,” said Commissioner and architect Allyson Nemec after architect Jason Korb and Department of City Development planning manager Vanessa Koster summarized the proposed changes. The smallest four units on each of the 15-unit floors would now be without balconies. Nemec, who’s become the most outspoken member of the commission since the passing of Whitney Gould, said earlier designs had more articulate detailing.

“I would respectfully disagree,” said Korb. He said the changes would produce more efficient unit layouts and that materials remain unchanged.

She asked Korb if new renderings, which make it harder to see the building’s exposed wood interior, were a change in the design. No, said Korb, “it’s a rendering change.” He said DCD officials reviewed the glass that would be used in the facade. “It’s a very clear glass,” said Korb. Developer Tim Gokhman and Korb have both said that the exposed wood interior would be a key selling point. He said the selected lumber would likely be white spruce that would be visible from outside the building.

“The loss of those balconies on the west side is a bummer. I guess unfortunate is a more professional term,” said Nemec. “That said this is an exciting project for the city.”

“This is going to be an exciting project for the city of Milwaukee in a space that’s long needed to be built,” said Commissioner Stephanie Bloomingdale.

The proposal will next go before the Common Council.

In addition to the new floors, the building’s first floor is two feet taller. The parking podium is also a foot taller, allowing space for an enlarged support structure to merge the timber components with the remainder of the building. “It turns out, timber grids and concrete grids don’t play nice together,” said Korb of the necessary tweaks atop the podium.

Deconstruction work is underway on the former Edwardo’s restaurant building at the project site at 700 E. Kilbourn Ave. New Land is in the process of raising financing and could start construction as early as May.

For more on the building, including mass timber, the site history and amenity information, see our Ascent building page. 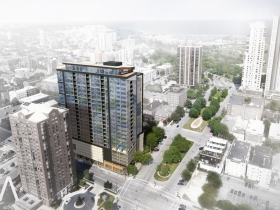 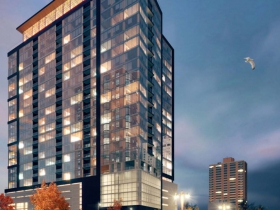 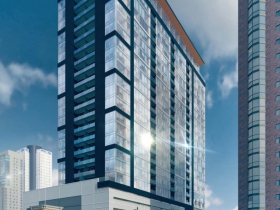 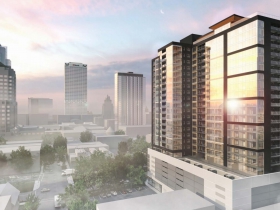 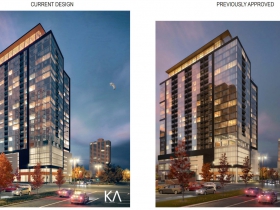 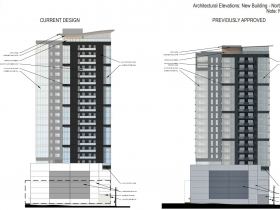 One thought on “Eyes on Milwaukee: World’s Tallest Timber Tower Gets First Okay”