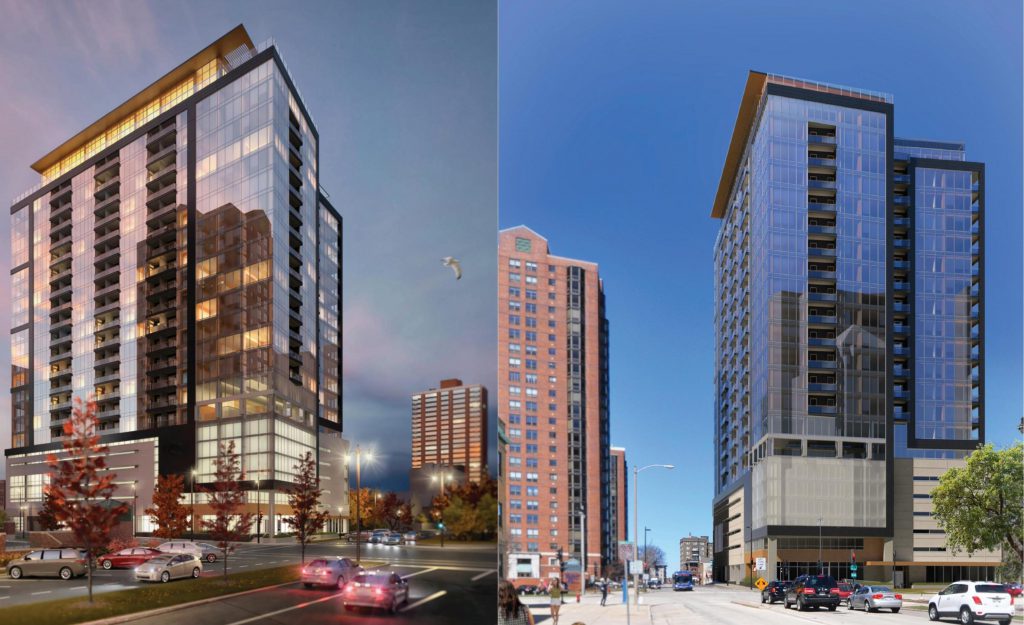 Often the final engineering results in market forces turning a sleek rendering into a much more meager building. With Ascent, a proposed mass timber tower, the opposite is slated to be true. What was planned to be the tallest mass timber building in the Western Hemisphere will now be the world’s tallest such building.

New Land Enterprises is seeking city approval to add two more floors to the proposed 23-story apartment tower, a net increase of four since it was first proposed. The change would take the proposed building from 238 feet and 23 floors to 283 feet and 25 floors in height and add 30 more apartments to the 230 already planned.

The additional floors will thus surpass the 280-foot Mjos Tower in Norway, making it the world’s tallest mass timber building.

Designed by Korb + Associates Architects, the tower relies on an engineered product made by combining layers of lumber into a stronger material. The material is capable of building much taller buildings than conventional wood construction methods because it only chars (rather than burning through) in a fire and offers enhanced strength. Earlier this year a model unit passed a three-hour fire test.

The building material is spreading quickly from Austria, where it was invented, and the Pacific Northwest, where it has been most commonly implemented in the United States. New Land director Tim Gokhman expects the Ascent record will eventually be broken. “I know that our record probably wouldn’t stand for a super long time and I think that’s great,” said Gokhman, an advocate of mass timber technology.

The changes were enabled by coordination on the size and location of heating ventilation and air conditioning equipment. Gokhman said space set aside by Korb’s firm in the planning process ultimately wasn’t needed. Review of space needs with project subcontractors for everything from elevators to the building’s radiant heating system identified space savings.

“We were able to move the storage lockers to the first floor,” said Gokhman. The tenant storage space was originally planned to go on the parking levels. That move yielded space in the building’s podium for 28 more parking spaces. From the exterior, the parking garage will not look different.

The height of the first floor will increase from 11 feet to 14 feet as part of the revision, yielding a more visible, attractive lobby said the developer.

New Land, through a joint venture of Catalyst Construction and CD Smith, plans to formally start construction in May or June, said Gokhman. The Portland office of general contractor Swinerton is also supporting the mass timber component of the project. It will take approximately 21 months to construct from that point, but don’t expect to see a wood tower immediately emerge. A six-story concrete podium will first be constructed as well as concrete stair columns.

Gokhman said 50 percent of the equity required for the project has been raised, giving the firm enough comfort to start construction. “There is zero doubt in my mind that we are going to build,” said the developer in January. “We are building the building.”

Deconstruction is underway on the vacant commercial building on the site at 700 E. Kilbourn Ave. Test piles are being driven into the site.

The revised design requires Common Council approval because the proposal does not comply with the base zoning for the site. The council unanimously granted approval for the building’s design and the fall 2019 revision.

Gokhman and architect Jason Korb have said during multiple zoning hearings on the project that mass timber offers not only environmental benefits as a carbon sink and lighter building material, but also will offer market benefits through the aesthetics of exposed wood.

The project was first unveiled in October 2018 to include 201 units with a mix of high-end one-, two- and three-bedroom floor plans. Gokhman said the firm has been revising the floor plans and had settled on 230 before adding the two floors.

A pool is planned on the sixth floor with fully operable windows. A sauna, steam room and entertainment center are also planned for what the firm is calling a “wellness floor.” The top floor of the tower will include a resident amenity level with two outdoor decks, fire pits, grilling stations, a clubhouse, kitchen and co-working space.

The building will be the city’s second mass timber structure. Ann Pieper Eisenbrown celebrated topping off her four-story mass timber addition to the Louis Bass Building at 331 S. 3rd St. in early December. And New Land has a seven-story, mass timber office building planned for Westown.