Justice Dan Kelly seems to side with those out to destroy the “administrative state.”

On April 25, 1836, the steamship Moselle stopped at Fulton Ohio to pick up two families en route to Louisville. While the passengers boarded, Captain Perrin kept the four boilers full of steam so he could make the fastest possible getaway. The Cincinnati Whig described what happened next:

At the very moment her wheels made the first evolution, her boilers burst with a most awful and astounding noise, equal to the most violent clap of thunder. The explosion was destructive and heart rending in the extreme. … Heads, limbs, bodies and blood were seen flying through the air in every direction, attended by the most horrid shrieks and groans from the wounded and the dying.

The horrific Moselle disaster led to Congress passing its first act aimed at protecting the consumer. It created an agency in the Treasury Department charged with inspecting steamboat boilers. It is often credited—or blamed–with creating the so-called regulatory state.

In the 180 years since the Moselle explosion, the so-called “administrative state” has grown impressively, along with criticism. This criticism has come from several directions.

One is that regulatory agencies are often captured by the industries they are meant to regulate. The classic example is the Federal Commerce Commission, which ended up protecting the profits of railroads and trucking companies by creating barriers to entry. Contributors to regulatory capture include the fact that the issues the agencies consider are often very technical and only the companies being regulated have the incentive and resources to master them and that agency employees may hope to get more lucrative jobs with those companies.

A possible recent example include the Federal Aviation Agency’s deferral to Boeing on safety of the new 737 Max passenger airplane. Another example is the lack of skepticism by federal financial regulators towards the risks of unorthodox financial instruments like derivatives, helping lead to the Great Recession.

Another stream of criticism is ideological. The objection to government regulators by right-wing conservatives revolves around a different issue—whether the American system of regulation threatens liberty. That issue arose in the back-and-forth between the two factions of conservative Wisconsin Supreme Court justices who formed the majority in the Koschkee decision. Together, they voted to give the governor veto power over rules issued by the Superintendent and Department of Public Instruction. As discussed in last week’s Data Wonk column, this seems to me to violate the clear intention of the Constitution’s authors not to hand education to the governor. It is particularly jarring coming from people who repeatedly proclaim their devotion to the Constitution.

The argument between the court’s conservative justices seemed triggered by a short paragraph–¶17—in the majority decision written by Justice Patience Roggensack. The first line of this paragraph goes: “We have long recognized that ‘the delegation of the power to make rules and effectively administer a given policy is a necessary ingredient of an efficiently functioning government.’” This is followed by quotes from several previous decisions, making the same point.

Two justices respond negatively to this sentiment. Here is Justice Daniel Kelly’s concurrence in its entirety: “I join the majority opinion except with respect to ¶17.”

Justice Rebecca Bradley, by contrast, wrote a 13-page “concurrence” arguing with Roggensack. She starts by agreeing with the majority’s giving the governor a veto of DPI rules, but then goes on the attack:

I join the opinion except for those portions espousing the ostensible importance and necessity of the legislature’s delegation of power to the administrative state. … The concentration of power within an administrative leviathan clashes with the constitutional allocation of power among the elected and accountable branches of government at the expense of individual liberty.

The Bradley argument is heavily dependent on quotes from Justice Clarence Thomas such as this:

The idea that the administrative state is necessary for good and efficient government “reflects this belief that bureaucrats might more effectively govern the country than the American people” and facilitated “the progressives ushering in significant expansions of the administrative state, ultimately culminating in the New Deal.” … Underlying the movement toward a burgeoning administrative state was the governing class’s sneering contempt for the people who elect its members, along with impatience at any resistance of the people to the views of the enlightened.

Along the way, she also quotes numerous right-wing authors and law professors. All told, there are numerous assertions, but little evidence offered, of the supposed loss of “individual liberty.” One comes away with the impression that she is a true believer writing for other true believers. A quick Google search on “administrative state” turns up a who’s who of right-wing organizations, including the Heritage Foundation, the National Review, the Wall Street Journal editorial page, Forbes, Ricochet, Steve Bannon, Reason, and Rush Limbaugh.

Even Justice Roggensack seems a bit taken aback by Bradley’s essay, writing that “the case before us does not present issues that should give rise to a dogmatic exposition on the merits, or lack thereof, of administrative agencies.” (To which Bradley responds in a footnote, “I agree with the majority that the issues in this case do not require an “exposition”——”dogmatic” or otherwise——of the constitutional legitimacy of the administrative state. … I write in response to the majority’s endorsement of the necessity of delegating legislative power to administrative agencies.”)

There are several reasons that Congress has expanded regulatory agencies since the Moselle blew up. One is the growth of technology: new inventions (like steam power) bring new hidden dangers. Related to this was an increasing need for specialized expertise. Finally, sometimes it was a way to solve a conflict of interest problem. Usually, for instance, we don’t let candidates administer their elections.

An example of the conflict of interest problem is the redistricting of legislative districts. As the Republican Wisconsin legislators amply demonstrated in the 2010 redistricting of seats, it can be hard for legislators to resist the temptation of giving themselves and their party an electoral advantage.

By all accounts, Elbridge Gerry was an admirable person. A signer of the Declaration of Independence and the Articles of Confederation, he refused to sign the Constitution because, at the time, it did not include a bill of rights. He was elected the governor of Massachusetts and finished his life as James Madison’s vice president. Yet, ask most people what they know about him and the response is “gerrymander” named for the odd-shaped district that he designed to advantage his party.

Looking to redistricting following this year’s census, Governor Tony Evers proposed a non-partisan commission. Included in the proposal were restrictions on the membership aimed at excluding partisans and requirements for the final maps. This was quickly rejected by Republicans Robin Vos and Scott Fitzgerald, the legislative leaders.

One argument stated for rejecting the commission is that the state and federal constitutions both have language giving redistricting responsibility to legislatures. In fact, an article on the MacIver Institute website “takes Governor Evers and Attorney General Josh Kaul to task over their breathtaking constitutional ignorance” for their belief that the Legislature could delegate redistricting to a non-partisan commission. MacIver’s argument is particularly implausible considering that in 2010 the Republican Legislature delegated redistricting to the Michael Best law firm that proceeded to develop maps in secret.

Another argument often made against delegation is that it is anti-democratic because it replaces elected legislators with unelected bureaucrats. But this ignores the fact that Congress normally establishes a new agency in response to public pressure to solve some problem.

A question on the latest Marquette Law Poll asked, “As you may know, redistricting involves redrawing maps of legislative districts for the state legislature and for Congress. In your opinion, who should be responsible for drawing legislative districts — the state legislature and governor or a non-partisan commission?” Over the two polls about 70 percent chose the nonpartisan commission versus 20 percent governor and Legislature. Marquette poll results combined from January 2019 and February 2020 (a total of about 1,300 registered voters). 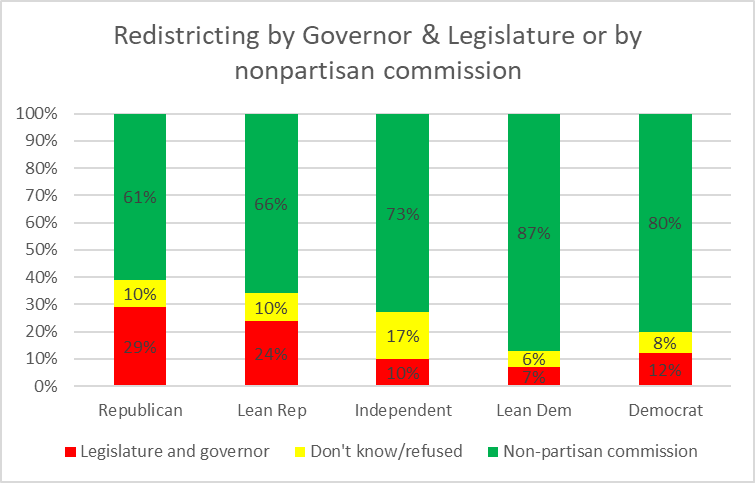 For most voters, including most Republicans, the conflict of interest inherent in having legislators chose their own districts is evident.

Despite their denunciations of the “administrative state,” neither Justice Bradley, nor the many right-wing authors and judges she quotes, is able to identify the specific harms she insinuates it causes or what might replace it if it were to go away. Allowing one party to entrench itself in power, for example, is hardly a victory for democracy.